A SWAT Team Destroyed This Innocent Woman’s House While Chasing a Fugitive. The City Refuses To Pay for Damages. – Reason.com


What’s a home worth?

It’s a tough question, and it’s one that Vicki Baker found herself trying to answer the hard way after a SWAT team mutilated her house in McKinney, Texas, during a standoff with a fugitive who had barricaded himself inside.

Prior to the SWAT showdown, Baker’s daughter, Deanna, gave officers a key to the home, as well as a garage door 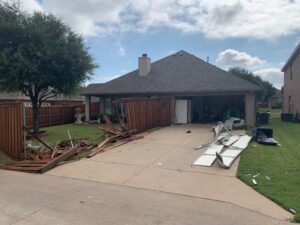 “It was after the insurance company told me there was no coverage that I really fell apart,” Baker adds. The company furnished a clause that protects them from liability in cases where the government is at fault for the damage. But the city demurred: There would be no coverage from them. She was not a victim, according to the state.

On July 25, 2020, news broke that a man named Wesley Little had kidnapped a 15-year-old girl. He arrived at Baker’s home, where he had done some work as a handyman about a year and a half prior; Baker had terminated him after Deanna said she felt something wasn’t right.

It was Deanna who answered the door that day. Having seen the news reports, and frightened for her safety, she let him in, left the home, and called the police. Little eventually released the girl unharmed but refused to leave himself, which is when the SWAT team swooped in. After destroying the house, they found Little inside, dead from suicide. 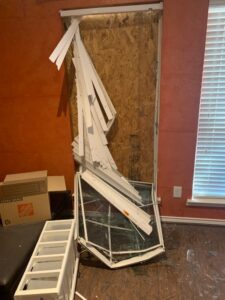 Baker had recently located a buyer for the home. The 76-year-old, who is battling stage 3 breast cancer, was set to begin retirement with her husband in Montana. Predictably, the sale fell through, as the house was no longer livable. She spent about $50,000 making repairs, a chunk of which she took from her retirement, though some things couldn’t be remedied: An antique doll collection from her late mother, which she hoped to gift to her granddaughter, was left covered in tear gas, and her daughter’s dog was rendered deaf and blind. Baker eventually landed another buyer—for significantly less than she did prior to police declaring war on the structure.

Over the last year, debates around law enforcement accountability and immunity have rapidly moved from little-known doctrines to dinner-table conversations. The legal concept central in Baker’s case has yet to gain traction in the mainstream dialogue, however: The Takings Clause of the Fifth Amendment requires that the public be compensated for property taken or destroyed by the government, but some lower courts have bafflingly exempted state actions from that if they were pursued under “police power.”

A lawsuit filed by the Institute for Justice (IJ) in the U.S. District Court for the Eastern District of Texas aims to clarify that.

“They’re forcing unlucky individuals to shoulder the burden of doing something that’s good for society,” says Jeffrey Redfern, an attorney with IJ. “Taking dangerous criminals off the street is good for society. If the city decides that it really needs to put a road through your house, that might be the right call. It might be something the community really needs. But that doesn’t justify making one unlucky owner bear the cost of doing something that’s good for everyone.”

Whether or not the police needed to attack the modest McKinney home with brute militaristic force perhaps more appropriate for a battlefield is indeed an important topic for debate. “I have a very high regard for the police,” says Baker, who identifies as a Christian conservative. “I’m very grateful for them.” But she remains skeptical of their tactics that day: “I thought it was a bit over the top,” she adds. She tells me she in no way supports calls to “defund the police” but she sees a need for reform.

Baker is not the first to lose her home to SWAT tactics gone awry, nor is this the first such case picked up by IJ. SWAT agents in 2015 totaled a $580,000 house in Greenwood Village, Colorado, while in pursuit of a shoplifter who had broken into the residence. The city handed the family a cool $5,000, and the Supreme Court subsequently declined to hear the case. Just last summer, police in Charlotte, North Carolina, decimated a home as they tried to coax a suspect out. The problem: He wasn’t even there.

I ask Baker how she’d like to see this nightmare end—what exactly would bring closure? “I’d like to get some of this money back,” she says. “I would. But the main reason I wanted to do this, and go through whatever it took to do it, was to set [a] precedent.”