Why this Religious Freedom Case is Different From the Others – Reason.com 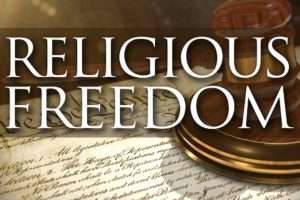 On Wednesday, the Supreme Court will hear oral arguments in  an important religious liberty case, Fulton v. City of Philadelphia. Because it is coming the day after election day, Fulton isn’t getting as much public attention as it deserves. But the case is a very significant one, for multiple reasons. In this post, I focus on a key angle that makes this case very different from most other prominent religious-liberties claims in recent years: the fact that a win for the plaintiffs could cause serious harm to innocent third parties who have no way to avoid it.

Fulton is a challenge by  Catholic Social Services (CSS) and others, to the City of Philadelphia’s policy of refusing to place foster children with private service agencies that reject same-sex couples as potential foster parents. CSS refuses to do so for religious reasons, due to the Catholic Church’s opposition to gay marriage and same-sex sexual relationships more generally.

CSS contends that the City is discriminating against them based on religious beliefs, and that the Free Exercise Clause of the First Amendment entitles them to an exemption from even a neutral antidiscrimination policy. To prevail on the latter point, CSS would need to persuade the Supreme Court to overrule or at least substantially limit the scope of its 1990 decision in Employment Division v. Smith, which held that, as a general rule, there is no constitutional religious-liberty exemption from neutral, generally applicable laws.

Smith was written by conservative Supreme Court Justice Antonin Scalia. At the time, it was heavily criticized by many liberals, while most conservatives supported it. Since then, the culture wars have shifted, and overruling Smith has become a major objective of social conservatives, while most liberals would prefer to keep it in place.

The fate of Smith is the main reason why this case has caught the eye of legal commentators understandably so. But there is another crucial angle that deserves greater consideration.

In most prominent religious-liberty cases, the the issue at stake is either the government discriminating on the basis of religion (as in the travel ban case and the recent Espinoza Blaine Amendment case),  or the state requiring private businesses to provide services that violate their religious beliefs, to willing customers or employees (as in the 2014 Hobby Lobby case and various cases involving photographers and bakers unwilling to serve same-sex marriages). The 2018 Masterpiece Cakeshop case raised both issues.

In cases like Hobby Lobby and Masterpiece Cakeshop, the workers and consumers involved had the option of going elsewhere. While Hobby Lobby’s religious commitments led them to refuse to provide contraception benefits to employees, the vast majority of employers (like the vast majority of Americans generally), have no such objections. Employees who value those benefits, accordingly, have many alternatives to working at Hobby Lobby. Indeed, workers as a class  benefit from allowing diversity in benefits, as some might prefer an employer who—instead of providing contraception benefits—offers higher pay or better benefits of some other kind. Similarly, same-sex couples have many alternatives to going to bakers or photographers who object to their wedding. Indeed, most such couples are likely to be better off choosing contractors who don’t have any such objections. Those who do object are unlikely to do a good job of helping to celebrate an event they abhor.

The situation in Fulton is very different: orphans and children in the foster care system—especially younger ones—generally do not have much choice when it comes to deciding which social service organizations will handle their cases. If they end up with CSS or another organization with similar views, they will lose the chance to be placed with a same-sex couple, even if that family is actually the best available home for the child in question. In that event, the child could be placed in a foster home less well-suited to her needs, or even none at all. Unlike people in search of a baker or a photographer,  children in the foster-care system generally don’t have the option of simply taking their “business” somewhere else.

This might not matter if you believe that religious-liberty claims are entitled to an absolute exemption from generally applicable laws. But most advocates of overruling Smith do not take any such absolutist position. Instead, they  generally support something like the “compelling interest” test that Smith overruled, which would allow restrictions on religious freedom so long as they are necessary to promote a compelling government interest. For example, virtually no one claims that religiously-motivated killers are entitled to an exemption from laws against murder and terrorism.

Placing foster children with the best available caregivers is pretty clearly a compelling interest, if anything is. And in this instance, unlike Hobby Lobby or Masterpiece Cakeshop, there may be no other way to ensure that the people in question can get the services they need. Unlike most customers and workers, the children are a captive market whose fate largely depends on decisions by government officials.

It’s also worth noting that the argument put forward by the plaintiffs in Fulton could just as easily be used by service organizations who have religious objections to placing children with interracial or interfaith couples. A few religious groups still condemn the former, and many more object to the latter. In that scenario, few would contend that the state must make use of these agencies without requiring them to consider potential foster parents irrespective of the  latter’s race or religion.

The issue of third-party harm may not be dispositive in the case. It obviously may not matter if the Supreme Court chooses to reaffirm Smith.

Furthmore, in addition to arguing for overruling or cutting back on Smith, the plaintiffs also contend that city officials discriminated against them based on “animus” towards their religious beliefs. My George Mason University colleague Helen Alvare—a prominent expert in this field—has a good defense of the latter argument here.

If she’s right, the Court could rule in favor of CSS without concluding that religious organizations are generally entitled to exemptions from this type of antidiscrimination policy.  While Helen makes good points, I remain skeptical that the City would have treated CSS differently if only the latter’s objections to same-sex couples were secular in nature or based on non-Catholic religious commitments. But I will not try to analyze the discrimination issue in detail here. It is enough to note that it potentially provides an alternative basis for CSS to win the case, one that would not require overruling or modifying Smith.

As a matter of policy, it might sometimes be better to place foster children with agencies that have discriminatory policies, if the available alternatives are even worse (e.g.—the children cannot be placed at all). But the issue at stake in Fulton is not whether the Constitution forbids such placements, but only whether the state should be allowed to avoid them.

When it comes to religious freedom cases, I am no slouch about the need to place tight limits on government power. I supported the plaintiffs in Hobby Lobby, the travel ban case, the Blaine Amendment case, Masterpiece Cakeshop, and various other cases on related issues. And I have done so even when I find the plaintiffs’ religious beliefs abhorrent, as with religious opposition to contraception (Hobby Lobby) and same-sex marriage (Masterpiece Cakeshop). I have criticized those on both right and left whose stances on these types of cases tends to vary based on whose ox is being gored.

But the issue in Fulton is very different from most other cases. And that difference might justify a ruling in favor of the government, even from a standpoint that is highly supportive of religious liberty claims in other contexts.