Here’s Who Has Tested Positive for COVID-19 in Congress and the White House – Reason.com


Since President Donald Trump’s announcement late last week that he and his wife have the coronavirus, several White House officials, members of Congress, and others who interacted with the president have announced that they too have tested positive.

Since last week, three Republican senators—Mike Lee of Utah, Thom Tillis of North Carolina, and Ron Johnson of Wisconsin—have said that they have the virus.

“Lee and Tillis, both members of the Judiciary Committee, attended the Sept. 26 Rose Garden ceremony where Trump announced his selection of [Amy Coney] Barrett, with more than 150 guests sitting shoulder to shoulder, most not wearing masks,” reports The Washington Post. The Rose Garden event is suspected to be the site of initial spread for Trump and his allies.

Pence is now “the GOP’s one line of defense between a hospitalized commander-in-chief and a President Nancy Pelosi, and he’s about to depart Washington on a four-day campaign swing in the middle of his boss’s health crisis,” notes Politico.

Tonight I tested positive for COVID-19. My symptoms are mild (light cough) and I’m feeling fine. I have begun a quarantine process in consultation with physicians.

As always, my heart is with everyone affected by this global pandemic. ❤️

So did University of Notre Dame President John Jenkins, who was at the Barrett event in the Rose Garden, and Republican National Committee Chair Ronna McDaniel. And so did former New Jersey Gov. Chris Christie.

I just received word that I am positive for COVID-19. I want to thank all of my friends and colleagues who have reached out to ask how I was feeling in the last day or two. I will be receiving medical attention today and will keep the necessary folks apprised of my condition.

The president himself is reportedly doing better, after being taken to Walter Reed Medical Center on Friday, experiencing “drops in his oxygen saturation,” and being put on steroids and other coronavirus-treatment drugs. But a series of seemingly staged “work” photos and a flurry of conflicting information from White House sources and Trump’s doctor have a lot of people doubting the accuracy of any news on this front. 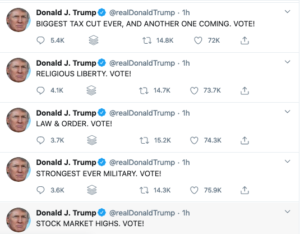 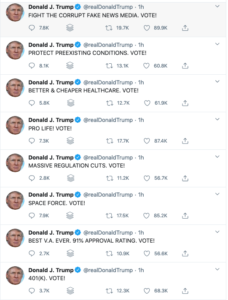 On Sunday night, Trump took an SUV joy ride, which many have been criticizing for putting the car’s driver and secret service agents at risk.

• Homeland Security is proposing a rule to “hold immigrant sponsors accountable for failing to meet the obligations of contracts they sign with the federal government.” U.S. Citizenship and Immigration Services announced last Thursday that “the proposed rule would require those who sponsor a green card for an immigrant to provide—along with the affidavit form—credit reports and credit scores, certified copies of income tax returns for the last three years, and bank account information,” reports the Miami Herald.

• Texas Attorney General Ken Paxton’s staff is accusing him of bribery and other misconduct.

• Video shows a Kansas City, Missouri, police officer kneeling on a pregnant woman’s back after she allegedly interfered in an arrest they were making at a gas station.

• Pennsylvania lawmakers won’t stop pushing a reinstatement of inflexible mandatory minimum sentencing schemes, which do away with judgicial discretion at sentencing in favor of a one-size-fits-all requirmenet. “The sponsors are determined to reinstate mandatory sentences for several offenses, including offenses committed with firearms and for certain drug offenses committed with firearms,” explain Keenan Rambo and Samantha Jallah in a Philadelphia Inquirer op-ed.

Bryan Adams Does Beach Clean-up To 'Make Himself Useful'