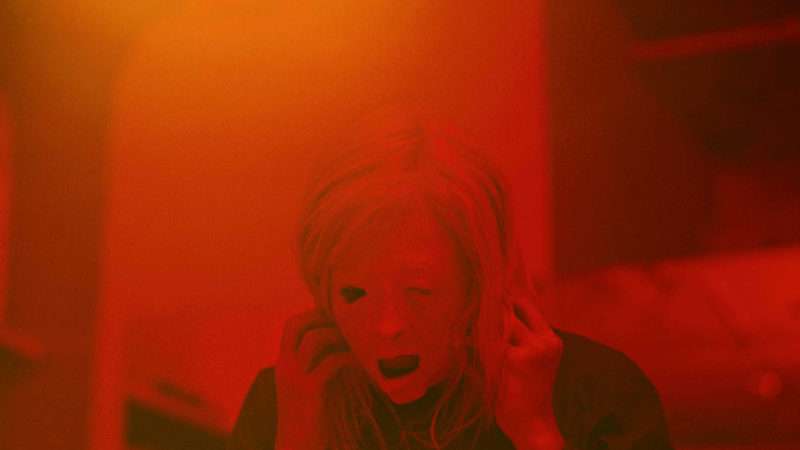 The writer and director, Brandon Cronenberg, is the son of David Cronenberg, past master of icky ideas and disturbing imagery, and Possessor echoes some of the dank gloom of his 1983 Videodrome. But Brandon has creep-out skills of his own, and he’s brought them to bear intensely on this madly complex puzzle-film.

Andrea Riseborough (Nicolas Cage’s doomed girlfriend in Mandy) is Taya Vos, a woman with a husband, a son, and a side job as a brain-burrowing corporate assassin. Her work requires the cranial implantation of a cyber worm that allows her to take over the body of a designated target. For example, her latest assignment, overseen by an agent-handler named Girder (Jennifer Jason Leigh), requires her to meld with the mind of Colin Tate (Christopher Abbot), boyfriend of Ava Parse (Tuppence Middleton), who is the daughter of obnoxious tech mogul John Parse (Sean Bean). Taya’s assassination bureau has been hired by Reid Parse (Christopher Jacot), John’s disgruntled stepson, to murder John and Ava and set up Colin as the killer, clearing the way for Reid to inherit the family fortune. Taya’s part in this operation is to take over the body of Colin, have him kill John and Ava and then kill himself—right after she has signaled headquarters to bring her back to safety. “A clean tragedy,” says Girder. “No unanswered questions.”

The bending of gender and identity in this movie is incessant (and sometimes confusing), and it enables little jokes—like the scene in which Taya, newly installed in Colin’s body, peaks down into his/her pants to assess the unfamiliar appendage she’s just acquired. Generally, though, laughs are scarce here. As Taya’s own mind starts breaking down, she finds herself involved in a shell game of slippery personalities, some of whom prove surprisingly difficult to defeat.

With its gouged-out eyeballs, fiercely pulped faces and whatnot (the fingers of a severed hand go on wriggling as if in farewell to its departing owner), Possessor could pass for a straight gore movie. The grisly stuff isn’t entirely new, maybe, but the director holds on it at unnerving length. (One scene, in which a character gets his face beaten in with a poker, might leave you feeling as if you’d been worked over with a fireplace implement yourself.)

What lifts the picture above its unstinting mayhem are the actors: Riseborough creates a harrowing portrait of a woman crumbling into existential confusion, and Leigh’s character is amusingly blasé about the gruesome particulars of her job. Also key are the intoxicating cinematography (by Karim Hussein) and production design (by Rupert Lazarus). Director Cronenberg has dispensed with digital effects and creates much of the film’s alarming magic by old-school means—with gels and other lighting strategies. Some of the most hallucinatory scenes are bathed in an arterial haze, while others play out in moody shadow.

You might not expect a movie that begins with a shot of a woman driving a needle into her head to find many directions for development. But Possessor‘s horrific conclusion sets a new standard for both cinematic savagery and slick sci-fi screenwriting. As Taya’s brain-jarring implants start to affect her marriage, she has to wonder: “Are you really married to the man, or are you married to the worm?”