For some time, I have predicted that Chief Justice John Marshall would be cancelled. I wrote about this issue in 2016, long before I even knew what cancellation was. More recently, two law schools named after Marshall have appointed commissions to revisit the name: University of Illinois at Chicago John Marshall Law School and the Cleveland-Marshall College of Law. Two other law schools with Marshall’s name have not taken any steps–yet: Atlanta’s John Marshall Law School and the College of William & Mary Marshall-Wythe School of Law.

The National Law Journal has now picked up on my theme, with a piece titled, “Should Law Schools ‘Cancel’ SCOTUS Titan John Marshall?“ 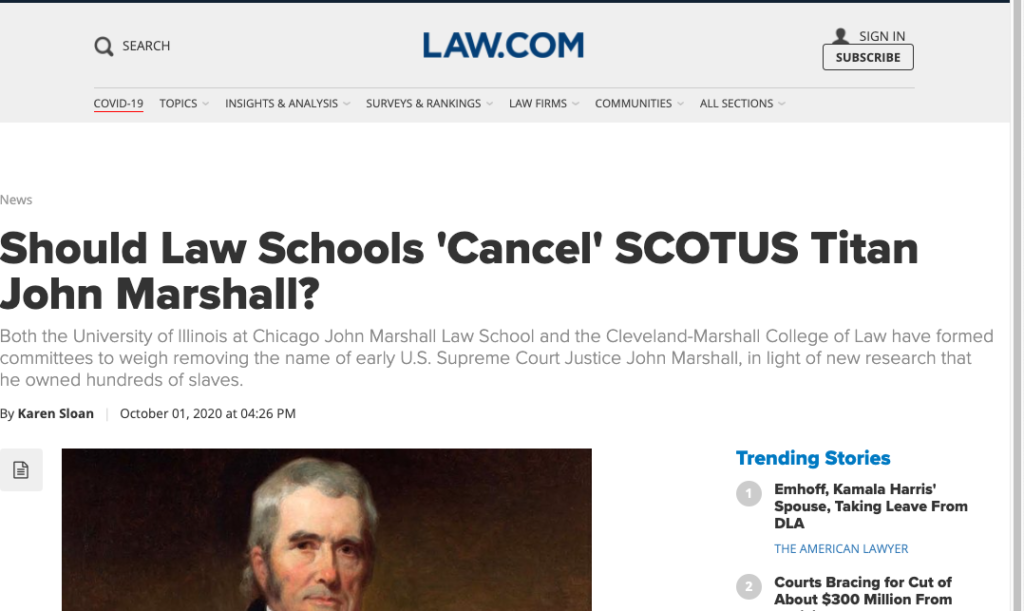 Not everyone agrees that Marshall should be sent packing, however. Josh Blackman, a law professor at the South Texas College of Law-Houston and a constitutional law expert, has for years predicted that Marshall would come under scrutiny for his opinion in Johnson v. M’Intosh, as well as the recent revelation of his vast slave holdings. But Marshall established the foundation of the American legal system and deserves to have law schools named for him, Blackman said this week.

Paul Finkelman takes the opposite perspective:

Before any institution decides to part ways with the Marshall name, Finkelman recommends they have a large, public dialogue about the man—both his contributions to the court and the actions he took outside its walls. These renaming conversations are an opportunity to educate the public about the past and how slavery influenced American law, jurisprudence, and politics, he said.

“He’s the most important Supreme Court justice, certainly of the first 100 years of the United States,” Finkelman said. “Of the 10 Supreme Court cases most cited by the Supreme Court itself, five of them are Marshall opinions. He is a giant in the history of the Supreme Court. I don’t take that away from him. But he is Lilliputian when it comes to human rights and human dignity, race and slavery.”

SF Author & Futurist David Brin + 4 Law Profs on the Future of the Internet and Micropayments – Reason.com