George Floyd’s death under the knee of then–Minneapolis Police Officer Derek Chauvin unleashed the activism that prompted the Minneapolis City Council to vote in June to completely eliminate the police department and attempt to craft a more “holistic” approach to handling public safety.

That’s not happening. It turns out that actually shifting policies takes more than embracing an expansive but vague concept of change.

The Minneapolis City Council knew this in June: The council’s vote didn’t actually order the disbanding or defunding of police. Instead it launched a lengthy process to change the city’s charter with the aim of ultimately replacing the police department with a “Community Safety & Violence Prevention Department.”

What does that actually mean? Well, that’s part of the problem. The proposed changes to the city’s charter cross out the section on the police and add sections for this new department. Here how the proposal describes the department and the person tapped to lead it:

Director of Community Safety and Violence Prevention Department. The Mayor nominates and the City Council appoints a director of the department of community safety and violence prevention under section 8.4(b). Individuals eligible to be appointed as director will have non-law enforcement experience in community safety services, including but not limited to public health and/or restorative justice approaches.

But what does that mean? The next two parts of the proposal essentially restore the idea of having a police department, but just call it the “Division of Law Enforcement Services.”

This vagueness, The New York Times reports, ended up being a significant problem. As has become increasingly clear since that vote, there is no real agreement on what this new vision of policing should look like; much of the public—including, in one poll, 50 percent of black residents—”opposed reducing the size of the police department.” Meanwhile, councilors “repeatedly heard criticism from business owners and residents in more affluent areas of their wards who feared for their safety, as misinformation spread that the end of the police department was imminent.”

It turned out the City Council did not even have the authority to disband the police. Minneapolis is a charter city, and changes to its charter need to be reviewed by a state-appointed charter commission full of volunteers. The commission members are supposed to consider any legal or technical problems with a proposed charter change before putting it before voters. They decided that the proposal had not been written with proper legal provisions or with enough public input, and they declined to forward the City Council’s amendment by a vote of 5–10, instead calling for further study. The public will not be voting on it this November.

What has happened instead are some simple, but valuable, incremental reforms. Notably, while there’s been barely any “defunding” of the Minneapolis Police Department at all, $1.1 million was shifted from the police to the health department for more resources to try to help mediate conflicts.

The other major “accomplishment” of this vote has been to launch a new front of culture wars across the country where those with substantive policy proposals to reduce overpolicing have been drowned out by rioters on one side and aggressive police supporters on the other. President Donald Trump now campaigns by misrepresenting urban environments as lawless zones of anarchy, and the Department of Justice is attempting to cut grants to cities that cut spending to the police departments. 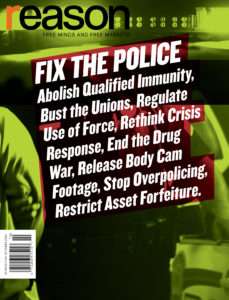 The best way to reduce police spending is to take the time to reform the ordinances, policies, and practices that cause police departments to expand and that protect officers from accountability for misconduct. Reason‘s October issue about fixing the police offers a host of substantive, specific changes that will lead to less policing (by ending the drug war, for example) and more accountability for police conduct (by abolishing qualified immunity and busting the police unions). Check out how to reform policing without relying on vague utopian sloganeering here.