Federal Payments to Farmers Have Tripled Since 2017, and Trump Just Promised Even More – Reason.com


It was March 2, 2018, when President Donald Trump’s top trade adviser appeared on Fox Business Network to reassure Americans that other countries wouldn’t retaliate against new tariffs proposed by the White House.

Those tariffs on imported steel and aluminum were the first major battle in what’s become an expensive and largely unsuccessful 2 1/2 year-long trade war. But even at that early stage, it was obvious to some observers that the trade war wouldn’t be as easy or beneficial as the Trump administration was promising. “Should we expect China and others to come back and say, ‘Oh really America? Well take this, I’m going to raise tariffs and retaliate on farm goods,” Fox Business’ Maria Bartiromo directly asked Peter Navarro, director of the White House Office of Trade and Manufacturing Policy, during that March 2 interview.

“I don’t believe any country is going to retaliate for the simple reason that we are the most lucrative and biggest market in the world,” Navarro told her.

Well, he was wrong. Retaliation from several countries, but especially from China, caused exports of American agricultural goods to plummet in the years that followed. In 2017, the last year before the trade war began, China imported more than $19 billion in American farm goods, which fell to $9 billion in 2018 and rebounded weakly to $13 billion in 2019. Exports to other countries have been unable to make up the difference and, as a result, overall agricultural exports have fallen since the trade war began—ironically, given Trump’s focus on trade deficits, that means America now has a smaller farm goods trade surplus than at any time since 2006.

But to fix one self-inflicted wound, the Trump administration made another. Starting in 2018 and ramping up last year, the White House began making billions of dollars of direct payments to farmers who had been economically injured by the trade war. The Trump farm bailouts are on pace to cost taxpayers more than $37 billion this year—a huge increase over the total cost of direct farm payments, as tracked by the U.S. Department of Agriculture, in pre-trade war times. 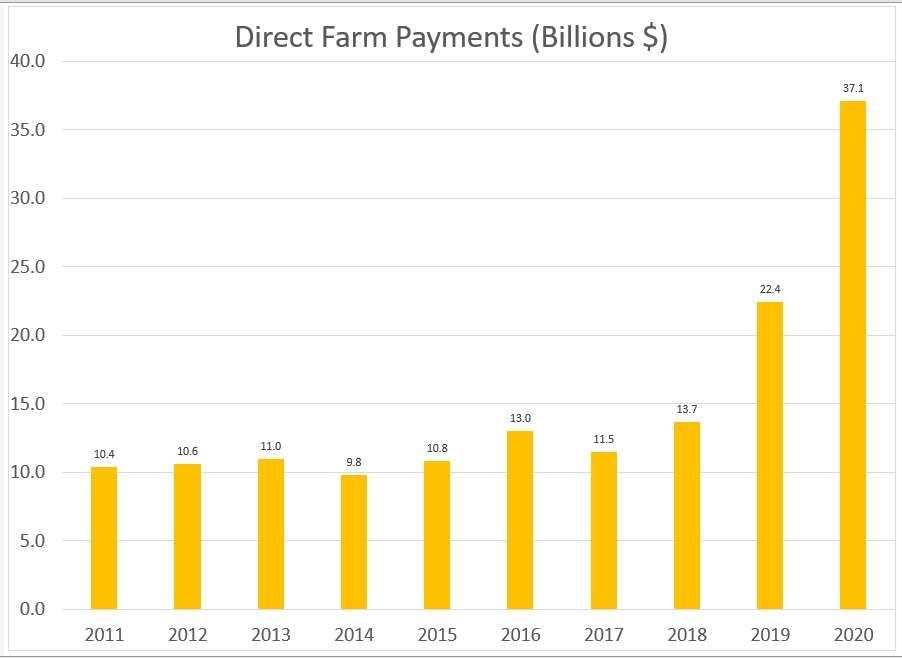 The farm bailout has already cost taxpayers more than $28 billion—a total that doesn’t include $14 billion in spending announced this week by the U.S. Department of Agriculture (USDA)—all without a single dollar being approved by Congress. Instead, the White House has activated a long-dormant Depression-era program to borrow the funds directly from the Treasury.

The whole thing is exactly the sort of unaccountable executive overreach that Republicans used to campaign against. Now, Trump is using those bailouts as part of his reelection pitch, effectively telling voters in farm-heavy states that the money will keep flowing as long as they keep him in office.

“I am doing even more to support Wisconsin farmers,” Trump said during a rally in Wisconsin on Friday. “Starting next week, my administration is committing an additional—you have been asking for this for a long time—$13 billion in relief to help farmers recover from the China virus, including Wisconsin’s incredible dairy, cranberry and ginseng farmers who got hurt badly.”

Blaming the coronavirus pandemic is a clever bit of campaign-trail rhetoric, but it’s clear that American farmers were hurting long before the world knew about COVID-19. Wisconsin dairy farmers have been hit particularly hard recently—the state saw roughly 10 percent of its dairy farms close in 2019, before coronavirus hit—and the state is, of course, a key battleground in the upcoming presidential election.

If the farm bailouts were an exception, maybe Republicans could be forgiven for looking the other way. But Trump has expanded the cost of government on almost every front during the past four years. For a guy running against the supposed socialism of the political left, Trump sure has embraced a lot of socialism on his own when it has been politically advantageous to do so.

But even if Trump is defeated and the trade war comes to an end, taxpayers may end up footing a larger bill for farm subsidies for years. There’s nothing as permanent as a temporary government program, after all.

“It’s hard rolling back these things,” Joseph Glauber, a senior fellow at the International Food Policy Research Institute and former USDA chief economist told Politico in July. “The headlines are going to scream when [USDA] puts out a February 2021 farm income forecast that doesn’t show any ad hoc payments.”