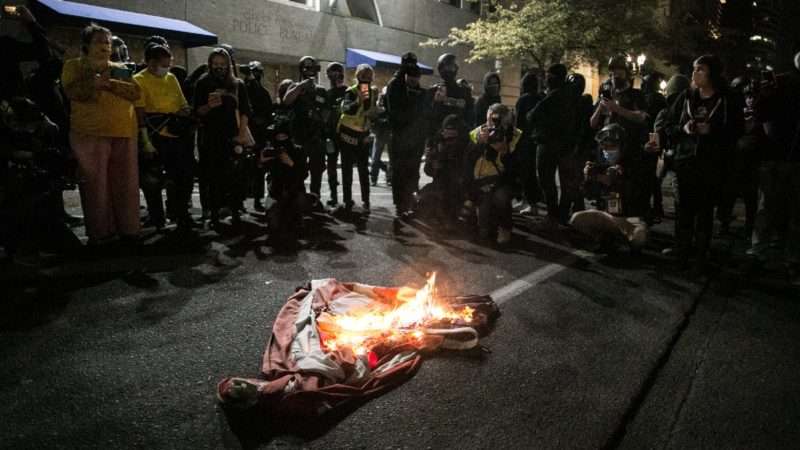 This past weekend, President Donald Trump asked Attorney General William Barr to designate Seattle, Portland, and New York City as “anarchistic jurisdictions” and to consider withholding federal funds, including potentially those used for law enforcement, from those cities.

Of the three cities, Portland has had the longest running visible conflicts, with marches and escalating violence nearly every night since George Floyd was killed on May 25. (Protesters did take a few nights off during the recent wildfires.)

The pictures the world sees of Portland are unsubtle—it’s either “Savages coming to your town!” or “Protesters clubbed by Trump goons!”—and the situation on the ground, remains seemingly intractable. Mayor Ted Wheeler is in constant tension with his police force, with demonstrators in Portland (including those who effectively forced him to move out of his condominium), and with the person vying for his seat in five weeks, the openly pro-antifa candidate Sarah Iannarone.

What impact, if any, might the designation have—and is it in earnest?

“My take on this ‘anarchistic jurisdiction’ nonsense is that it’s just some more cheap oratory to keep his peeps raging, hating, and on the edge of violence,” says civil rights lawyer Michael Rose of Trump’s latest gambit to impose law and order.

D. Angus Lee disagrees. The criminal attorney sees a police force that’s been steadily winnowed, both by new District Attorney Mike Schmidt’s decision not to prosecute protesters for many previously prosecutable crimes, and by city officials scrapping programs that, in Lee’s view, kept the community safe.

“Mayor Wheeler should immediately bring back the Gun Violence Reduction Team,” he said.

The two attorneys come from different perspectives. Rose was marching for civil rights in the 1960s; Lee is a former Marine born in 1977. Rose currently has a case in federal court over “cops [who] pepper-sprayed our client for no good reason”; Lee wonders why his client, Patriot Prayer founder Joey Gibson, has not had his rioting charge retroactively dropped when so many others, under Schmidt’s new rules, have.

The two attorneys—Rose is based in Portland, Lee in nearby Vancouver, Washington—offered to share some thoughts with Reason.

Do you see this latest move by Trump and Barr as justified?

Lee: Federal tax dollars are allocated by way of grants to local law enforcement agencies that need—and will actually put to use—grant funding in an effort to enhance public safety. If a local jurisdiction has lost the political will to uphold the law then there is no point giving grant funds to that jurisdiction when those funds could be better used in a jurisdiction where the prosecutor was actually committed to public safety and rule of law. If the funds are being wasted [in Portland], they should be allocated to a jurisdiction that will put them to good use.

Rose: I find Trump’s characterization of Portland as an “anarchistic jurisdiction” laughable, first because he hasn’t a clue as to what the words mean, and secondly, if he did know what they meant, he’d be wrong about the characterization. What needs to be kept in mind is that the “anarchistic” property damage is, by all reports, being done by a fairly small cadre of young white protesters, only opportunistically connected with Black Lives Matter and the underlying purpose of the ongoing demonstrations.

Even so, they create a problem for management—namely Mayor Wheeler—because, well, blowing stuff up and smashing windows and flames catch a lot of attention and opprobrium. Since they’re dramatically visible, something appears to be needed to deal with them. Something, Trump prefers, loud and violent. To be fair, Wheeler’s been in a tough spot. On the one hand, in relatively progressive Portland, his constituency is comprised largely of people who are critical of the police and supportive of Black Lives Matter; they don’t want to see the cops being encouraged to ever-escalating round[s] of violent discourse. On the other, the police are, well, they’re the police, and a mayor can’t come down too hard on the police union.

Do you think the designation will be followed through on?

Lee: I have served as an elected county prosecutor and have been involved in the federal grant process. Denial of grant funding will happen unless these jurisdictions start to uphold the law. All federal law enforcement grants are reviewed annually. The receiving jurisdiction needs to show evidence each year that the grant funds are being put to good use. Currently, Portland-area law enforcement can’t make a good-faith claim to be interested in community safety so they will lose the grant funding eventually.

Rose: I have no idea if [Trump] could unilaterally and whimsically adjust the flow of already-allocated funds by executive order, but I have no doubt that Barr will try to come up with some kind of seriously half-baked justification. If I were I to bet a quarter on it, I’d bet it doesn’t go anywhere.

Have local/state officials acted in the interest of citizens? If so, how did we get to 100-plus days of escalating tensions?

Rose: The interests of the residents of Portland would be best served by reining in the cops and making them subject to meaningful civilian, rather than internal paramilitary, control. That’s not easy, because of the aforementioned [union]. Nonetheless, I think the interest of the people of this city would be well-served by working toward a humane (and non-racist) but effective police force, and it appears that we have neither. If there is a reason that there is still tension after 100-plus days of protest it is largely because the city hasn’t really done a damn thing to address the issue that’s being protested.

What of D.A. Schmidt’s decision to not prosecute protesters accused of protest-related crimes, such as disorderly conduct and rioting?

Lee: Schmidt’s policy is both bad for the community and likely illegal. A prosecutor simply does not have the authority to usurp the role of the legislature and decide that certain activity is no longer criminal and will not be prosecuted when engaged in by those who share Schmidt’s political views. Under his policy, he has listed several state crimes that will not be prosecuted. But Oregon state law (ORS 8.665) makes very clear that, “Upon the issuance of a citation by any person authorized to issue citations for violations, a district attorney shall prosecute the case if it appears that a violation has occurred.” The use of the word  “shall” indicates a mandatory obligation.

Rose: Having represented countless protesters over the last 45 years, people get prosecuted for the chippiest stuff, and each arrest radicalizes one more person and is a potential cause for aggravation for the city. It got to the point, under our two previous DAs, that protesters were arrested on criminal charges which wound up being reduced to violations less serious than a rolling right turn. The whole arrest/prosecution process became nothing more than a way to break up demonstrations with some heavy-handed crowd control. The bulk of the protesters who were charged were charged with such things as disobeying a police officer and disorderly conduct and, realistically, many of those charges were simply made up after the fact to justify the police action to clear the street. Most of these were not people who needed to be arrested and prosecuted under the criminal law. Schmidt has done nothing more than recognize this. Good for him.

I am of the opinion that many of the young demonstrators are living in a post-political world and don’t give a fig about [Democratic presidential contender Joe] Biden or Trump, though the latter gets them riled. Will being designated an anarchistic jurisdiction city deflate them or put more gas in their tanks?

Lee: The designation will have next-to-no long-term impact on the children running wild in the streets of Portland. At this point, what is going on in Portland has absolutely nothing to do with justice, equality, or civil rights. Nothing. It’s just a power trip, and they just want to see how far the mayor and prosecutor will let them go.

Rose: For those who are actively engaged in the conduct the designation is directed at, I’d guess to the extent that they care what designation they get, they will respond to it in the spirit of Al Jolson: “You ain’t heard nothin’ yet…”

What steps need to be taken to incur some calm in the city—or is Portland past that outcome?

Lee: Restoring order would be easy, but Wheeler lacks the political will needed to stop the insanity. The sad thing for all of Portland is the people are ready for the mayor to put a stop to this but he’s afraid it will hurt him in the election. He is putting his campaign ahead of the safety of the good people of Portland.

Rose: When the rains of winter are upon us, the streets will calm down. Or, the city can actually start addressing the problem of excessive force being directed excessively against people of color.

Lee: The only thing everyone in the Portland area can agree on is that Wheeler is a failed mayor. When the mayor has proven he can’t lead, it’s time for Option B. In this case, Sarah Iannarone has something very appealing about her as a candidate in this race: She’s not Ted Wheeler.

These interviews have been edited for style and clarity.