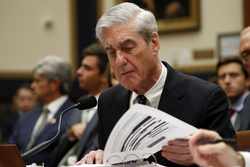 Once upon a time in America, 18 1/2 minutes of missing tape was a big deal to the Democratic establishment — including famed left-wing journalists like Bob Woodward — during Watergate.

Yet, today, the D.C. media echo chamber and FBI Director Christopher Wray are conspicuously silent about the latest bombshell report from Judicial Watch that over two dozen cellphones used by Bob Mueller’s special counsel during its “Russia collusion” investigation were wiped clean — or destroyed. Curiously, this went down before the Justice Department’s Office of the Inspector General requested the devices when beginning its own investigation into the origins of the Russia investigation and special counsel’s activities that illegitimately targeted President Trump and his associates based on a discredited dossier paid for by the DNC and Hillary Clinton’s 2016 campaign. All of which found no evidence of collusion.

This political witch hunt cost taxpayers a whopping $32 million and ended with a whimper.

Now, despite these Justice Department documents revealing the missing communications and wiped cellphones amongst top officials at the FBI and special counsel, the establishment media is silent. Why is that? Is it because the media were complicit in the “Russia collusion” hoax from the start by disseminating and amplifying the now-debunked conspiracy theory?

That said, you don’t need a fancy law degree to know it’s a crime to destroy evidence. So is obstruction of justice and the failure to preserve government records and communications. Will the FBI and Department of Justice address these shocking developments? There is no way that the data on government-issued phones was mistakingly or “accidentally” destroyed.

According to the DOJ documents, Mueller deputy Andrew Weissmann “https://www.realclearpolitics.com/”accidentally wiped’ his phone twice after entering the wrong passcode too many times in March 2018,” reports Fox News. “Lawyer James Quarles’ phone ‘wiped itself’ without his intervention, the records say.”

Many others directly involved in the special counsel investigation and related Crossfire Hurricane communications have also gone missing. Lisa Page’s and Peter Strzok’s phones were wiped clean, back to factory settings.

What are they hiding?

That’s the question Wray, Attorney General Bill Barr and Congress ought to be asking right now while the American people contact their local representatives and demand answers.

In a just society, we cannot have a two-tiered justice system where the law is applied unequally. As such, an investigation must ensue without delay.