Why the Trump Campaign Has Biden On the Ropes 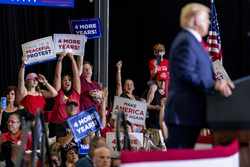 If spending on political advertising corresponded with votes, the 2020 presidential campaign would already be over. Joe Biden would win in a landslide. In one of the more surprising developments of the race, the once cash-rich Trump campaign has been trimming its ad buys in some critical swing states, alarming some Republican supporters. Team Biden, meanwhile, is pouring more resources into television and social media buys as he tries to expand his small leads in key states. According to the firm Advertising Analytics, in Pennsylvania alone in the five weeks preceding Labor Day, Biden outspent Trump on the airwaves $15 million to zero.

END_OF_DOCUMENT_TOKEN_TO_BE_REPLACED

Hurricane Sally slams into Alabama and Florida, and rescues from widespread flooding are underway