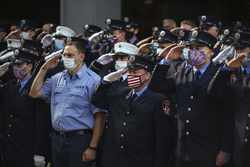 My uncle Mark joined the New York City Fire Department when he was 28 years old. My grandfather, ‘Pop,’ had worked as a fireman in the city too, and Mark wanted to continue his legacy. But after only four years on the job, Mark would find himself in the middle of a tragedy: He would witness the events of September 11, 2001, firsthand. That day and the ensuing weeks were mostly a blur, he says now, but he remembers the “big picture” vividly.

END_OF_DOCUMENT_TOKEN_TO_BE_REPLACED

Podcast on “A Man for All Seasons” – Reason.com