The Fight To Control Who Reports From Portland – Reason.com


“YOU’RE NOT ALLOWED TO FILM!” is a cry you hear incessantly at protests in Portland, Oregon, always shouted at close range to your face by after-dark demonstrators. You can assert that, yes, you can film; you can point out that they themselves are filming incessantly; you can push their hands away from covering your phone; you can have your phone record them stealing your phone—all of these things have happened to me—and none will have any impact on their contention that “YOU’RE NOT ALLOWED TO FILM” and its occasional variation, “PHOTOGRAPHY EQUALS DEATH!”

I cannot say who came up with these anti-camera battle cries. But it’s easy to understand why protesters use them: to shape the narrative the country sees about the protests. And that narrative, in my estimation after many weeks covering street clashes in a city where I lived for 15 years, is 90 percent bullshit.

I wondered, the first time I attended the protests at the federal building back in July, who all these young people with PRESS emblazoned on their jackets or helmets were. I asked one such guy who he worked for.

“Independent Press Corps,” he told me. As it turned out, dozens of other young PRESS people happened to work for the same outfit, which I at first assumed was a fancy way of saying “I want to report stuff and stream it on my Instagram.”

This turned out to be naive. The IPC is an organized group in league with the activists, and it is usually their footage you see streamed online and recycled on the news: mostly innocent protestors being harassed and beaten by police.

The police indeed have tear-gassed and beaten people; there has been brutality. It is equally true, but featured less prominently in the news coverage, that activists spend hours every night menacing and setting fires to police stations and other institutions: City Hall, Immigration and Customs Enforcement headquarters, and last week Mayor Ted Wheeler’s apartment building (until he agreed to move out). With the PRESS crew recording part of the story and the “YOU’RE NOT ALLOWED TO FILM!” crew harassing other journalists, the result can be a misleading view of the protests. It’s a revolution via the cellphone video they allow you to see.

The IPC and other documentarians who are deemed sympathetic to the activists’ cause agree on certain principles. You do not show activists’ faces. You only show activists in a defensive position: responding to, rather than inciting, violence. You enhance what can appear to be police brutality, e.g., activists defending themselves with homemade shields, often bearing the anarchist circle-A, against police. The shields are largely ineffective for personal defense, but extremely effective for optics, and that’s precisely the point. If a member of the IPC is arrested, he or she will be protected.

Reporters seen as not sufficiently sympathetic to the cause—which is defined by the Ten Demands for Justice, and includes most notably the abolition of the police—will be followed, be harassed, have their notes photographed and their phones blocked or stolen. (All these things have happened to me in the last month. A photographer friend has been repeatedly doxxed and placed on a list of “enemies.”)

If you forget any of these rules, you can just refer to the handy Google spreadsheet of approved journalists and suggested behavior. The spreadsheet contains names, Twitter handles, and ways to financially support the journos who make the cut.

Note who the people on this activist-approved list are writing for. Sergio Olmos, who made IPC’s list of approved journalists, is a man on the ground for The New York Times. Freelancer Robert Evans, whose early tick-tock of events on the ground I have admired, tweeted on July 19 that the burning of the Portland Police Association was “the single biggest win so far.” When questioned why, he replied that protesters have been “tear-gassed and beaten” for weeks. Unmentioned in our conversation or his tweets: Protesters have been setting fire to the building for hours on many nights throughout the summer before a police response materializes. 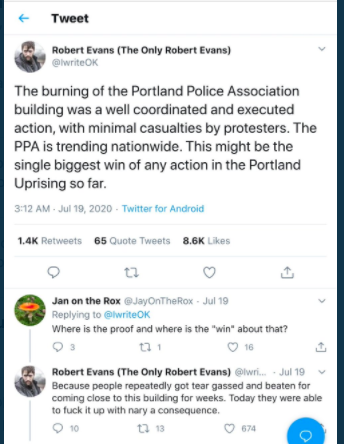 These protester-approved journalists are producing much of the news you see about the protests, with an assist from the national press. Kate Shepherd isn’t on the list, but she was previously a sympathetic reporter for local Portland media, and she is now filing such stories for The Washington Post, with headlines like “Portland police arrest a hate crime survivor and Wall of Moms organizer in crackdown.”

Meanwhile, Portland has become a political football, with Donald Trump essentially running his presidential campaign against Democratic mayors like Wheeler, tweeting that “Portland will never recover with a fool for a Mayor. He tried mixing with the Agitators and Anarchists and they mocked him. He would like to blame me and the Federal Government for going in, but he hasn’t seen anything yet. We have only been there with a small group to defend our U.S. Courthouse, because he couldn’t do it.” Both sides are getting their information through purposely bottlenecked media reports, and the results are predictably distorted and dangerous.

It will not be quiet in Portland this weekend. Last night self-professed antifa supporter Michael Reinoehl was shot to death as the authorities tried to arrest him for killing Patriot Prayer member Aaron Danielson. (Reinoehl claimed in an interview with Vice that it was self-defense.) It’s going to be 100 degrees in the city. As we move into what is shaping to be the hottest weekend thus far in Portland, it’s important to understand how the coverage you are getting is being shaped, and by whom.