The Guns of November | RealClearPolitics 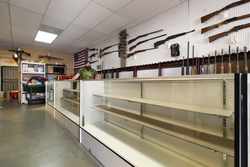 A veteran GOP political strategist told me he likens the current state of America to pressure building inside a volcano and predicts, “It will blow its top immediately after the election.”

Living in Florida, perhaps I watch too much of The Weather Channel, but my own election natural disaster analogy resembles the tracking of a monster hurricane as it moves closer to the U.S. mainland. Based on present conditions, we know at least a Category 3 will strike late on Nov. 3 and gather strength on Nov. 4 or 5. Virtually everyone is aware of the potential for devastation, and millions are taking pro-active precautions — buying guns and ammunition.

Last month, Fox Business reported, “Gun sales surged 135% year-over-year in July to about 2 million and have already matched all of last year, according to a report released earlier this week by research consultancy Small Arms Analytics and Forecasting. Sales were up 145% in June, 80% in May and 71% in April.”

A Brookings Institute report based on data from the National Instant Criminal Background Check System found, “In just the first six months of 2020, approximately 19 million firearms have been sold, representing more than one firearm for every 20 Americans.”

Notably, gun sales dramatically rose in response to the George Floyd protests, resulting in 150,000 per day on June 2 and 3. August gun sales, to be reported in about a week, are projected to set another record — contributing to surpassing the total 2019 U.S. gun sales in only eight months. Women are part of this national gun buying spree, comprising 40% of first-time owners, according to NSSF, the trade association for the firearms industry.

More detailed information about female owners can be found in a recent survey by A Girl & a Gun Women’s Shooting League. A fast-growing national organization with 138 chapters, AG & AG promotes gun ownership, safety, training and “encouragement,” while redefining “girls night out” with shooting range social events. What about “suburban women” — that highly sought-after voting group? Some will be “packing heat” on Election Day, just as they do every day in their attractive “carry purses.”

All this gun-buying data reminds me of a song lyric — “Paranoia strikes deep/ into your life it will creep” — from 1967’s “For What It’s Worth.” This protest anthem by Buffalo Springfield was recently resurrected during the Democratic National Convention, but performed with a modern twist.

Americans have become paranoid about Election Day since the daily violence and upheaval we are seeing could be perceived as a warm-up for post-election chaos when either Joe Biden or Donald Trump “wins.” My quotation marks are in anticipation that determining the next president could take days, weeks, or even months — plunging our nation into levels of civil unrest not seen since the Civil War. We can expect various mail-in ballot controversies, along with potentially millions of rejected or fraudulent ballots to trigger something resembling the “Election Lawyers Full-Employment Act” with endless lawsuits at every state and local level.

The critical question is when the winner is ultimately announced, will the losing candidate accept defeat and calm his supporters? Will they listen to him anyway? In the interim, if both sides are claiming victory, chaos could reign. Municipal police departments, as we’ve already seen, are ill-equipped to handle large numbers of violent protesters. And based on explosive gun sales, these mobs might be armed.

With paranoia striking deep, unprecedented small arms sales have caused a nationwide ammunition shortage. In a July NRA report headlined “Manufacturers Struggle to Keep Up With Soaring Ammunition Sales,” a spokesman from Brownells, a weapons and ammo company, said, “Ammunition continues to fly off the shelves.”

The August edition of NRA Shooting Illustrated was headlined, “Ammo Shortage May Last Until 2021” and mentioned Winchester Ammunition experiencing a 17% increase in orders over the last three months.

PRODUCT DEMAND NOTICE: Like many manufacturers in the shooting sports industry, we are experiencing an extremely high demand for our products. We are continuing to manufacture and ship our high quality products on a daily basis. We appreciate the support and thank you for choosing Winchester.

John Fischer, CEO of Winchester parent company Olin, was quoted saying, “We expect this elevated level of demand to continue at least until the end of the year.” And why is ammo demand predicted to remain “elevated”? NRA Shooting Illustrated cited perhaps the understatement of the year:

“A Presidential election in November will have an impact on the prediction.”

Circling back to election weather analogies, the most optimistic forecast is a “political hurricane” goes “out to sea.” Imagine a clear winner is declared late on Nov. 3 or early into the next day. There are peaceful coast-to-coast celebrations for our newly elected or re-elected president, and all is well across the “Armed States of America.”

Conversely, the hurricane could strike as a mild regional tropical storm or, worse case, strengthen to a Category 5. If the latter, our nation could “blow its top,” resulting in disrupted supply chains and nationwide curfews. There might be widespread deployment of the National Guard or the most dreaded scenario — President Trump invokes the Insurrection Act, deploying federal troops and declares martial law.

After seeing that A Girl & a Gun has a chapter near me, it might be time for a “girls night out” at the gun range because November is coming.

A drop in travel helps the planet. But there's a catch