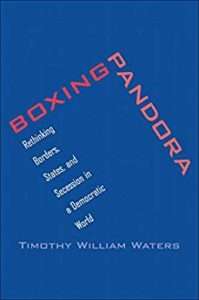 On September 17, from 12 to about 1:30 PM eastern time, the Indiana University Maurer School of Law and the Law and Economics Center at George Mason University are sponsoring an online event on “Crossing Borders, Breaking Borders: New Ideas about Migration, Secession and Political Freedom.” The event will feature presentations by Indiana law Prof. Timothy Waters and myself, on our respective new books on secession and “voting with your feet.” Registration is free and open to the public. In order to watch, you do NOT have to be affiliated with either university in any way.

The event will also feature commentary by Prof. Sanford Levinson of the University of Texas, who is one of the world’s leading experts on secession, democracy, and its relationship to constitutional theory. Indiana University law school Dean Austen Parrish will introduce the speakers and moderate.

For all the expansion of freedom in modern times, most countries’ borders have remained fixed and rigid. And although capital and goods flow relatively freely, human beings’ ability to move between countries or change their citizenship is severely limited. Two new books critically examine these limits, and propose changes. Ilya Somin‘s book Free to Move: Foot Voting, Migration, and Political Freedom (Oxford University Press 2020) argues for wide-ranging expansion of people’s ability to “vote with their feet” both domestically and across international boundaries. Timothy William Waters‘s book Boxing Pandora: Rethinking Borders, States, and Secession in a Democratic World (Yale University Press 2020) argues for a radical rethink of the conventional opposition to secession: Is secession dangerous and destabilizing, or a pathway to stability and greater justice for divided societies? Professor Sanford Levinson will comment on both books.

I previously commented on Tim Waters’ excellent book at the Balkinization symposium devoted to it and F. H. Buckley’s American Secession: The Looming Threat of a National Breakup. In this post, I link to Buckley’s and Tim Waters’ response to the commentators, and offered some brief rejoinders. Sandy Levinson was also a participant in the Balkinization symposium. See his contribution here.

I look forward to the event!