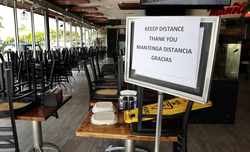 The Baby Boomer generation may count itself the most fortunate in history. After spending their younger years rebelling against their parents, they now expect their grandchildren to sacrifice for them.

The impact of COVID-19 falls neatly along generational lines. It is now fairly clear that – despite some hysterical headlines to the contrary – young people have the least to fear from the virus. According to the Centers for Disease Control, people under 35 account for less than 1% of deaths, and the median age of death is 78. Young people are by no means immune, but no serious expert would deny that their risk level is comparatively low. Their primary risk is not to themselves, but to those around them – including parents and grandparents – who may be more vulnerable.

However, it is young Americans who suffer most directly from our government’s mitigation measures.

It is young Americans, after all, who will be left paying for the $2 trillion CARES Act over the coming decades.

It is young Americans who are graduating into the second catastrophic financial crisis in a dozen years and who, as a result, will likely do worse for the rest of their lives.

It is young Americans, both in the K-12 system and in universities, who are being denied the full benefits of an in-person learning experience, while in many cases being charged full tuition by their schools.

It is also young Americans who are missing out on the full enjoyment of their youth. Closures of venues such as concerts and bars deprive young adults of a whole array of positive life experiences that were permitted to Baby Boomers and other generations. Meanwhile, children and teenagers kept isolated from their friends are denied the sort of free play and socialization that is crucial for healthy development.

Being 26, I have seen directly what people in my age group are going through. Many are depressed, frustrated, and worried for their future. They feel as though they are having their best years stolen from them. Barraged with dispiriting “new normal” rhetoric, many see no light at the end of the tunnel.

I have heard anecdotes of young people who only a few months ago were living independently, with burgeoning careers and happy social and romantic lives, but are now back with their parents, unemployed, lonely, and miserable. Some have fallen back into old vices, spend their days sleeping and are showing signs of premature aging.

Indeed, a recent CDC study found that more than a quarter of young adults aged 18 to 24 have contemplated suicide in the past month.

Young people have not failed. We have been failed. And it is the older generation that has failed us with their policies.

The Baby Boomers would not have taken this sort of thing lying down. They would have staged sit-ins at the offices of university presidents, demanding that schools either open for in-person learning or refund their tuition. They would have held “social un-distancing” events. They would have burned masks.

Disappointingly, though, young people have done none of these things. Never has a generation with such good cause to rebel had such little inclination to do so.

There is some youth activism these days – most prominently March for Our Lives and the School Strike for Climate, which framed gun control and climate change as generational issues. And yet Greta Thunberg has not yet spoken up for the 25% of her peers who are contemplating suicide. As for David Hogg, he is busy tweeting admonitions to “Wear a mask.”

All told, it represents a startling dereliction of duty by these young leaders to give voice to a real problem afflicting their generation.

To those youngsters who are despairing as a result of this unjust lockdown, I can only urge you to use your voice to change things. It is time to give the gerontocracy a taste of the same disobedience they showed their own parents. The needs and interests of young Americans should not necessarily supersede those of the elderly, but they should certainly be included in discussions in a way they are not being included currently. We deserve better than patronizing lectures on social responsibility. We deserve our lives, freedom, and future back.

Jason Garshfield is a freelance writer.

Both Biden and Trump Plan to Spend Well Beyond the Government’s Means – Reason.com