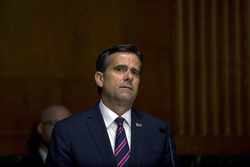 It’s no secret that President Trump has spent nearly his entire time in office at war with his own intelligence community after discovering unprecedented government surveillance of some of his campaign’s advisers.

Joe Biden and his team have countered Trump’s skepticism by repeatedly castigating the president for dismissing intelligence community warnings as politically motivated. One of the condemnations from the Democratic presidential nominee came in late July after Trump said he hadn’t received a personal intelligence briefing on reported Russian efforts to pay the Taliban bounties for killing American troops in Afghanistan.

“The idea that somehow he didn’t know or isn’t being briefed, it is a dereliction of duty if that is the case,” Biden said, throwing in one of Trump’s criticisms of him to underscore his argument: “He doesn’t seem to be cognitively aware of what’s going on.”

Now that the president has John Ratcliffe, a trusted loyalist, installed as director of national intelligence, the shoe is on the other foot for team Biden. The former vice president is now discounting major aspects of official intelligence assessments – especially as they pertain negatively to his campaign.

He’s also getting help from the media. Politico on Tuesday published a story aimed at undermining the most recent intelligence report regarding China’s efforts to influence the November election, quoting “officials who have seen the underlying intel.”

There’s no disputing, however, that in early August, the U.S. intelligence community’s top election security official concluded that America’s greatest adversaries, Russia and China, are on opposite sides of the 2020 election, with Moscow favoring a Trump win and Beijing hoping for his loss. As National Public Radio’s headline bluntly put it: “U.S. Intelligence: China Opposes Trump Reelection; Russia Works Against Biden.”

William Evanina, who heads the National Counterintelligence and Security Center, is quoted as saying that U.S. intelligence agencies have determined that China wants Trump to lose because Beijing is unsettled about where it stands with him and considers him “unpredictable.” Meanwhile, Russia is working to promote Trump and undermine Biden in the final two months of the election, Evanina said.

The Biden campaign only accepts half of those findings – that Russia is working to promote a Trump victory. Late last week, it issued a press release asserting that Trump is “the weakest president in U.S. history when it comes to China” and that “Chinese officials are pulling for [Trump’s] re-election.”

How can Biden’s campaign square that with the official intelligence report claiming the opposite? It doesn’t really try. And outside Democratic national security experts suggest the reasons run deeper: They argue Ratcliffe isn’t running the official assessments about election interference in an above-board way.

Contacted by RealClearPolitics, the Biden campaign officials cited a litany of reasons why Trump is weak on China, including his early statements downplaying the coronavirus threat “to justify inaction, disregarding warnings from the intelligence community and Joe Biden not to take their word.”

“As a consequence of Donald Trump’s failures, by every metric, China’s position is stronger and ours is diminished,” campaign spokesman Andrew Bates told RCP. “He has hurt our alliances, left a vacuum in the world for China to fill, offered support for concentration camps, prostrated himself to ask for a reelection bailout, and leveled the strong economy we left him.

“That is precisely why numerous Chinese officials are openly pulling for Donald Trump to win, and why the American people absolutely can’t afford that outcome. Joe Biden — who has been tested in the world — will invest in our people and our competitiveness so that we can build back better,” he added.

Ned Price, a former CIA analyst who served as a senior director on the Obama administration’s National Security Council staff and is not involved in the Biden campaign, offered another explanation. In an interview with RCP, Price said the most recent assessment claiming that China wants Biden to win isn’t convincing because it relies on open-source public comments from Chinese officials, not more penetrating intelligence.

The intelligence community conclusion that China prefers Biden is based on concerns over the Trump administration’s criticism of Beijing’s handling of COVID-19 and its efforts to derail China’s aggression in the South China Sea, according to an early August statement from Evanina.

Trump highlighted those findings during the Republican convention last week — without adding that the intelligence also showed Russia continuing to support his campaign.

“Just In: Chinese Sate Media and Leaders of CHINA want Biden to win ‘the U.S. Election,” Trump tweeted on August 26.

“Beijing Biden is so weak on China that the intelligence community recently assessed that the Chinese Communist Party favors Biden,” Donald Trump Jr. said during his convention speech.

Many Democrats are discounting those assertions, Price said, because there are plenty of countervailing public statements from Chinese officials. In a press release issued late last week, the Biden team cited articles arguing that China is warming to a Trump victory, including a July Bloomberg report stating that current and former Chinese officials say the Communist Party leadership wants to see Trump reelected, “fearing that Biden would be able to unify Eastern allies to resist China’s influence.”

With both campaigns squaring off over the issue, Chris Krebs, the Department of Homeland Security’s top cybersecurity official, tried to provide some nonpartisan refereeing over the last two months, arguing that his team had seen “nothing at the directed, focused level of 2016.”

This year’s election, Krebs asserted, will be “the most protected and most secure election in modern history.” Krebs on Tuesday said DHS’s cybersecurity arm has seen no cyberattacks on voter registration databases this year. “My main takeaway: It’s going to be critical over the next few months to maintain our cool and not spin up over every claim,” he tweeted. “The last measure of resilience is the American voter.”

But that hasn’t stopped both sides from getting spun up over the claims of foreign support for each candidate. In arguing that Chinese officials are actually “pulling for” a Trump victory, Team Biden was responding to Trump’s assertions during the GOP convention that Biden is a “gift” to China, citing the former longtime senator’s decades-long support for giving China favored trade status, which Trump has criticized for sending U.S. jobs overseas.

In accepting his party’s nomination last week, Trump emphasized his “tough approach toward China” in terms of trying to ease U.S. trade deficits and blaming Beijing for allowing the coronavirus to escape its borders.

In a press release rebuttal, the Biden camp cited 15 instances in which Trump praised China for its handling of the virus in the early weeks of the pandemic before abruptly reversing course and condemning Beijing once its campaign of disinformation was fully revealed. The Biden campaign also argued that Trump struck a weak trade deal with China that it’s not living up to, along with claims from former Trump’s adviser John Bolton’s book that the president “begged” Chinese leader Xi Jinping to help him win and that Trump encouraged him to force millions of Uyghurs into concentration camps.

The statement also pointed to Trump’s public encouragement that China begin investigating  Biden and his son last fall when the president was facing a House impeachment inquiry over allegations he tried to extort Ukraine into investigating his opponent.

Moreover, Price and others say they simply don’t trust Trump-appointed officials not to sway intelligence reports in Trump’s favor. “There needs to be a healthy skepticism of John Ratcliffe, who sits atop this [intelligence] structure,” Price told RCP earlier this week. “In some ways, this sort of ability of the intelligence community under President Donald Trump to remain unbiased and to continue producing assessments that are informed only by that unvarnished analysis, I think we’ve seen some cautionary tales.”

More simply, Price questioned as highly suspect the most recent intelligence assessment putting China and Russia on the same plane when it comes to potential election interference.

Price also assailed what he called Ratcliffe’s “scant” intelligence experience – the three-term congressman from Texas had served on the House Intelligence Committee for only six months before Trump nominated him to head the ODNI last summer. By comparison, Dan Coats, Ratcliffe’s predecessor, had spent a quarter-century in Congress, including years on the Senate Intelligence Committee, and four years as ambassador to Germany, one of America’s most important foreign security allies.

“What he doesn’t have in national security and intelligence experience, he has made up for in loyalty to President Trump,” Price said. “Over the course of months, he essentially auditioned for the job.”

On Fox News and during congressional hearings, Ratcliffe regularly accused then-Special Counsel Robert Mueller of illegally smearing Trump in his Russian investigation. During the 2016 election, the former federal prosecutor also called for special investigations into Hillary Clinton’s use of a private email server, and during congressional testimony skewered former Attorney General Loretta Lynch for her meeting with Bill Clinton on an Arizona tarmac amid the email scandal.

Price’s dim view of Ratcliffe’s ability to run the agency in an apolitical way reflects sentiments Biden himself expressed over the weekend. Both were reacting in part to Ratcliffe’s announcement late last week that he would no longer provide in-person intelligence briefings to all members of Congress about foreign election interference. Ratcliffe said his decision stems from past selective leaks following the broader briefings, namely Democratic lawmakers’ stressing the threat posed by Russia while discounting intelligence suggesting China supports a Biden victory.

Ratcliffe said he would still meet the statutory obligations to brief Congress by providing written assessments, but he was fed up with the leaks.

Biden reacted by impugning Ratcliffe’s motives, calling the decision “nothing less than a shameless partisan manipulation to protect the personal interests of President Trump” and a “betrayal of the oath sworn to the American people and our Constitution. … President Trump, though his hand-picked DNI – chosen for loyalty, not experience — is attempting to deprive Congress of the information they need to do their part.”

Ratcliffe over the weekend defended his decision. “Within minutes of one of those briefings ending, a number of members of Congress went on a number of different outlets and leaked classified information for political purposes,” he told Fox News’ Maria Bartiromo. “To create a narrative that simply isn’t true – that somehow Russia is a greater national security threat than China.”

Ratcliffe insisted he wasn’t minimizing Russia’s side of the equation.

“They are a serious national security threat, but day in and day out, the threats that we face from China are significantly greater,” he said. “Anyone who says otherwise is just politicizing intelligence for their own narrative.”

No matter who wins in November, the unprecedented distrust of the intelligence community on both sides will no doubt continue long after the last votes are counted. Just how much that harms U.S. national security will be up to the historians to decide, but for now, it’s another example of the fallout over the government’s unprecedented decision to investigate the Trump campaign and continue the spying months after he was inaugurated.

Time May Not Exist Anymore, but Tenet Does, and It’s in Theaters Now – Reason.com