The Real Unemployment Rate is 21%–and Heading Higher


As businesses, agencies and organizations recalibrate to the reality that the V-shaped recovery was nothing but a brief fantasy, 6 million additional jobs lost may be a best-case scenario rather than the worst-case scenario.

It is somewhat less than reassuring that the “official” unemployment rate of around 12% is roughly half of the “real-world” unemployment rate. As always in the wonderful world of statistics, especially politically potent ones, it depends on what you measure, what you don’t measure / act as if it doesn’t exist, and how you measure what you do measure.

Everyone who digs beneath the headline numbers of employment / unemployment soon discovers a number of jarring anomalies in what the media presents as “factual statistics.”

The first is that the Bureau of Labor Statistics (BLS) doesn’t actually count the number of people who are employed / unemployed; they rely on a sampling survey of employers, which is more like an election poll than an actual measurement.

Secondly, they estimate the number of new businesses which are “born” and existing businesses that “die”, and then guesstimate the number of additional employees this real-time churn generates. This birth/death model is notoriously inaccurate, as it ignores little things like pandemics and is often magically revised to create or eliminate hundreds of thousands of presumed jobs.

The BLS reported that the U.S. employed workforce stood at about 152 million in February. With 32 million claiming unemployment, that’s an unemployment rate of 21%. How do we arrive at a 12% unemployment rate? We ignore the 14.3 million contract / gig workers who are currently drawing emergency Federal unemployment via Pandemic Unemployment Assistance (PUA),and the 936,000 in the Pandemic Emergency Unemployment Compensation (PEUC) program.

But even the 21% real-world unemployment rate doesn’t reflect the full unemployment picture: previously full-time workers who have had their hours cut to part-time aren’t counted in unemployment statistics, even though their employment status has changed for the worse.

Then there are the millions of workers who were recalled to work as businesses re-opened whose employment is up in the air as the expected return-to-normal has failed to materialize.

Anecdotally, the number of small business owners who have decided to close in recent weeks appears to be significant, as the hoped-for V-shaped recovery failed to materialize even as states re-opened. This trend could gather momentum as hope decays into realistic assessment and funds borrowed from emergency federal programs (PPP) run out.

The number of employees who will be laid off again as a rising flood of small businesses throw in the towel could quickly become consequential.

As Corporate America’s revenues falter, the only ways to reduce costs are 1) dump leases on commercial space and 2) lay off employees and 3) slash spending to the bone. All of these end up triggering layoffs.

Could the number of unemployed rise to 38 million from 32 million, a 25% rate of unemployment? As businesses, agencies and organizations recalibrate to the reality that the V-shaped recovery was nothing but a brief fantasy, 6 million additional jobs lost may be a best-case scenario rather than a worst-case scenario. 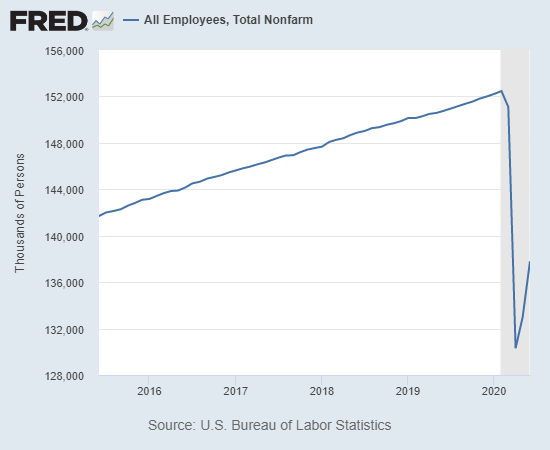 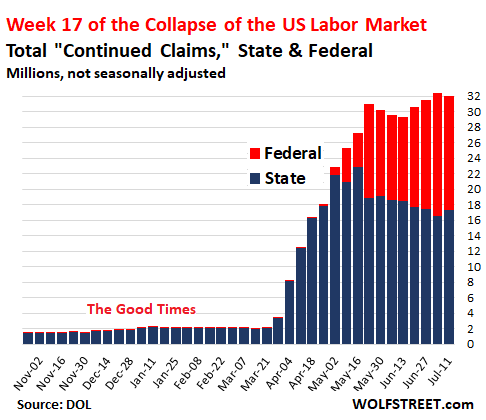