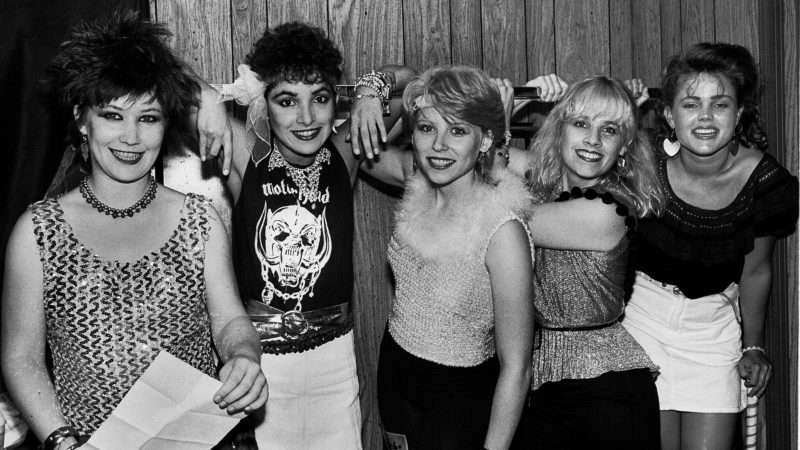 Let us now praise the Go-Go’s, glittering jewels of the New Wave moment of the 1980s .

Praise has been in meager supply since the band’s first album, Beauty and the Beat, streaked up the charts in 1981, fueled by the irresistible hits “We Got the Beat,” “Our Lips Are Sealed,” “How Much More,” and “Skidmarks on My Heart” (all heavily assisted by the newborn MTV). Today, after nearly 40 years of eligibility for induction into the Rock and Roll Hall of Fame, the Go-Go’s remain un-inducted.

In the beginning, there was a certain amount of critical skepticism as to whether the group – chief songwriters Charlotte Caffey (lead guitar and keyboards), Jane Wiedlin (rhythm guitar), and Kathy Valentine (bass), along with singer Belinda Carlisle and drummer Gina Schock—actually played the instruments heard on their records. But they had started out on the tough LA punk scene; and as a terrific new Showtime documentary, The Go-Go’s, irrefutably demonstrates—in period footage from old club gigs and big arena shows—they definitely could play. “We got onstage and happened to be a group of women who really kicked ass,” Schock says.

Some notable fellow musicians were impressed. “They had the most important ingredient in musicianship, which is feel,” says Stewart Copeland, drummer for the Police, which recruited the Go-Go’s as an opening act for a 1981 tour. “They established a groove that worked, that you could lock into. They just created something that exploded on the stage.” A little earlier, the English ska group Madness had the Go-Go’s open for them on a UK tour. “Their musicianship was second to none,” says band member Lee Thompson. “They taught me a thing or two.”

The Go-Go’s’ heyday was brief, for the usual reasons. Despite their sunshiny sound, the group had some dark problems. Carlisle was plagued by decades-long drug and alcohol issues (she recalls the group’s “cross-eyed drunk” performance on Saturday Night Live), Caffey was a full-blown heroin addict, Wiedlin was bipolar, and Schock had a heart condition that eventually required surgery. But in the end it was the music business that tore them apart. Their smash-hit debut album kept them on the road for a year, leaving little time to write new material for their second record, Vacation, which got over mainly on the strength of its title track. Their third LP, Talk Show, featured two classics, “Head Over Heels” and “Turn to You,” but it didn’t crack the Top 10. The magic was leaking away.

But the Go-Go’s’ main problem, which proved insurmountable, was money. Songwriters Caffey, Wiedlin, and Valentine got most of the song-publishing checks, and Schock—a great drummer and the band’s lowest-paid member—grew increasingly resentful. A separate financial injustice propelled Wiedlin out of the group at the end of 1984; Caffey and Carlisle bailed shortly thereafter. And that was it. The Go-Go’s stopped speaking to each other for the next five years. “Money wrecks everything,” Schock says.

There have been several reunions since that time, though, and the best of them—like a 2001 concert in New York’s Central Park, which launched a comeback album called God Bless the Go-Go’s—have shown that the old songs still dazzle, and that the band still has the power and precision to put them over onstage. The Showtime doc—a blend of new interviews and old footage wonderfully well-assembled by director Alison Ellwood—is a rousing tribute to the first self-contained female band (they write, they play) to score a number-one album. God bless ’em.

'The World Is Finally Losing Its Taste For Meat', Says Bloomberg