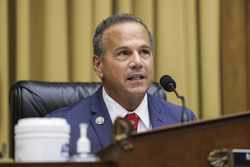 Perry Mason moments don’t occur often, but when they do they are vividly etched in our memory. One occurred Wednesday when the leaders of the nation’s four Big Tech companies were called to testify before the House Judiciary antitrust subcommittee. At the end of the long hearing, one powerful — and unaccountable — sector was exposed for its reckless management of the national dialogue and its imperious treatment and silencing of differing points of view.

That institution, of course, was Congress itself, as represented by the subcommittee.

Lengthy, convoluted questions peppered with innuendo and sinister interpretations of ordinary business transactions were posed to Jeff Bezos of Amazon, Sundar Pichai of Google, Mark Zuckerberg of Facebook and Tim Cook of Apple. The executives’ attempts at answers were often cut off, with some members of the committee interrupting or asking to “reclaim my time,” ending the corporate chiefs’ nuanced approach to complicated, interrogatory smears.

The overall effect was to give each member of the committee an opportunity to post a nice clip — ironically on Facebook, Instagram and Twitter – of him- or herself fearlessly telling off billionaires over Webex. The lack of focus, and unwieldy structure of the hearing process – more than a dozen members questioning four targets – was as unsuited to the purpose of villainizing these companies as it was to illuminating the deeper issues of Big Tech and social media for the public. But the hearing did serve to showcase how poorly members of Congress understand business and how capitalism works.

Subcommittee Chairman David Cicilline asked Pichai: “Did Google ever use it’s surveillance over web traffic to identify competitive threats?” Pichai answered, “Congressman, just like other businesses, we tried to understand trends from, you know, data.”

Jerrold Nadler, chairman of the larger Judiciary Committee, asked Zuckerberg what he meant when he described then-emerging Instagram, later acquired by Facebook, as a “threat.” Was the purpose to “neutralize a potential competitor” or improve Facebook services?

Well, Mr. Chairman, why couldn’t it be both? Perhaps that’s why the FTC cleared Facebook’s acquisition of Instagram. Analyzing market data in order to counter a corporate competitor is not exactly Murder Inc.

It didn’t help the CEOs, however, that internal corporate memos are often full of Mafia-like language, with promises to “take out” the competition. Bezos seemed to blanch when told that he had once urged the company to go after a competitor like a cheetah pursuing a sickly gazelle.

Horrified by all this carnage, Pennsylvania Democrat Mary Gay Scanlon leveled this “blockbuster” assertion: “Amazon hatched a plot to go after Diapers.com and take it out. In an email that I reviewed, and we have these on the slides, one of your top executives proposed to you an ‘aggressive plan to win’ against Diapers.com.”

Bezos replied: “What I remember is that we match competitive prices and I believe we followed Diapers.com,” which Amazon later bought.

Along the way, a few serious charges were aired. How alert is Amazon to counterfeit goods? Did Google threaten to delist Yelp? Do the platforms discriminate politically?

Ranking Republican James Sensenbrenner, now in his last term, was the only member who took the long view. He harked back to AT&T of the “Ma Bell” days. In its heyday, before innovation made it obsolete, he noted that Ma Bell gave consumers a one-stop shop for local service and long distance.

Sensenbrenner then turned to the consumer welfare standard, the governing standard of modern antitrust law. He asked Bezos if consumers would be better off today if a new law forced Amazon customers to go to one vendor for books, another for groceries and another for electronics. “How are the consumers helped by that?” the congressman wanted to know. Bezos replied: “That would not be very clear.”

While other politicians bemoaned the shrinkage of local newspapers and defunct services like Myspace, Sensenbrenner noted that politicians have a lousy track record in picking winners and losers. Zuckerberg had earlier pointed out that of the 10 most valuable companies a decade ago, only three still make that list today.

“Being big is not inherently bad,” Sensenbrenner said. “Quite the opposite. In America, you should be rewarded for success. … I have reached the conclusion that we do not need to change our antitrust laws. They have been working just fine. The question here is the question of enforcement of those antitrust laws.”

Fortunately, there was no lack of comic relief. Two members complained to the CEO of Google about their campaign emails going into their constituents’ spam folders.

Robert H. Bork Jr. is president of the Bork Foundation.