Ugly Protests Are Trump’s Only Hope 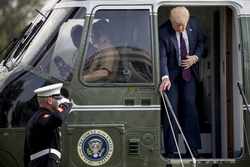 It would take quite a spectacle to upstage America’s humiliating failure to contain the coronavirus. It’s not every day that the Bahamas labels U.S. tourists as carriers of disease to be kept out.

President Donald Trump’s poll numbers continue to sink as cases and death tolls rise. The only thing that could possibly save him is political violence in America’s cities. And that’s what he’s cooking up.

It’s entirely in Trump’s playbook to provoke civic discord. He’s been drawing his detractors into his game for four years. And what better way now than to send armed federal officers in unmarked cars into cities that don’t want them? Unfortunately, protesters in Portland easily rose to the bait. And that chaos set off violent clashes, this time with local police, in Seattle, Omaha and Oakland, California.

“I’m furious that Oakland may have played right into Donald Trump’s twisted campaign strategy,” Oakland Mayor Libby Schaaf said. “Images of a vandalized downtown is exactly what he wants to whip up his base and to potentially justify sending in federal troops that will only incite more unrest.”

Suppose the protesters hadn’t shown up. Suppose they had left the federal agents with empty streets and little to do.

Their causes may be just and their demonstrations overwhelmingly peaceful. But that matters not in these fraught times. Any video snippet of street fighting is guaranteed to get on the evening news.

Meanwhile, some protests have been infiltrated by far-right creeps. In Nevada, for example, the U.S. attorney has charged three members of the “boogaloo” movement — extremists trying to foment a race war — with conspiring to cause destruction during peaceful marches in Las Vegas. They were found to possess Molotov cocktails.

If you were out to help Trump, isn’t that what you would do? Predictably, Trump’s attorney general, William Barr, blamed only left-wingers linked to antifa for the violence. Some may well be part of the poisonous mix. And large protests, especially after nightfall, have provided cover for some old-fashioned criminality.

Trump is already running a “You won’t be safe in Joe Biden’s America” campaign. Of course, it features video of fights with police in fiery clouds of tear gas. That all this stuff is, in fact, happening in Trump’s America may be a valid point, but it is a point that will be lost on some viewers.

And with Americans already exhausted and scared, piling on night after night of chaotic protests will eventually work against the protesters’ goals. Very intelligent people don’t seem to get that.

Yale historian Timothy Snyder was just on Rachel Maddow saying, “If you’re not protesting now, this would be a good time to start.” That might have won him warm applause at the MSNBC studios, but it also greenlighted political events that even responsible organizers can no longer control.

Anxiety sells news. If two marchers among hundreds hold up idiotic “Defund Police” signs, they will be the featured image.

For the record, most black mayors want better policing, not less of it. “We do not call for abolishing or defunding police departments,” said McKinley Price, mayor of Newport News, Virginia, and president of the African American Mayors Association.

Again, no one is questioning the right to demonstrate, only the wisdom of letting it move the focus away from rampant disease, a plummeting economy and lockdown stress that has drained so many people of their self-control.

In fewer than 100 days, Americans will have an opportunity to send Trump packing. Those who want that should avoid becoming bit players in his staged spectaculars.

If protest leaders are smart — and have sympathy for their suffering cities — they will turn their attention to registering voters and away from large gatherings in the streets, at least until the election. Isn’t more than 50 straight days of protests in Portland enough for now?

The answer in Trump world would undoubtedly be no.