When Federal Troops Swept Away the Bonus Army 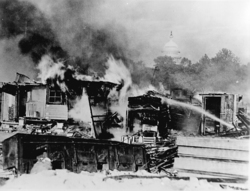 On this date 88 years ago, an American president superseded local authorities and unleashed the U.S. Army on protesters who’d been camped for two months in Washington. The troops rousted the demonstrators from the capital and torched their makeshift homes.

As the conflagration lit up the night sky, many Washingtonians living through that grim July in the heart of the Great Depression wondered if the nation was coming apart. The men driven from their shacks had been soldiers themselves. Only 15 years earlier, they were the cherished “Doughboys” who had sailed the Atlantic under John J. Pershing and marched into battle as the American Expeditionary Forces.

In 1924, Congress had voted the World War I combat veterans a bonus for their service, but the legislation was little more than an election-year publicity stunt by political incumbents. No money was appropriated to finance the program, and the vets wouldn’t draw on their bonuses until 1945. When the Great Depression threw many of these men out of work and left their families destitute, they marched again, this time on their own capital. They called themselves the Bonus Expeditionary Forces.

But Congress held fast, and local health officials began to fear an outbreak of disease in tent and shack encampments along the Anacostia River. That was one concern; another was Army Chief of Staff Douglas MacArthur’s belief that the Bonus Army was headed by communists. In any event, President Herbert Hoover gave the order to force the evacuation, and armed columns of infantry, backed by tanks, cleared them out — a confrontation with current reverberations.

On July 28, 1932, the U.S. Army did as it was told when it routed members of the Bonus Army and their families. Actually, it did more than it was told, which was no surprise, considering that Douglas MacArthur was in command. Political unrest was in the air, as it is today. The communists that Gen. MacArthur saw under every demonstrator’s cot had been active in December 1931, when hunger strikers marched on Washington. In January, a Pittsburgh priest named James Renshaw Cox led some 25,000 out-of-work Pennsylvanians to Washington.

And on a cold winter’s day in early March, Communist Party USA organized a Michigan “hunger march” from Detroit to Dearborn. Before reaching River Rouge, Ford Motor Company’s largest plant, heavy-handed Dearborn police turned the march into a riot; five marchers were killed by gunfire and wounded survivors were chained to their hospital beds.

This was the cauldron that the Bonus Army stirred when it occupied Washington starting in May. These men had fought for their country, however, and they and the hollow-eyed women and children who accompanied them engendered sympathy from most of those they saw.

One empathetic Washingtonian was Evalyn Walsh McLean, the wife of Washington Post owner Edward Beale McLean. Mrs. McLean was the daughter of Thomas Francis Walsh, an Irish immigrant who’d made it big in the gold and silver mines of Colorado before the turn of the century. “Daughter, I’ve struck it rich,” Tom Walsh told his daughter one day in 1896.

Evalyn, who was sent to finishing school in Europe and moved with her family to a mansion in Washington, D.C., took this line for the title of her autobiography: “Father Struck it Rich.”

She and her husband built a mansion, entertained lavishly, purchased the Hope Diamond, and were featured in a Cole Porter song. Evalyn also became friends with Alice Roosevelt and Florence Harding.

By 1932, life had changed. The McLeans’ marriage was on the rocks, and the Depression reminded Evalyn of her humble roots. When members of the Bonus Army marched by her elegant home, she watched them go by and then went to bed. But sleep wouldn’t come, so she got out of bed, woke her 16-year-old son, Jock, and drove with him to see the men in their camps.

“When Jock and I rode among the bivouacked men I was horrified to see plain evidence of hunger in their faces,” she recalled. “The Capitol was beautifully lighted. I wished then for the power to turn off the lights and use the money thereby saved to feed the hungry.”

Mrs. McLean approached one of the men. “Have you eaten?” she asked. He shook his head no.

She saw Pelham Glassford, a retired brigadier general who was then superintendent of Washington’s police department.

“I’m going to get some coffee for them,” Glassford told her.

Childs was an early restaurant chain that started in New York. At 2 a.m. that June night she walked into the one on Pennsylvania Avenue. “Do you serve sandwiches?” she asked. “I want a thousand. And a thousand packages of cigarettes.”

“But lady…” the clerk said.

“I want them right away,” she replied. “I haven’t got a nickel with me, but you can trust me. I am Mrs. McLean.”

It was a noble gesture and one deeply appreciated by the people who ate those sandwiches that morning. But it wasn’t enough, and everyone knew it. Congress — and this part sounds contemporary — couldn’t agree on a response. Despite threats of a presidential veto, the House passed a bill giving veterans some relief. But it didn’t get out of the Senate, and a month later the Bonus Army’s makeshift housing, and its hopes, were put to the torch.

“Flames rose high over the desolate Anacostia flats at midnight tonight,” the next morning’s New York Times account began, “and a pitiful stream of refugee veterans of the World War walked out of their home of the past two months, going they knew not where.”