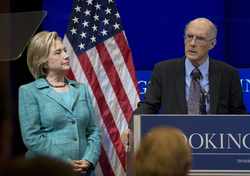 The mysterious "Primary Subsource" that Christopher Steele has long hidden behind to defend his discredited Trump-Russia dossier is a former Brookings Institution analyst — Igor "Iggy" Danchenko, a Russian national whose past includes criminal convictions and other personal baggage ignored by the FBI in vetting him and the information he fed to Steele, according to congressional sources and records obtained by RealClearInvestigations. Agents continued to use the dossier as grounds to investigate President Trump and put his advisers under counter-espionage surveillance.

More Leaks From The Supreme Court, All Of Which Make Roberts Look Powerful – Reason.com