Joel Kotkin Q&A on ‘The Coming of Neo-Feudalism’ 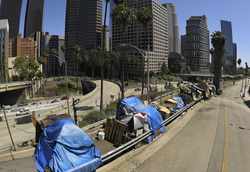 Let’s start at the beginning, Joel. In talking about your new book, “The Coming of Neo-Feudalism: A Warning to the Global Middle Class,” do you literally fear that liberal capitalism is losing out to economic “feudalism”? And please put that word feudalism in a modern context for our readers.

The parallels are striking. In the long centuries after the feudal era — let’s say starting around 1200 ACE — there was a slow, but gradual rise of upward mobility and growing power to the middle class. In the 20th century this progress was extended to the working class. Despite its many crises, liberal capitalism provided a better way of life and higher expectations not only for Americans, but also Europeans, Japanese, east Asians, including China, Canada, Australia and even some developing countries.

That progress stalled in the 1970s in the West, as wealth began to concentrate in fewer hands and income growth all but ended for the vast majority. Instead, we see the rise of two classes that parallel the feudal structure. One is the oligarchy, notably in Silicon Valley, and the other is a modern version of the clerisy; one replicates the military aristocracy that rose after the end of the Roman Empire; the other, the powerful priesthood of the Catholic Church. Meanwhile the middle class, what I call the property-owning yeomanry, has declined while the ranks of the new serf class — essentially those with no hope of achieving property ownership or a shot to move into the middle class — have expanded.

This is the essence of neo-feudalism.

You sound the alarm about the fate awaiting the “global” middle class, but the book’s epicenter is in California. You have a contrarian opinion of the prevailing view, which was recently expressed this way by progressive writers Peter Leyden and Ruy Teixeira: “Cali­fornia is the future of American politics.” Apparently, you no longer believe that’s something to celebrate.

I have lived in California for nearly a half century. When I came here, it was the land of opportunity. Sure, there was poverty but also a lot of upward mobility. People came here to make their lives better. Now California suffers large-scale middle- and working-class out-migration and the highest poverty rate, adjusted for costs, of any state. Inequality, as James Galbraith and others have found, is about as steep as anywhere.

Our once-dynamic politics are frozen in place. California’s thriving two-party system morphed into a one-party state dominated by tech oligarchs, public employees, and green activists. The state’s Republican Party, which once loomed over the nation, has withered into a small Trumpist cult with perhaps 40% support at best.

In those halcyon days, futurists would exclaim, “I’ve seen the future and it works!” They were talking about California, a state that managed to combine social tolerance with dynamic technological innovation. But reading your book, I’m reminded that the line originally belonged to Lincoln Steffens and that he was talking about the Soviet Union in 1919.

How apt. The progressives now often act like Walter Duranty, the New York Times reporter who essentially flacked for Stalin during the great famine. They don’t want to hear anything bad about California because it is their role model. How often are Gavin Newsom or Kamala Harris, both former San Francisco officials, blamed for that city’s disorder and mass homelessness? How often do reporters note that despite the ruinously expensive environmental policies, the state has not even done a better-than-average job of reducing greenhouse gases, while cynically sending more of its production out-of-state? We may be mandated to use electric vehicles, but it’s increasingly clear they will be built elsewhere, as Tesla just announced its new expansion will be outside Austin. Ditto with SpaceX, which has been shifting from Southern California to Texas and Florida. Imagine what these plants could have done for south L.A. or Fresno!

If we had a Republican governor, the knives would be out from the progressive-dominated media. Yet whatever the party in power, economic injustice remains even if presided over by people with the “right” ideology. The hypocrisy is just more obvious now.

Joel, you and I were young reporters together in California when Jerry Brown was governor the first time. What has changed most about the state since then?

The California of that time had a great sense of optimism. We witnessed an amazing influx of talent and ambition from all over the world. Los Angeles was becoming a great cosmopolitan city. Now domestic migration has turned sharply negative and immigration from abroad has dropped as well. We had an economy that included tech, entertainment, manufacturing and business services. These have all declined, particularly outside the Bay Area.

On a personal note, L.A. was a very welcoming city. As the years went on, it became less so, as people struggled with high housing prices, rents, ever growing regulation, dysfunctional schools, and higher taxes. It became more like New York but without the cultural advantages and rich intellectual life. We moved five years ago to Orange County where people are generally nicer and you can get around somewhat easily. It also has a two-party system, which puts pressure on officeholders to perform.

In those days, Californians looked down on Texas. Among other things we boasted about: Mexican Americans in California were demonstrably better off than their counterparts in Texas and other states. In your book, you document that this is no longer true. What happened?

Texas has been the big winner. It has become more cosmopolitan — by some measures Houston is now more ethnically diverse than L.A. It has a broader economy. Latinos do better there (a vibrant two-party system makes competing for their votes mandatory), as do African Americans in terms of education, homeownership and incomes compared to whites. We are seeing other ascendant regions such as Raleigh-Durham, Nashville, Des Moines, and even smaller areas like Fargo, North Dakota, northwest Arkansas (headquarters to Walmart, J.B. Hunt and Tyson), Huntsville, Alabama, and Madison, Wisconsin.

If there was a California “miracle,” and I think it was true, it is now occurring increasingly elsewhere. For a dedicated Californian this is very painful. I still believe California has the resources and know-how to create a functioning social democracy based on work, not welfare, but there is little political support for what would be something of a return to the old Pat Brown policies of nurturing growth and the middle class. The greens, the greedy, self-absorbed oligarchs and the government clerisy have no interest in developing an independent citizenry; they want numbed subjects they can rule and cajole with little restraint.

You write that California is simultaneously the richest and poorest state in America — that it has the highest poverty rate, adjusted for cost of living, than any state in the country, and that 8 million Californians live in poverty. How much of this is driven by exorbitant housing costs? Is there any solution to sky-high real estate? This is a crisis all the way up the West Coast, past the Canadian border — and on the East Coast, too.

The real estate problem is two-fold. California regulatory policies make it very hard to build housing in the periphery, where land is cheaper. Densification is the state priority, and that generally means not only higher prices but less of the single-family or townhome-type that families tend to prefer. At the same time, you have an economy which produces overwhelmingly low-wage jobs; over the past decade 80% of new jobs pay below the median income and half of those under $40,000 a year. When you factor these two things together, coastal California has the most unaffordable housing in the nation. People escaping to places like Denver and Seattle are widely seen as raising prices there.

In the process, California, the state that long symbolized youthfulness, has become far better to older folks like me who came when the getting was good. New Californians, and the children of the Baby Boomers, largely cannot afford a house, and few earn enough to even think about it. When people hit their 30s, they are forced to choose whether to stay in this remarkably attractive state or start an adult life elsewhere. Now we are aging 50% faster than the rest of the country. The surveys show that it’s minorities and millennials who generally are most dissatisfied. The older cohorts may not like all the changes, but they often have made a fortune from their homes, protected by Proposition 13. Public employees can retire on plush pensions. Meanwhile the tech elite depends on imported labor, both for skilled labor and low-end services. The opportunities for people living here are too limited, as companies expand elsewhere in the U.S. or abroad, to establish a middle-class life more possible elsewhere.

I assume that all the gaps you write about in “The Coming Neo-Feudalism” have been exacerbated by the pandemic-induced lockdown.

The pandemic has accelerated the shift to neo-feudalism. The big losers have been the working poor, many of whom have lost their jobs. The yeoman class, the small businesses already hit by the shift to online shopping, has been decimated. Main Street, when it returns, will be even more dominated by chains. The big winners have been the tech oligarchs, who now dominate the stock market to an unprecedented degree but produce not many middle-class jobs. The clerisy — that is, the professional managerial class — has done well, expanding their power, working at home, and, particularly in the government, still getting paid.

I see that a very “woke” high school student from the East Bay pressured Trader Joe’s to change some packaging labels after she detected racism in such logos as “Trader Jose’s.” What do you see as the lasting class and race implications for the economy in the post-COVID, post-George Floyd world?

The racial agenda of the “woke” is powerful in California, even as African Americans leave the state and increasingly working-class Latinos join them. The Black Lives Matter group is focused on police issues and is basically neo-Marxist. They will not be able to address the real problems behind the racial gap such as awful schools, lack of upwardly mobile jobs, family disintegration, and high house prices. The left in California seems to have forgotten the goal of social democracy, which was to make everyday life better and create more upward mobility. Instead they obsess on how to re-create the arts and media in their image.

It is astounding to see our big companies give in to demands from people whose long-term goal is to eliminate their existence. I suppose they may think that by doing symbolic acts to meet the demands of racial or gender grievance they can continue to consolidate their wealth and power unimpeded. Keep the wolves from the door. But if they really cared about social justice, they would care about how people are treated in China. But that would hurt their bottom line.

What role, good or bad, have environmentalists played in creating the “feudal” conditions you describe?

In California, the greens have limitless money and the backing of both the oligarchy and the clerisy. They have been critical in pushing business, particularly industrial ones, out of the state, while driving up energy prices. As environmental activist Mike Shellenberger and others have pointed out, the green movement has very little interest in how their policies impact most people. They believe with a religious fervor in their worldview and like to marginalize anyone who disagrees. Maybe skeptics and dissenters are not being burned at the stake, but they are always in danger of being rubbed out of existence on the Internet and in the mainstream media. Feudal mentality, digital methods.