Unyielding Realities Forced Trump to Cancel His Own Party 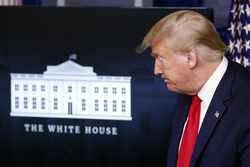 The summer of cancel culture continues. But the latest chapter comes courtesy of the president — and voluntarily. Trump surprised the political world Thursday by calling off the Republican National Convention barely a month before it could begin.

The party won’t happen as planned, the president told reporters in the White House briefing room, because “the timing for this event is not right — it’s just not right.” He will still address delegates in Charlotte, N.C., the original site of the quadrennial gathering. He will presumably accept the nomination there too. He will not, however, enjoy all the pomp and splendor that was planned in Jacksonville, Fla.

The timing was equal parts telling and curious. For months, the president had insisted that the show must go on, and that was the reason he ordered the convention to move farther south from the Tar Heel State (where the Democratic governor said coronavirus restrictions would be in place) to the Sunshine State (where the Republican governor promised greater access). But the shadows were big, and they kept growing.

Worries about staging a large political bash during a pandemic were paramount, Trump said. Not mentioned but also significant, sources tell RealClearPolitics, were fears of violent protests and uglier, more costly, questions of political liability. It could have been a redux of the Democratic National Convention of 1968, this time with the added layer of a public health crisis.

Trump spoke with open regret in the briefing room, remarking on the “tremendous” list of speakers that he and his party had planned. Always a showman but now president, he said the party just couldn’t happen: “It’s really something that, for me, I have to protect the American people.”

His political team could pull it off safely and responsibly, he insisted. They told him as much, Trump explained, adding not without a little nostalgia for the celebrity-fueled 2016 event, that there was “incredible enthusiasm.”

But the president, who regularly urges a return to normalcy where possible, insisted that a convention wasn’t right.  “There’s nothing more important in our country than keeping our people safe, whether that’s from the China virus or the radical-left mob that you see in Portland.”

Coronavirus is new. The violence referenced is not. Fifty-two years ago, mayhem exploded as thousands of Vietnam War protesters battled police in the streets in Chicago, overshadowing the Democratic nomination of Vice President Hubert Humphrey and then marring his election chances.

It was August of that year, and the country was still reeling from the assassinations of Robert Kennedy and Martin Luther King Jr. Not unlike today, ongoing racial unrest followed. Very similar clashes are taking place now but this time with a biological accelerant: A virus still rages uncontrolled, triggering a pandemic that has wrecked global economies, transformed everyday life, and sapped the reelection chances of the incumbent.

All of this was known. Everyone talks about it, from whispered conversations between Republicans in the Senate to shouted conversations on cable. But the news surprised the insiders. And it put Grand Old Party operatives back on their heels Thursday evening.

There had been suspicions that a more boisterous, festive party could be canceled, sure. Rumors circulated this week that worries over funding and pricey legal fees might shutter the whole thing. But could the showman-in-chief be denied? Few expected that, and even fewer thought that he would deny himself.

Then there was the meteorological concern. A virus spike in Florida had forced convention planners to consider an open-air venue for the speeches and pageantry. Perhaps even worse than the August heat, a climate even swampier than Washington’s, was the threat of sudden, seasonal downpours. Those would not only sour the mood but provide powerful, soaking images for the opposition to exploit in campaign ads.

These were thoughts behind the scenes. The RNC tried to reassure reporters earlier this week of its ability to protect both the health and security of convention guests after it announced plans to restrict in-person participation during the first few days. On Tuesday a party spokesman told RCP that GOP officials were working “closely” with local leadership in Jacksonville to finalize health and security preparations. The Department of Justice already had the green light and was in the process of allocating millions of dollars in a “safety grant.”

“Jacksonville has accommodated upwards of 70,000 people for football games and other events, and we are confident in state, local and federal officials to be able to ensure a safe event for our attendees,” the spokesman said.

But those plans are all for naught. Jacksonville will not see a presidential candidate nominated. Instead, the GOP looks back north to Charlotte where it had originally planned to hold the convention. There, at the spot of the RNC’s summer meeting, some Republicans and Trump World will gather. Come morning on Aug. 24, a fraction of the convention delegates will cast proxy votes on behalf of more than 2,500 to officially nominate Trump as the party’s choice for president. There will not be room for the usual knife fighting in the platform committee as that 2020 body will simply re-endorse the 2016 document.

There will also be no balloon drop in Charlotte or Jacksonville after the president gives his acceptance speech, likely delivered online and on TV. In the end, the complicating concerns of a pandemic became impossible to ignore. Trump realized as much and canceled his own party.

Coronavirus updates: 'This virus is controllable,' WHO says