Military Needs a President Who Leads by Example, Not by Tweet 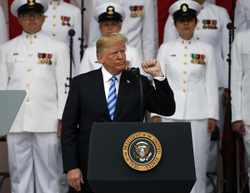 Lead by example. Character counts. Country before self. These simple maxims were drilled into me as a young soldier going through Army basic officer training. These are the foundational values of American leadership for which every American service member is willing to sacrifice his or her life. Yet these military values are disappointingly alien to President Trump.

Serving in Afghanistan, I quickly learned that talk and bluster never defeat the enemy. But dedication to duty and courage rooted in genuine character yield true leadership that can overcome almost any obstacle. American service members deserve a commander-in-chief who leads by personal example rather than by tweets.

President Trump likes to say he supports the troops, but he dodged the draft with claims of bone spurs. (Somehow, the bone spurs didn’t stop him from playing football, tennis, and squash.) He trivialized the grief of widows and parents who lost their spouses and children in military service. And he mocked the service of our brave POWs, such as Sen. John McCain, by saying he prefers service members who weren’t captured. It therefore comes as no surprise that President Trump cared little when intelligence came to him suggesting the Russian government paid the Taliban bounties to kill American troops in Afghanistan.

Now, President Trump is proposing to recklessly cut troop strength in South Korea and Germany. Having just served a tour with an Army Reserve unit based in South Korea, I recognize how President Trump’s remarks weaken U.S. global leadership. I am troubled by his carelessness in emboldening China and Russia at the expense of American defense.

As a new lieutenant, a non-commissioned officer once wisely told me to go easy on young soldiers when they mess up their dress uniforms, but to be absolutely strict during live-fire weapon exercises. As he put it, “Nicely pressed pants will never save your butt in a fire-fight, but shooting straight – literally and figuratively – will.”

President Trump seems to have learned the opposite lesson. The president clearly enjoys parading around military equipment and being photographed with troops in neat uniforms. But he fundamentally misunderstands the soul of the American service member. It isn’t the hardware or the uniforms that make the American military such a proud and effective fighting force; it is the dedication to duty and selfless sense of honor inside each individual soldier, sailor, airman, and Marine.

Don’t just take it from me. Retired Marine Corps Gen. Jim Mattis, who served as President Trump’s first defense secretary, built a reputation as “Mad Dog” for his courageous tenacity in combat. (Contrary to President Trump’s claims, Mattis had the nickname before they ever met.) He remarked, “Donald Trump is the first president in my lifetime who does not try to unite the American people – does not even pretend to try.” When President Trump calls for the military to “dominate” inside America, he fails to understand that the U.S. military serves the people and must never become a political tool of the president.

The former chairman of the Joint Chiefs, Adm. Mike Mullen, wrote after the George Floyd protests that President Trump “laid bare his disdain for the rights of peaceful protest in this country, gave succor to the leaders of other countries who take comfort in our domestic strife, and risked further politicizing the men and women of our armed forces.”

These are the words of officers who dedicated their entire adult lives to defending the American people, not utopian college students or left-wing Bernie-crat socialists. They understand honor because they’ve lived with it. They recognize sacrifice because they’ve witnessed it on the field of battle.

Together, these veterans reveal the simple truth that President Trump is not a leader. He is a man unfit to serve as commander-in-chief of the greatest armed service in world history.

Vice President Biden is fit for that command. His son, Beau, graduated a year ahead of me in college and was in the Army basic class immediately before mine. Beau served in Iraq, and I know the Biden family understands what it means to have a loved one sent into harm’s way. That’s something Trump never experienced and does not understand.

Though I served in Congress as a Republican and though I don’t agree with many of the Democrats’ policy ideas, I trust Joe Biden to be commander-in-chief. He has the experience, both as a father and as a statesman, to succeed where President Trump has failed.

Charles K. Djou is a former Republican congressman and an Afghanistan war veteran.