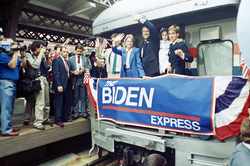 Last week, Democrat nominee for president Joe Biden delivered an economic speech under the slogan “Build Back Better.” Despite the radical proposals contained within the speech, that’s some clever branding.

Following these latest incidents, one can’t help but flash back to Biden’s well-documented history of plagiarism, which dates to his first presidential campaign in the summer of 1987, a bid that ended ignominiously amid repeated examples of plagiarism and outright fabrication.

It’s also important to note that he’s been accused of lifting entire sections of speeches from others for his own use without attribution. And of copying, almost word for word, policy platforms of other candidates.

He’s even been caught lying to voters about his academic record. Biden acknowledged that he had plagiarized during his time at Syracuse University Law School. The law school had him repeat a first-year class, after initially flunking him, for copying at least five pages from a published law review article.

Thirty-three years is a long time ago. The problem is that Joe Biden has never really stopped. In 2008, then-Sen. Biden copied an entire paragraph from a Time magazine story on then-newly elected President Lee Myung-Bak of South Korea and used it for a speech, without attribution. Biden had the stolen language read into an official congressional resolution in February 2008.

His problem with copying the work of others is so widespread that a 2019 incident, in which the Biden campaign released a climate plan using exactly the same language as outside left-wing groups, without attribution, barely made news.

The most egregious example, as described by Maureen Dowd when it happened, occurred Aug. 23, 1987, during a debate at the Iowa State Fair. Biden had been lifting entire lines of his stock stump speech from Britain’s then-Labor Party leader, Neil Kinnock, who was campaigning for prime minister across the pond.

As reporters dug deeper, they found more. Biden didn’t just steal Kinnock’s political rhetoric, he appropriated his life story, including a coal mining grandfather.  This was worse than it looked: Kinnock’s Welsh grandfather did work in the mines. Biden’s, although he lived in Pennsylvania coal country, sold cars. Did Biden believe that British politics was so removed from Americans’ experience that he could get away with it? Maybe, but if that were the case, Biden wouldn’t have ripped off lines almost directly from John F. Kennedy and his brother, Robert Kennedy.

On June 9, 1987, when declaring his candidacy, Joe Biden said, “Let us pledge that our generation of Americans will pay any price, bear any burden, accept any challenge, and meet any hardship to secure the blessings of prosperity, and the promise of opportunity, for our children.” Biden’s words were not attributed to President John F. Kennedy, who famously said during his Jan. 20, 1961, inaugural address: “We shall pay any price, bear any burden, meet any hardship, support any friend, oppose any fall, to assure the survival, and the success of liberty.”

These very specific instances sunk Joe Biden’s chance at being the nominee in 1988. More importantly, these acts of blatant dishonesty highlight some very grave concerns over his integrity and character.

Now, 32 years later, the American people should come to the same conclusion about Joe Biden — he’s nothing more than a 47-year career politician and empty suit, willing to say and do anything to fulfill his personal political ambitions.