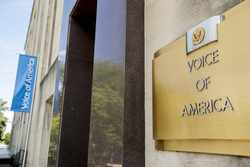 President Trump’s new broadcasting chief has faced a barrage of hostile fire from the media and critics in Congress long before his arrival at the U.S. Agency for Global Media in mid-June, a post he attained after opponents repeatedly tried to derail and undermine his nomination for more than two years.

Critics have warned that Pack would turn the USAGM into a Trump propaganda megaphone while Pack has countered that he simply wants to return the taxpayer-funded agency to its original mission and charter — to “present the policies of the United States clearly and effectively” to foreign audiences and to “present responsible discussions and opinion on these policies.”

Trump has repeatedly defended Michael Pack, a conservative documentary filmmaker, and lambasted the entity he now heads as having been wildly off course from its original mission and in desperate need of reform. The latter view is one shared by Hillary Clinton during her time as secretary of state and members of Congress on both sides of the aisle.

The administration now wants Congress to know it also has Pack’s back.

The White House is planning to issue a broad veto threat to an appropriations “minibus,” a bill covering 2021 fiscal year spending for the departments of agriculture, interior, state, veterans affairs and more. While the major focus of the threat is the bill’s failure to deliver requested border wall funding, another sticking point is language that the administration argues is aimed at crippling Pack’s power as CEO.

In the official Trump veto threat, the Office of Management and Budget said the administration “strongly opposes” language requiring the use of USAGM funds to implement a new regulation that outgoing agency officials put in place shortly before Pack was installed in the top post. After his Senate confirmation, Pack officially took the reins on June 17; the new regulation aimed at handcuffing his ability to reform the agency took effect June 11.

While still president in early 2017, Barack Obama signed a must-pass bill that also included language giving the USAGM chief far greater powers, among them the capacity to hire and fire top officials and bring in a new team. When Trump won two months earlier, the outgoing administration unsuccessfully tried to undo that new authority in an attempt to neuter the incoming president’s broadcasting chief before he even showed up at the agency’s front door.

The first few weeks of Pack’s USAGM tenure have been tumultuous. As widely expected, he almost immediately dismissed the heads of four media organizations the USAGM oversees. Critics labeled the moves a “Wednesday night massacre” and issued an onslaught of new warnings in the media that Pack was instituting a right-wing takeover. Then, many of those who lost their jobs filed lawsuits. A U.S. federal judge in early July ruled that most of the firings were legal while an appeals court earlier this week said an effort to change the leadership of a related nonprofit fell outside Pack’s powers.

The firewall regulation is yet another bureaucratic weapon opponents are trying to use against him. Couched in language purporting to protect the agency’s journalistic integrity and independence, it establishes an expansive barrier preventing Pack and several other top USAGM officials from making changes to the operations of the agency’s many media networks, including its flagship Voice of America, Radio Free Asia, Radio Free Europe and related sister outlets.

The White House argues the language in the spending bill is “unnecessary and redundant,” and is actually unconstitutional because the USAGM is part of the executive branch and therefore cannot operate independently of its politically appointed chief executive.

For decades until Pack’s arrival, the CEO’s job was to set the agency’s journalistic standards and policies and to manage taxpayer-funded international broadcasting outlets that fall under the USAGM umbrella, the White House argued.

“While the ostensible purpose of the language and the regulation it refers to is the protection of journalistic integrity, its practical effect is to preclude the CEO from exercising the authorities provided to the leadership position with strong bipartisan support in 2017,” the White House said. “The president has been clear in his support for the agency, its leaders and the needed reforms to ensure that it carries out USAGM’s mission to inform and engage world audiences and Voice of America’s mission to represent the United States, its people, and its policies worldwide and to be a reliable and authoritative source of news.”

Pack’s administration supporters argue the regulation amounts to a last-ditch attempt to cut him off at the knees. The legislation empowering the CEO’s role immediately dissolved the board of governors when Pack was confirmed. Knowing this would happen, the outgoing board wrote the broad firewall regulation in late May.

After Pack fired several agency officials and tried to bring in his new team, critics lobbied Congress to intervene. A bipartisan group of senators, led by Marco Rubio, a frequent GOP Trump critic, and Democrat Bob Menendez, who has aggressively fought Pack’s nomination, recently wrote a letter to the new CEO expressing concern over the firings and pledging to review the USAGM’s funding.

“Given the bipartisan and bicameral concern with recent events, we intend to do a thorough review of USAGM’s funding,” the letter explained.

The regulation was put in place despite longtime bipartisan calls for a major overhaul at USAGM, which recently changed its name from the Broadcasting Board of Governors. Seven years ago, then-Secretary of State Clinton described the BBG as “practically defunct in its capacity to tell a message around the world,” a view shared by Republicans and Democratic lawmakers alike.

“People in the agency have wanted parts of it to be completely independent from government and oversight even though it’s taxpayer-funded,” one source close to USAGM told RealClearPolitics. “We were created to tell America’s story and put truthful information out about the U.S. to counter propaganda from Iran and other adversaries, not to compete with MSNBC, CNN and Fox.”

A major overhaul is needed, Pack and his supporters argue, after the agency has been rocked by management failures and a series of scandals that prompted congressional investigations.

Last June, a former chief strategy officer for the agency, who worked closely with the former CEO, went to prison for stealing nearly $40,000 in government property during his tenure.

In another scandal, a reporter for TV Marti, which broadcasts into Cuba, and a cameraman were suspended after being accused of faking a mortar attack while broadcasting from Nicaragua in 2018.

In the fall of 2018, the VOA fired 15 of its employees in Africa after discovering that they were accepting bribes from a Nigerian official. In addition, that same year three VOA employees were suspended and at least one was fired for conducting an interview with a controversial Chinese dissident. The chief of VOA’s China division, one of those suspended, said VOA leadership in Washington was caving to pressure from the Chinese government.

In late 2018, the House Foreign Affairs Committee concluded a three-month investigation that determined USAGM management must be strengthened in order to fix what the report deemed a “broken agency.” It cited internal problems that have allowed the Russians, Chinese and other U.S. adversaries to gain the upper hand in the information warfare sphere.

A late 2018 report by Stanford University’s Hoover Institution cited concerns about Chinese officials’ influence on American institutions, including specific details about China’s “charm offensive” and tougher tactics on VOA and Radio Free Asia employees working in China. That report cited what it called a “pattern” by VOA Mandarin Service of avoiding stories that could be perceived as too tough on China and detailed activities by Chinese security officials it said amounted to a “campaign of intimidation against some VOA and RFA staffers and their family members.”