Police Reform Is at a Critical Juncture 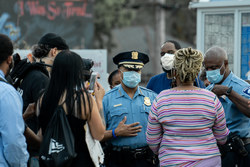 The televised killing of George Floyd by a Minneapolis policeman and mass protests against various slayings of African Americans at the hands of law enforcement have created a unique opportunity for police reform in the United States.

But the expanding COVID-19 pandemic, the deep plunge of the U.S. economy and partisan conflicts have slowed the momentum of reform, raising concern among its advocates that a consequential moment may be lost.

Ironically, the most controversial proposal – defunding the police — has gathered more traction than reforms on which there is broad agreement such as extending community policing, improving police training, collecting better data on problem officers, banning chokeholds and equipping officers with body cameras they are required to use.

Defunding is opposed both by President Trump and by Joe Biden, his Democratic opponent. Willie Brown, the first African American speaker of the California Assembly, has called defunding “the hands-down winner of the worst slogan ever.”

Several studies have shown that increasing a police presence diminishes crime and that reducing the number of police does the opposite. But advocates of “defunding” caution against a literal definition. Defunding embraces multiple proposals, such as diverting some police spending to mental health professionals and handing off lesser duties such as parking enforcement to other departments.

Reforming police policies requires more time and study than many states and cities have been able to muster as they struggle to balance budgets compromised by the pandemic-induced collapse of sales tax and income tax revenues.

The NYPD has more than 36,000 officers, and the budget cuts will cancel an incoming class of 1,163 police cadets. The LAPD will fall below the 10,000-officer level that has been a benchmark since the 1992 Los Angeles riots.

New York and Los Angeles can probably absorb the reductions. Smaller cities and counties – the bulk of the nation’s 18,000 law enforcement agencies — will find the cuts more burdensome.

Santa Barbara is a city of 90,000 on the central coast of California. It can live with a reduction of $2.3 million in its $47 million police department budget, but had planned this year to replace a dangerously antique police station that does not meet earthquake-safety standards. The City Council has indefinitely delayed the new station.

On a federal level the police killings of Floyd and of Breonna Taylor in Louisville, Ky., created a fertile political environment for changing policing in America, observed Washington Post columnist and policing analyst Radley Balko. “But competing bills recently introduced in the House by the Democrats and the Senate by the Republicans aren’t seizing this moment so much as gently taking it by the hand and asking in hushed tones if it would like to come along,” Balko wrote.

Partisan politics in an election year has halted these bills. The House passed a strong reform measure mostly on party lines, but the Republican-controlled Senate declined to consider it. Lacking the numbers to push the House legislation forward, Democrats have managed to block a milder Republican bill.

The only federal action has been an executive order issued by Trump that encourages police forces to improve training. Critics have dismissed this exhortation as an empty gesture, but the order has at least one useful feature: establishing a national database to track police officers with multiple incidents of misconduct. The FBI already maintains a database, but only 40% of U.S. police forces contribute to it.

Centralized policing began in the United States early in the 19th century and was followed almost immediately by calls for reform. Well into the 20th century, most reform efforts were directed at uprooting police corruption.

In the 1960s alleged police brutality and the treatment of suspects became the focus of reform. In a landmark 1966 ruling, Chief Justice Earl Warren held in Miranda v. Arizona that police must inform suspects of their rights prior to a custodial interrogation.

In the wake of the 1992 Los Angeles riots following the acquittal of white Los Angeles police officers who were videotaped beating Rodney King, Congress passed the Violent Crime Control and Law Enforcement Act. It authorized the Justice Department to intervene when police engage in “a pattern or practice of conduct” that deprives people of their constitutional rights.

Since 1994, the Justice Department has conducted 70 investigations of state and local law enforcement agencies and negotiated 40 reform agreements, half of which were court-enforced consent decrees. The Trump administration has reduced such investigations.

State laws are also an issue. In a nuanced article in National Review, policy writer Robert VerBruggen wrote that state laws on police use of force vary widely, with many of them “incredibly out of date.” Several states, he wrote, still have laws on their books that allow police to use lethal force against nonthreatening suspects to stop them from escaping even though this practice has been deemed unconstitutional.

Another source of abuse by police has been the “no-knock warrant,” a byproduct of the war on drugs that was once used sparingly but has become widespread. Louisville police were using a no-knock warrant on March 13 when they shot and killed Taylor, a 26-year-old emergency room technician who was not the target of the raid. The Louisville City Council responded by banning such warrants in an ordinance known as Breonna’s Law.

No-knock warrants have also been banned in Houston through an executive order issued by Mayor Sylvester Turner that also prohibited police from using chokeholds.

The term “chokehold” refers to any neck hold. Strangleholds — also called carotid restraints or sleeper holds — temporarily cut off blood flow to the brain and are meant to render a subject unconscious. Chokeholds — also called airway holds — restrict breathing by applying pressure to the windpipe.

Following the George Floyd killing, California, Colorado, Connecticut, Iowa, New York, Oregon and Utah have banned police use of chokeholds either through legislation or a governor’s order. Among the nation’s 100 largest cities, chokeholds have been banned in Atlanta, Denver, Los Angeles, Louisville, Minneapolis, New York, San Diego, San Francisco and Seattle. Numerous smaller cities have also banned their use.

Colorado Gov. Jared Polis (D) has signed legislation (SB 217) that is a virtual checklist of policing reforms. In addition to banning chokeholds and requiring use of body cameras, this law requires discharge of any officer found guilty of unlawful force and bars police officers from offering an oft-used defense of “qualified immunity” when they are sued for violating a citizen’s rights.

The Colorado law also requires police to make an announcement and give people time to leave the area before using crowd-control irritants such as pepper spray and tear gas. In Oregon, one of the five policing bills (HB 4208) signed by Gov. Kate Brown (D) prohibits law enforcement agencies “from using tear gas for purposes of crowd control except in circumstances constituting riot.” Seattle has gone further. The City Council unanimously passed legislation that banned police from using tear gas, pepper spray or other crowd-control devices.

New York Gov. Andrew Cuomo (D) has signed five policing policy laws passed by the Democratic-controlled legislature. One of them (SB 6601) requires law enforcement officers to give “attention to the medical and mental health needs” of a person in custody.

These piecemeal solutions serve a useful purpose but do not address the central concern that arises from the killings of George, Taylor and others, which is that racial bias is embedded in the structure of most police forces, resulting in disproportionate killing and harassment of blacks and other minorities. Such bias also exists in other facets of American society, such as housing and employment, and is challenging to remedy.

The much-maligned Minneapolis Police Department has been engaged in reform efforts since 2015 and was considered a leader in training programs intended to reduce implicit bias and promote procedural justice. Now the City Council has pledged to dismantle the police department and seek “a new transformative model” for policing.

Minneapolis might consider the example of Camden, N.J., a poor and 90% black and Latino city of 74,000, across the Delaware River from Philadelphia. Camden fired its entire police force seven years ago because of financial reasons and a political power play aimed at breaking the police officers’ union. The reconstituted Camden County Police Department emphasizes community policing while also relying on surveillance technology that uses algorithms to develop patrol patterns based on social media, informants and past reports of crime.

The result has been a citizenry that accepts the police, a decline in gun violence and a precipitate drop in excessive-force complaints against the police from 65 in 2014 to only three in 2019. According to the Times, police officials talk about the “sanctity of life” as the overarching thread connecting the changes in policing.

That’s a useful mantra for police reform in any jurisdiction.

Lou Cannon is editorial adviser and columnist for State Net Capitol Journal, a Lexis-Nexis publication. He previously worked for The Washington Post and is author of “President Reagan: The Role of a Lifetime.”

The Sierra Club Asked The Supreme Court To Lift The Stay in The Border Wall Case. But There Is No "Equitable Ultra Vires Cause Of Action"