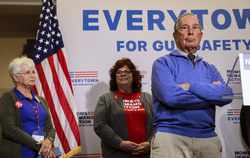 NPR, Politico, Time, and Scientific American are unlikely ever to pay an NRA employee to write news articles about gun control. But they have no problem hiring people who work for The Trace, a Michael Bloomberg-funded gun control organization. Even in the very hypothetical case that these publications did use an NRA-influenced article, they would undoubtedly include a disclaimer warning readers of the possible bias.

The Trace, which has made a business out of attacking people who have received money from gun rights organizations, doesn’t receive the same scrutiny from the rest of the media. Instead, news outlets hide or ignore The Trace’s financial ties to Bloomberg. NPR describes it as “an independent, nonprofit journalism organization dedicated to covering issues related to guns in America.” When I pointed out to a senior editor at Scientific American that contributing editor Melinda Wenner Moyer is also a regular paid writer for The Trace, he insisted that none of his staff had a conflict of interest and that The Trace was a nonprofit newsroom.

This past week, Moyer had a piece at The Trace arguing that the increase in gun sales over the last few months is linked to the recent surge in urban shootings. In another, she claimed that guns don’t keep one’s family safer.

But Moyer fails to mention the standing down and disbandment of police units, or the release of prisoners amid the pandemic. These factors can lead to a surge in crime. She ignores that the causation with gun sales might be going the other way, with people buying guns as they see the breakdown of the legal system and having to rely on themselves for protection. Instead, she blames the 30% increase in murders in New York City or the 78% increase in Chicago in June on gun sales that increased the national supply of firearms by only a couple of percentage points.

The Trace toes the same ideological line as Bloomberg’s other nonprofit gun control organizations, such as Everytown for Gun Safety. A search through the last several years of The Trace’s articles does not reveal any with a pro-gun slant. Not a single one approvingly discusses research that has found a benefit from gun ownership.

And that’s not for lack of pro-gun research. The largest survey of academics who have published peer-reviewed empirical research on gun violence (murders, suicides, accidental discharges, etc.), which I conducted with Arthur Berg of Harvard and Gary Mauser of Simon Fraser University, showed that criminologists and economists are generally very skeptical of gun control. Public health researchers were much more divided.

On the issue of concealed handguns (there are several dozen peer-reviewed papers), more than two-thirds find a benefit from people carrying them. Moyer’s article for Scientific American (“Journey to Gunland”) is typical of what she writes for The Trace. She focused on one paper claiming bad effects from concealed handguns, ignoring all the other research, including one study that looked at the same data and the same methods as the paper she discussed and showed how that small changes in their estimates produced the opposite results.

Other Trace articles last week attack the NRA and other groups such as Iowa Gun Owners. Over the years, you won’t find a single article that is critical of groups such as Moms Demand Action, Everytown, or The Brady Campaign. One recent article, “The NRA’s Unshakable Support for Police,” accuses the NRA of supporting the police because of the “reliable” donations that it receives from officers.

The Trace, like other gun control advocacy groups, is at odds with police in part because officers are so overwhelmingly in favor of gun ownership.  Recent anti-police headlines have included: “An Arkansas Cop Said He’d Shoot at Protestors. Then He Killed a Fellow Cop,” and “The ‘Warrior Cop’ Is a Toxic Mentality. And a Lucrative Industry”).

The article on Iowa Gun Owners again focuses on the influence of money. It claims that the group “honed a brand of fiery Second Amendment activism that doesn’t sway lawmakers, but keeps the donations flowing.”

Ironically, despite all of its attacks on others, The Trace never acknowledges just how financially beholden it is to Bloomberg’s deep pockets. The Trace attacks the NRA for buying influence with Congress, but you would never know from the site’s articles that while the NRA spent $880,000 on congressional races in 2018, Bloomberg invested $110 million.

As I show in my new book, “Gun Control Myths,” the money Bloomberg spends on gun control organizations such as The Trace and campaign donations are just part of the money that he spends pushing for more gun control.

The Trace seems to have a hard time believing that people could support gun ownership without being paid to do so. Maybe if the staff read some pro-gun academic research, they would understand that people have good reasons to believe in the power of self-defense.