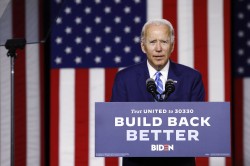 In Joe Biden’s America, control of U.S. Immigration law will be ceded to multinational criminal cartels.

This is an extremely harsh assessment, and it’s not made lightly; in fact, I wouldn’t make these allegations at all unless I had the proof directly from Joe Biden himself.

On July 8, his campaign rolled out the “Biden-Sanders Unity Task Force Recommendations.” This 110-page document details the presumptive Democratic nominee’s overall vision for America, including immigration.

Biden’s immigration plan calls for the elimination of any pretense of immigration enforcement, which is exactly what the radical left wants.

In his plan, Biden somehow equates enforcement of immigration laws with “systemic racism.” He declares that enforcement will not be allowed at or near schools, any commuting route to a school, any house of worship, health care facility, “benefits office,” state motor vehicle department, or courthouse. And that’s just the start. Biden would also disallow enforcement at any “workplace” and anywhere he considers a “community.” ICE, as an organization, would effectively be eliminated. Biden’s message to officers will be clear: Don’t enforce the law, period! And this is no exaggeration.

To make sure immigration laws aren’t accidently enforced by a third-party law enforcement agency — for instance, if local police officers catch an illegal alien committing other crimes — Biden will stop all cooperation between federal agencies, including the Border Patrol, and state and local law enforcement. No community will be spared from this lawlessness. And like a bad infomercial, it doesn’t stop there.

Biden proposes a complete moratorium on removing illegal aliens — in the middle of a global pandemic, no less — opening the floodgates to illegal immigration on a colossal scale that would completely overwhelm the U.S. health care system.

That’s because Biden wants to provide “free” government health care for illegal aliens — which would not only impose a massive burden on our hospitals, but would also serve as a magnet for limitless numbers of would-be illegal aliens around the world.

Biden proposes “investments” in “community-based alternatives to detention” for illegal aliens. That is code for spending lots of taxpayer money to make life as easy as possible for those who violate our immigration laws and then reside in the country illegally. He thinks detention is fine for Americans who break other laws, but illegal aliens must be treated better than Americans. Biden’s plan calls for tougher laws for U.S. citizens…and virtually no laws for illegal aliens.

Biden wants to substantially and dramatically increase immigration, but he doesn’t explain how suddenly bringing in millions of immigrant workers is going to help unemployed Americans.

Biden has more plans to spend billions of taxpayer dollars on non-citizens. But this time he wants to give it away to citizens in other countries. He states that “Democrats” will “address the root causes” of the massive migration he supports by giving money to other countries through what he calls “well-designed assistance programs.” In other words, he’s going to encourage and reward mass illegal migration to America while giving our money to other countries to stop the mass migration problem he’s helping to exacerbate. Makes perfect sense…as long as you remember that it’s not his money he’s throwing away; it’s yours.

Undoubtedly, the same left-wing politicians who wish to detain and fine American citizens for crossing state lines during the COVID-19 pandemic will support Biden’s free-for-all bonanza for illegal immigrants violating national borders. They want illegal aliens to travel freely from one country to another without regard to laws, rules, health, or public safety. Their selective “concern” for the health and welfare of Americans is so hypocritical, it’s nauseating. They’re perfectly happy to punish Americans for crossing a state line, but illegal immigration is to be celebrated, encouraged, and rewarded.

Biden’s kowtowing to the far-left extremists in his party has reached levels of absurdity rarely seen in American politics. The country will pay for his policies if he’s ever allowed to come into power.

Organized crime’s business models are based upon risk-reward calculations, and they always take the path of least resistance. If there is no consequence for criminal conduct, laws will be broken and the innocent will suffer. If all one has to do is “sneak” into the U.S. and rewards will follow, then there will be a lot more “sneaking” than we’ve ever seen before. Organized criminal cartels will be able to sell their services more easily and for more money; women and children will put themselves into their hands, profits will flow, and misery will ensue.

The U.S. is the greatest nation on Earth in large part because we uphold the rule of law. Without law and order, we are no better than the countries people are fleeing in order to come here. Biden’s extreme and dangerous plan would obliterate the rule of law in America once and for all.

The evidence is in, and Joe Biden convicted himself.

Brandon Judd is the president of the National Border Patrol Council, which represents all rank-and-file Border Patrol agents nationwide.

Will Trump send his son back to school? See Kellyanne Conway's response