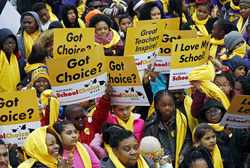 Are government schools really giving children the education they deserve? If you think the answer is “yes,” you haven’t asked a parent with a child stuck in a bad school. Cecilia Iglesias, President of the Parent Union, knows first-hand that our education system is in deep trouble.

So we left our home, our family—everything and everyone we had ever known. I guess you could say it was an extreme example of school choice.

It was a miserable bus ride to California—long and hot. But we made it.

That was the easy part.

My mother barely spoke English. I spoke none. When I complained to her that it was too hard to learn in American schools, I didn’t get much sympathy. We had reached the promised land—the promise of a good education, of unlimited opportunity. English—good English—was required. So I learned it. My mom made sure of that.

With that kind of background, you can imagine that I put a premium on the education of my own children. So when my son approached first grade, I took a hard look at the government school in our neighborhood.

I didn’t like what I saw. Academic standards were low. Discipline was lax. I saw no good future there for my son. But I didn’t have the money for private school.

I did some research. I found that my district offered something they call “a fundamental school”—kind of like a charter school—where they stress reading, writing, and math. The test results at this school were higher than at the government school. This was exactly what I wanted for my son.

I wasn’t the only one. Many other parents had come to the same conclusion. But there weren’t enough slots at the school to meet the demand. The only way to get in was through a lottery.

My son’s education was going to be determined by a lottery? I was frustrated and angry. But I had no alternative—no choice.

He didn’t get in the first year. But he did in the second year. We got lucky.

This didn’t make me any less angry, though. I decided to do something with my anger. I decided I would run for school board and push for every parent to have a choice of schools for their children. It shouldn’t be a matter of luck.

I had no experience running for local office. I certainly wasn’t a politician. I was just a mom with an issue. I guess that was enough because I won.

But like my long bus ride from El Salvador years ago, that proved to be the easy part. The government school system was in worse shape than I thought. Enrollment was declining, but costs were going up. We had more teachers making more money teaching fewer kids—with no test improvement to show for it.

“Why don’t we try school choice?” I suggested at a board meeting. Introduce competition—because competition almost always makes things better. This sounded like common sense to me. To the teachers’ union, it was treason.

First came the nasty emails. Then the ugly tweets. When I wouldn’t shut up, the union packed board meetings with their activists. They booed me. Called me names you wouldn’t believe. I was even physically threatened—all because I had made the case for school choice.

When they couldn’t intimidate me, they tried to get me thrown off the school board. When I decided to run for a second term, the union leaders declared war. They spent almost $250,000 against me in 2016—a quarter of a million dollars! For a seat on a local school board!

But I won. Again. This time, with more votes than any other candidate.

And the reason is clear to me: Parents want good schools for their children. They want choice. And this got me thinking…teachers have a union. Why not parents? So I started the Parent Union to give parents more of a voice. And now chapters are all over the state and in some of Southern California’s toughest neighborhoods.

It’s a battle. But I’m confident we’ll win. There are few forces stronger than a parent determined to get a good education for their child.