Erik Prince and Tucker Carlson: Neocons and Corruption Of Washington Keep Us In Afghanistan | Video 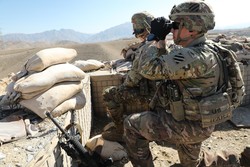 TUCKER CARLSON: American troops are still dying in Afghanistan, they have been dying in Afghanistan for 19 years. Billions are still being spent there every year by the U.S. Congress. It seems like ancient history but if you can remember back in 2012, Vice President Joe Biden, we are leaving in 2014, period. But they didn’t leave, and that was six years ago. The war continues because Washington demands that it continue.

Two weeks ago, citing anonymous reports from unnamed intelligence officials, “The New York Times” claimed that Russian agents had offered bounties to Afghan militants to kill U.S. soldiers — what they do anyway. If that sounds familiar, it is because it is. It’s the same strategy “The New York Times” used to lie us into the Iraq war 17 years ago. And like in 2003, Congress is mindlessly going along. Both Republicans and Democrats, fools, all of them, on the House Armed Services Committee have packed a new amendment into the Defense Authorization Bill to make it far harder for the president to bring American troops home permanently from Afghanistan. Maybe his most consistent policy position. End the war of it in Afghanistan, but he can’t because his generals and fools in Congress. Why is that? No one we know has spent more time in the country and knows it better than Erik Prince. He’s chairman of the Frontier Resource Group.

It seems like the president has been thwarted once again, I’m not even keeping count but the number of times he’s tried to accelerate troop withdrawal but he’s been stopped by Permanent Washington, what’s happening here?

ERIK PRINCE: He keeps going to the same people who give the same advice, it is a circular loop for 19 years. We’ve gone through 32 troop rotations now, so there is no continuity and no plan. All Washington can do is spend more money and more troops.

His first national security team actually wanted to send at 70,000 more troops to Afghanistan. He’s been trying to go the other way. Sadly, the public advice I offered the president in 2017 still applies, there is a way to rationalize U.S. presence there. If the U.S. pulls out everything completely, the Afghan government and security forces will collapse and it will be a true terrorist state at that point.

Letting veterans go back in and contract to the Afghan government and provide them the essentials that they need at a fraction of the cost and a fraction of the numbers there now. We have about four and a half thousand U.S. troops there now and more than 25,000 contractors. For less than 6,000 contractors remaining you could keep the Afghan government upright and effective, like the Flying Tigers helping to defeat Japan in World War Two.

It’s a way for the president to make good on his promise to end the U.S. war and not leave the Afghan government and the Afghan people hanging, which I think would solve everyone’s goal. The problem is, there is so much money Congress appropriates to the Pentagon, and it gets washed through all of the Congressional campaign coffers and it’s a very unhealthy cycle. The more they keep troops there — when you have the generals going on to the boards of the largest defense contractors in the country the cycle continues.

TUCKER CARLSON: You said on this show several years ago, and uniformed officers set about trashing your reputation. Some of those including the chairman of the joint chiefs of staff went to take a seat on the board of Lockheed, the defense contractor. Why do we allow that? Why do generals get to move from the Pentagon to a defense contractor?

ERIK PRINCE: That’s a law matter, not a matter of opinion, but that’s just what happens in Washington and many of the same generals and or the congressional staff go to work for defense contractors and it keeps a very unhealthy cycle… There’s nothing really to do there other than play whack a mole once in a while. It is not enough to support the Afghans. What a veteran contracted force could do is support the Afghans with Medivac… So, it’s a recipe for systemic collapse and a video of a helicopter off the top of the U.s. embassy, just like in Saigon, and I was only six when that happened and I still remember that. A veteran force going back in can prevent that from happening and still make good on the president’s promise, because we don’t need to leave U.S. troops in Afghanistan for 70 years, like some have advocated, enough of the permanent war.

Trump loses on financial records at Supreme Court, but ruling buys him time