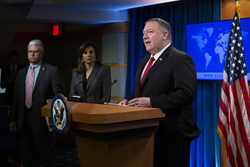 After almost a year of study, public meetings, and deliberations, the State Department’s Commission on Unalienable Rights is readying a report for public release. Worries abound on Capitol Hill, in the universities, and among NGOs. The most extravagant of the concerns is that by complying with Secretary Pompeo’s mandate — to ground America’s commitment to the promotion of human rights not only in the United States’ international obligations but also in the nation’s founding principles — the commission’s report will play into the hands of autocratic powers. The commission’s work, the critics charge, will embolden the likes of Iran, Russia, and China to redouble their appeal to their own traditions to further crush human rights.

Never mind the silly supposition that U.S. reflections on the nation’s founding principles will inspire the Islamic Republic of Iran, the Russian Federation, and the People’s Republic of China to show even greater disdain for human rights or to devise cleverer arguments for defying their obligations under international law.

Beyond naïve assumptions about the ways of autocracy, the politicians, professors, and activists demonstrate confusion about the logic of America’s 1776 Declaration of Independence and about the assumptions undergirding the United Nations’ 1948 Universal Declaration of Human Rights (UDHR). Failing to distinguish between autocratic regimes and the people over whom they rule, these experts also exhibit a regrettable moral condescension toward other nations and traditions, a condescension quite at odds with the spirit — both optimistic and realistic — that informs both the American founding and the UDHR’s drafting and approval.

So, by the logic of both camps, one must choose. You can espouse universal principles. Or you can champion particular traditions. But you cannot coherently do both. This is a false choice, though, because a variety of beliefs and practices can support a common set of universal principles.

Yes, it’s true that a preference for one’s own national traditions can be used as an excuse for majorities to oppress minorities – as it can for large nation-states to bully small nation-states. For these reasons, many human rights advocates condemn nationalism itself as inevitably unjust. Meanwhile, because the idea of universal human rights establishes a common standard for judging all nations and can be used to justify outside interference in a sovereign nation-state’s internal affairs, nationalism’s proponents portray human rights as a Trojan Horse that empowers globe-trotting diplomats, international bureaucrats, transnational judges – and sometimes coalitions of foreign troops — to impose one-size-fits-all rules on diverse nations.

But just as hard cases make bad law, focusing on the excesses to which principles can be taken distorts policy.

Accordingly, the American Declaration and the Universal Declaration both affirm the freedom and equality of all human beings. They share the belief that nation-states with their many and varied traditions are the principal political unit for securing the rights inhering in all persons. And they are inspired by the confidence that nations embodying diverse cultures and religions can, relying on their own traditions, grasp and embrace a limited number of universal principles applicable to people everywhere.

The U.S. Declaration of Independence did not insist that the principles that Americans “hold” as “self-evident” and which justified their break with Britain were in 1776 self-evident to all nations. America’s founders were grateful to the specific traditions — Biblical faith, classical political thought, and the modern tradition of freedom — that combined to form their distinctive national spirit. This inheritance trained their sight on universal principles notwithstanding the numerous ways, beginning with slavery, that Americans violated them.

At the same time, the Founders regarded as applicable to all nations the fundamental moral and political principles that the Declaration sets forth: that human beings are “endowed by their Creator with certain unalienable Rights”; “that among these are Life, Liberty, and the pursuit of Happiness”; that the purpose of government is to “secure these rights”; that government’s legitimate powers derive from “the consent of the governed”; and that when government systematically and resolutely violates the people’s rights, “it is the Right of the People to alter or to abolish it.”

In October 1787, a month after the Philadelphia convention sent the new charter of government to the states for ratification, Alexander Hamilton published the first installment of “The Federalist.” He argued that the fate of the Constitution, which sought to secure the unalienable rights the Declaration proclaimed, was pertinent to other peoples as a test of the proposition that human beings were capable of founding a nation-state grounded in universal principles. “It has been frequently remarked that it seems to have been reserved to the people of this country, by their conduct and example, to decide the important question, whether societies of men are really capable or not of establishing good government from reflection and choice, or whether they are forever destined to depend for their political constitutions on accident and force,” Hamilton wrote. “If there be any truth in the remark, the crisis at which we are arrived may with propriety be regarded as the era in which that decision is to be made; and a wrong election of the part we shall act may, in this view, deserve to be considered as the general misfortune of mankind.”

Like the Declaration of Independence, the UDHR was unprecedented. Never before had representatives from nations around the world drafted and formally agreed to a document that identified a core set of rights to serve “as a common standard of achievement for all peoples and all nations.”

Yet far from presupposing that passage in the United Nations would herald the advent of a transnational governing framework, the UDHR is based on the assumption that distinct peoples and nations would shoulder the primary responsibility for honoring its universal principles.  The drafters envisaged nations representing the world’s civilizations turning to moral, political, philosophical, and religious sources from within their particular traditions to affirm the UDHR’s core principles.

To assess the prospects for such convergence, the United Nations Educational, Scientific, and Cultural Organization (UNESCO) commissioned in 1947 a symposium comprising thinkers from around the world to address the relation between universal rights and national traditions. The essays published in 1948, under the title “Human Rights: Comments and Interpretations,” wrestled with the ultimate foundations of human rights and the diversity of cultures and nations, including essays directly discussing the Chinese, Islamic, and Hindu traditions.

In the document’s introduction, distinguished French Catholic philosopher Jacques Maritain stressed that while it was reasonable to hope that the nations of the world could recognize in common a set of basic human rights, it was unreasonable to expect agreement about the ultimate foundations of such rights. On the one hand, people were “apprehending today more clearly than heretofore, though still very imperfectly, a certain number of practical truths about their life together, on which they can reach agreement.” On the other hand, these practical truths, “in the thought of the different groups, derive, according to types of mind, philosophic and religious traditions, areas of civilization and historical experience, from widely different, and even absolutely opposed, theoretical concepts.”

The proper response, argued Maritain, was not to suppress that diversity, but to invite the nations of the world to discover within their traditions their own ways of arguing for the UDHR’s basic rights, starting with the cornerstone conviction set forth in Article 1: “All human beings are born free and equal in dignity and rights.”

The contribution to the UNESCO symposium from West-China University professor Chung-Shu Lo is especially instructive. In “Human Rights in the Chinese Tradition,” he emphasized that “the problem of human rights was seldom discussed by Chinese thinkers of the past, or at least in the same way as it was in the West.” To underscore the challenge of understanding across cultures, Lo observed that the accepted translation into Chinese of “rights” involves “two words ‘Chuan Li,’ which literally means ‘power and interest.’”

At the same time, Lo called attention to the continuities in human rights thinking between China and the West. The translation challenge “of course does not mean that the Chinese never claimed human rights or enjoyed the basic rights of man,” he wrote. “In fact, the idea of human rights developed very early in China, and the right of the people to revolt against oppressive rulers was very clearly established.”

To the extent that the Commission on Unalienable Rights honors Secretary Pompeo’s mandate, we will give not only fellow citizens but friends of freedom elsewhere a contemporary example of drawing on one’s own traditions to affirm the rights all human beings share.

Peter Berkowitz is director of the State Department’s Policy Planning Staff and executive secretary of the department’s Commission on Unalienable Rights. He is on leave from the Hoover Institution, Stanford University, where he is the Tad and Dianne Taube Senior Fellow.