The Fierce Fight Over America’s Ideals and History 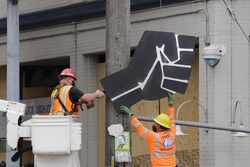 Americans do more than tolerate calls to live up to our highest ideals. We embrace them. Martin Luther King knew that when he spoke at the Lincoln Memorial in 1963. “When the architects of our republic wrote the magnificent words of the Constitution and the Declaration of Independence, they were signing a promissory note to which every American was to fall heir. This note was a promise that all men would be guaranteed the inalienable rights of life, liberty, and the pursuit of happiness. … So we have come to cash this check.”

Honoring that check brings together Americans of all political stripes. Most think, rightly, that King’s dream is the American dream. They do not believe the dream itself is a fraud, an opiate for the masses. They reject this frontal assault on America’s history and basic values. They see it every day on television and, more privately, when their children come home from school and say what they are being taught.

Most Americans think our nation’s history and aspirations are good, sometimes noble, sometimes flawed, not rotten to the core. They recognize the cruelties, such as slavery and Jim Crow, and want them taught, not glossed over. But they do not think our republic was founded to perpetuate those cruelties. Rather, they think our collective story is one of hope and progress, of confronting and overcoming the worst abuses. It is a story of expanding opportunities, sometimes too slowly but ultimately for everyone.

America’s values are grounded in the Declaration of Independence and Constitution of 1787, which are themselves outgrowths of the European Enlightenment and England’s Glorious Revolution (1688-89). The genius of the American Founding was to block the consolidation of state power in one location (the central government) or one branch of government. These arrangements envisioned a broad public sphere, where citizens could speak freely and assemble peacefully. Those arrangements were codified in the Bill of Rights and led, almost immediately, to a widening electorate: first, poor white men; then, women; and finally, descendants of enslaved Africans.

Major laws on voting rights and civil rights, passed in the mid-1960s, fulfilled the promissory note King invoked. Race, creed, religion, and gender were made irrelevant before the law; all men and women should be treated equally. (The protests after the George Floyd killing allege that blacks are still not treated equally by police. The contested issues are whether that is true and, if it is, how best to correct it.) There is universal agreement that individuals should be afforded equal opportunity to achieve the American dream, as they define it for themselves. During this time of fear, rancor, and division, it is vital to remember these shared ideals and historic achievements.

This promise of equal opportunity and legal equality has confronted two daunting obstacles, both of which are now political fault lines. The first is that not all groups have been equally successful after the legal barriers were removed. Some have remained poor, live in violent neighborhoods, raise children without fathers at home, attend bad schools, and enter the post-industrial economy poorly equipped for skilled jobs. The political questions are “Who is responsible for those failures?” and “What should be done about them?”

The second obstacle is that “equal opportunity” does not compensate for past injustices, especially racial ones. That is the crux of the dispute over reparations. The pushback is that our Western concept of politics and law is rooted in the idea that each of us is responsible, individually, for our own acts and only for them. We cannot be judged guilty for crimes committed by others 50, 100, or 200 years ago. Nor do we believe in collective guilt and group responsibility. In the Anglo-Saxon tradition, we are treated as individuals, not as members of groups and certainly not as members of inherited groups. That is an ossified caste system.

There is only one case where we might owe a debt for others’ crimes: if we somehow benefited directly from them. That is why hard-left historians like Howard Zinn and the New York Times’ 1619 Project are so insistent that American wealth is built on the original sins of slavery, dispossession of Indians, and worker exploitation. Some of that history is Marxist, but much of it is more primitive. It relies on the old folk notion that some are wealthy because others are poor. The rich stand tall only because they stand on the backs of those they exploited. That was certainly true of Southern slave owners. But it is not true of Bill Gates, Warren Buffett, or Jeff Bezos. And it wasn’t true of John D. Rockefeller or Andrew Carnegie. They vastly expanded the public’s wealth and, in the process, reaped enormous benefits for themselves.

In modern economies, wealth is built on production, not predation; on voluntary exchange, not theft and coercion. Voluntary exchange means all parties benefit. If they didn’t benefit, they wouldn’t agree to the exchange. To flourish, production and exchange require secure property and contractual rights, a stable political and legal environment, relatively free markets for workers to seek the best jobs and investors to seek the most profits, and a tax system that lets individuals and firms keep most of their earnings.

What about technological innovation, the source of so much modern wealth? That, too, is a story about the search for profits, a story about ways to incorporate scientific research into production and distribution. Pharmaceutical companies search for new medicines because they expect to profit; Walmart and FedEx create better distribution systems for the same reasons; Tesla and other car companies race to capture the lucrative market for self-driving, electric vehicles. This creativity destroys old businesses and, sadly, old livelihoods. Amazon replaced the Sears catalog and the people who worked there. The iPod replaced the Walkman, which replaced the transistor radio and phonograph. These changes can be slowed, or even stopped, if old products and processes are kept alive on artificial support. But doing so comes at a high social cost: much slower economic growth.

The leftist critique of modern America, its history, and its ideals misunderstands all these fundamental points about economics, politics, and the law. It sees America as a land of repression and racism, not hope and progress. It sees American history as a succession of shameful chapters, marked by cruelty, repression, and exclusion, not as one of gradually expanding opportunity and inclusion, marked by some awful chapters, especially for blacks and Native Americans. It sees America’s economy as one of exploitation and inequality, not as the most dynamic and productive the world has ever known. It sees America as a collection of groups, not individuals, and categorizes each group as either oppressed or oppressor, often based on their DNA.

Most radical leftists believe this noxious legacy foretells our future and will continue unabated unless American politics is fundamentally overturned. That is the shared program advanced by Bernie Sanders, Alexandria Ocasio-Cortez, and a wave of young Democratic socialists. Theirs is still a minority view, but it is not a small minority—or a shrinking one. In 2016 and again in 2020, it almost captured the Democratic Party nomination for president. Mainstream Democrats and their donors united to block them. Leaders like Nancy Pelosi, Joe Biden, Hillary Clinton, and James Clyburn are insiders, not disrupters. As professional politicians, they recognize the socialists’ growing power in their party. The principal strategy has been to push for shared goals and voice their differences in muted tones. They need to hold together their fractious party to win the White House.

To defeat them, Donald Trump and the Republicans must do more than reassert traditional American values. They must connect those values to a succinct, well-defined agenda for the next four years. That means explaining why public order and business resurgence are the best path forward and why they, not the Democrats, are the ones to ensure it.

Ultimately, the heated battle over America’s past is a battle to define its future. That better future is what Americans really care about. In November, they will vote for the candidate they think can deliver it.

Charles Lipson is the Peter B. Ritzma Professor of Political Science Emeritus at the University of Chicago, where he founded the Program on International Politics, Economics, and Security. He can be reached at [email protected].