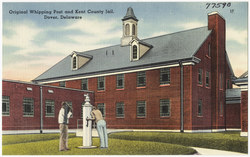 In one month, the Black Lives Matter protests that followed the killing of George Floyd in Minnesota transformed our national debate. The protests moved beyond a call for an end to white police officers killing unarmed black men apprehended for minor charges to calls for sweeping criminal justice system reform.

Contemporary symbols of police brutality are falling as well. In Philadelphia, the statue of Mayor Frank Rizzo, known for his indulgence of police brutality toward minorities, was removed out of concern for public safety. In Georgetown, Del., a monument to the state’s own peculiar institution — the whipping post — is finally being seen for the savagery it represents and will be removed.

Sociologist Robert Graham Caldwell in his 1947 book, “Red Hannah: Delaware’s Whipping Post,” chronicled Delaware’s years of meting out corporal punishment from the mid-1600s through the mid-20th century. Caldwell found that between 1900 and 1942 more than 1,600 prisoners were publicly whipped; of them, “66.2 percent were negroes, 65.8 percent were either unskilled laborers or farm hands.” For those four decades, African Americans comprised just 16% of the state’s population.

While millions of Americans saw police brutality inflicted upon George Floyd for allegedly passing a counterfeit $20 bill, Delawareans for over 200 years watched prisoners whipped for “theft of property of very little value … less than $10,” or for simply stealing chickens. Caldwell’s research and data shattered myths held by whipping posts proponents. He found the post did not deter crime, or reduce recidivism and incarceration.

Delaware reminded free people of color that brutality and white supremacy still reigned seven months after the Civil War ended, when an African American woman was convicted of larceny. Sarah E. Robinson was “whipped with twenty lashes” and sold for five cents into servitude for seven years.

The whipping posts and public floggings in each of Delaware’s three counties sullied the state’s reputation nationwide for decades. In 1912, the San Francisco Star took Delaware to task for whipping prisoners. “In a cruelty that is of the past, she stands alone, and is ashamed in her loneliness. She should awake … and move forward among those who happily have discarded the ways of savagery. As it is, she earns not only startled wonder, but contempt as well.”

In 1931, playwright George Bernard Shaw wrote in the New York Times that “in America, the frightfully long periods of solitary confinement and Delaware’s flogging suggest the civilization of fiends rather than human beings.”

In 1935, the warden of the New Castle County Workhouse, Elmer Leach, described the whipping post as a “barbaric relic of the past.” The last public whipping took place on June 16, 1952. It wasn’t until 1972 that Republican Gov. Russell Peterson and the state legislature finally removed use of the whipping post from the Delaware criminal code.

In 1993, the Georgetown Historical Society in Delaware “dedicated” a whipping post for public display just off the town square. The text on the marker for the post is misleading. While it is accurate on the number of lashes for larceny, it states: “During the 1840s many people thought the laws concerning the whipping post should be looked at.” In reality, Delawareans fought to abolish the whipping post for over 150 years.

Dover resident Reba Hollingsworth remembers the Kent County whipping she witnessed in the late 1930s. “They whipped people on Saturdays, generally,” said the 93-year-old woman of color. She said a white man convicted of stealing chickens “was already chained when I got there.” Her most distinct memory: “There was a big crowd. … They were quiet. … I remember the sound of the lash.” When asked about the whipping post and Confederate statues, the former school counselor said, “Whipping posts and Confederate monuments should be taken out of the public square, and so we do not forget the history, put into museums.”

George Floyd’s death, countless other deaths from over-policing, and the whipping post in Georgetown remind all Americans how unequal treatment under the law isn’t a new trend; it’s been around for centuries. That’s why Delaware’s Division of Historical & Cultural Affairs should work with the state Board of Education to review how Delaware schools teach race relations, and develop new lesson plans pertaining to corporal punishment, criminal justice reform, and “Red Hannah.”

On July 1, the whipping post will finally be removed from public view in Georgetown. “Now is the time for doing this,” said Tim Slavin, director of the Division of Historical & Cultural Affairs. “And shame on us for not doing it sooner.”

Correction: An earlier version of this article mistakenly said the last whipping in Sussex County took place in 1942. In fact, it occurred in 1950.

Greg Wilson, has worked on Capitol Hill, political campaigns, and in video production and strategic communications. Living in Delaware, he’s been a fair-lending advocate, grass-roots organizer and a consultant utilizing increased community reinvestment for improving social determinants of health.