Black Lives Matter NY President: Crime Needs To Be Looked At As A Health Issue, Not A Police Issue | Video 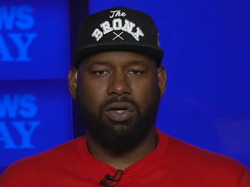 WALLACE: Protesters in American streets are calling for the country to address our racial tensions, both current inequities and contentious symbols of America’s past. But how to do that is a key question.

Mr. Newsome, you created quite a stir this week when you spoke with my colleague Martha MacCallum. Let’s take a look at what you said.

HAWK NEWSOME, BLACK LIVES MATTER, GREATER NEW YORK: If this country doesn’t give us what we want, then we will burn down this system and replace it, all right? And I could be speaking figuratively, I could be speaking literally. It’s a matter of interpretation.

WALLACE: Afterwards, President Trump tweeted his reaction to your statement.

This is treason, sedition, insurrection.

Question, sir, what you accomplish with rhetoric like that? How do you think that helps?

NEWSOME: Well, here’s the thing: a lot of people don’t understand how the streets or the people feel. I have an in-depth knowledge for this, I live in the Bronx, I live amongst the people.

So, it’s not like I’m sitting here pushing a button or anyone can push that button. But if people keep seeing these images of their babies, of their relatives, of black people being killed, they keep dealing with financial inequality and inequity, and it reaches a point of frustration, then people lash out.

This is a matter of inevitability that people will lash out because they’re feeling like they’re backed into a corner.

WALLACE: But just two years ago, back in 2018, you gave a Ted Talk in which you preached nonviolence and talked about how during the riots in Baltimore over the death of Freddie Gray, you tried to stop the violence. I want to play clip of you from just two years ago.

WALLACE: That man wouldn’t have talked about working to burn down the system. What happened?

NEWSOME: Well, what you have to understand is overtime — how about this? I’m not encouraging people to go out and hurt other people. That’s not what I’m promoting.

The same way we looked at heroin addiction when it was only black people as ‘tough on drugs, war on crime.’ We have — and when it became white people, we looked at it as a public health crisis, as something that needs to be treated.

That’s the way we need to look at crime, OK? You think about police. Over 80 percent of the calls are not violent felonies. Therefore, we should really look and see why police are being called.

Look at the causes of why people are committing crimes. They are desperate. They’re poor. They’re undereducated and they are left out to dry but this American system of government.

So if you want to decrease crime, you don’t hire police to come in and arrest everybody and brutalize people. If you want to cure crime, then you must go to the source. You must invest in people, you must give people jobs.

You must make people employable. Places with the highest murder rates have the highest rates of unemployment.

NEWSOME: — that this country spends on police.

WALLACE: But. Mr. Newsome, let me pick up on this. We’re going to have Congresswoman Eleanor Holmes Norton on next, who’s been a leader in the civil rights movement for years. She’s working in Congress right now to try to pass policing legislation.

She says if you want to see a statue removed, you don’t tear it down. You go through the proper legal channels, whether it’s Congress or the city council.

There has been a split in the civil rights movement, the African-American community for at least a half a century now between Malcolm X and by any means necessary on the one hand, and Martin Luther King and working through the system on the other.

Didn’t MLK get a lot more done in a practical sense?

NEWSOME: I believe that Dr. Martin Luther King Jr. was a brilliant strategist, especially in the form of media savvy. But what we have to understand is, black people do not trust politicians. They don’t trust black — they don’t trust Democrats, they don’t trust Republicans.

Black people also have a problem with the government overstepping its bounds. The biggest manifestation of that is policing.

So if you want to make government smaller, then you address police on that scale.

If you talk about the rift in the civil rights movement, our elders, a lot of them have been bought (ph) off by the Democratic establishment, right? And they pretty much go with the flow of the Democratic establishment. And what you have to understand is, 50 percent — maybe sometime 60 percent of the people out there protesting are young white people, and you want to write them off and call them Antifa or this or that.

You look at how this country is beholden to corporations and people feel betrayed.