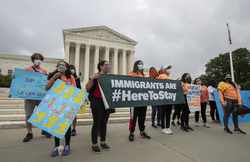 Over the course of just three days last week, the Supreme Court ruled that employers cannot discriminate against individuals based on their sexual orientation or identity, and that the Trump administration could not proceed with immediately dismantling the federal DACA program as planned. This week, in a lopsided 7-2 decision, the court held that asylum seekers are barred from challenging their petition denials in federal court.

Many observers were surprised at the disposition of these cases, given the apparent ideological makeup of the current court. But it’s not surprising if one sees these decisions for what they are — efforts to solidify the court’s institutional standing in the eyes of the public, as well bolster the interdependent relationship it has with members of the political branches.

Since Justice Antonin Scalia’s passing in 2016, the court has been center stage. We have witnessed Senate Republicans stymie President Obama’s nomination of Merrick Garland. Then we were amazed by the subsequent swift confirmation of Neil Gorsuch after the Senate changed its filibuster procedural rules.  And we had front row seats during Brett Kavanaugh’s drawn-out confirmation battle, which included the intense drama of addressing sexual assault allegations brought against him by Christine Blasey Ford.

These noteworthy events, occurring back to back to back in such a relatively short period, elicited warnings from the left that the court was lost for a generation, given its resulting ideological composition. Scholars, for that matter, were left wondering whether these events would damage the court’s longstanding and traditionally robust institutional legitimacy.

Institutional legitimacy is the Supreme Court’s most valuable currency, since it lacks any sort of meaningful enforcement mechanism to see its decisions through. The court relies on other political actors to respect and enforce its holdings — even when those opinions may be unpopular — and it’s the public perception of the court as a legitimate institution that allows for our political system to continue to function.

It’s precisely because of the court’s perceived legitimacy that it is able to survive plainly political decisions such as Bush v. Gore.

There is little reason to believe that all nine of the court’s justices care about institutional legitimacy to the same degree, but the one who likely cares the most is the chief justice. And time and time again, we’ve witnessed John Roberts behave in ways consistent with this assumption, and his votes last week in Bostock v. Clayton County and in DHS v. Regents of the University of California are prime examples of his continuing concern for the court’s standing in the face of substantial public scrutiny.

But these opinions, viewed favorably by a majority of Americans, according to polls, do more than protect the court from excessive partisan backlash. They also provide cover to members of Congress, who might otherwise have been faced with defending their ideological positions on these matters in a general election year.

The public’s support for LGBTQ rights and DACA is at an all-time high, so it’s not surprising that numerous Republican senators were quick to comment on these decisions, stating that they accepted the court’s decisions as final. Even President Trump, when remarking on equal employment rights for LGBTQ individuals, said that the justices had ruled and he will “live with their decision,” referring to Justice Gorsuch’s opinion as “very powerful.”  A week later, the Trump administration was handed a victory regarding its preferred asylum procedure when Justices Ruth Bader Ginsburg and Stephen Breyer concurred with the court’s traditionally conservative bloc.

This conciliatory behavior may seem out of place in today’s highly politicized environment, but the fact is Congress members have been passing the buck to the other branches of government for quite some time, afraid of making affirmative votes on matters that could potentially harm them at the ballot box.

It has been much more expedient for Congress to allow these delicate issues to be handled by the executive branch and its associated agencies. LGBTQ employment rights, DACA negotiations, and refugee protections have been stalled in Congress for years without much progress, and the Supreme Court’s decisions this week allow Congress to do more than just pass the buck — it avoids the buck altogether.

Of course, the court’s term has yet to come to a close, and highly salient, politicized issues remain on its docket. In the coming weeks, the court will release holdings on states’ restrictive abortion regulations and whether President Trump must reveal his financial documents and tax records to House investigators.

How the chief justice navigates these remaining matters will give us a glimpse of how he plans to embrace his unexpected, newfound role as the court’s swing vote.