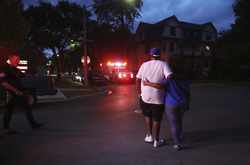 Mekhi James, just 3 years old, is beyond the reach of your virtue signaling and your politics now.

That little boy slipped into Chicago’s never-ending river of violence as have thousands before him, a river that numbs the city even as it washes the names of the dead from common memory.

The toddler was killed in Chicago’s street gang wars, one of more than 100 people shot over the weekend in the city, with 12 of those shot younger than 18. Included among the dead were two boys coming home after getting candy at a neighborhood store, a 13-year-old girl and Mekhi James.

The spike in violence in Chicago and other Democratic Party-controlled big cities, from New York to Los Angeles, is a function of street gangs, drug wars and politics. The elected social justice warriors demand little or no bail for the violent who are released back onto the streets. Broken public school systems serve power interests, not the poor. Tax policy kills business and job opportunities in troubled neighborhoods.

In urban America, Democrats have no competition. And all that matters to the political class is counting the votes.

Carried away in that river of violence, Mekhi James slips past your public anguish and your hand-wringing about why “something” isn’t done.

He’s indifferent to your “hate has no home here” signs now. He’s immune to your good intentions and tweets about that Minneapolis police murder of George Floyd.

The river takes him beyond your self-indulgent sentimentality that mourns the baby’s death but allows for the continuation of policy that wreaks havoc upon the poor, election year after election year.

“A line was crossed,” said a broken-hearted Rev. Ira Acree of Greater St. John Bible Church on the West Side to a gathering of angry and distressed mourners from the neighborhood. “This 3-year-old baby lost his life. … We say Black lives matter, but we’re here to say Black baby lives matter more.”

Of course they should matter. But do they really matter?

Chicago is a street gang war zone over corners and drug sales. Not all the dead are from the street gang wars. But many are, and we don’t dare admit it. Because if we did, we might realize that in Chicago, the violence is out of control.

If we really cared about these victims and their memories, we’d have the decency to call what happened to them by its real name: gang wars.

But instead we call it “gun violence.” Why use antiseptic weasel words? Blaming a gun makes things a lot easier on the politicians, and on their wealthy liberal suburban supporters with the “hate has no home here” signs on their front lawns.

There are many guns in the suburbs and in rural areas. But people there aren’t slaughtering one another.

The reason there is violence in some Black neighborhoods is the drug trade. And Black street gangs aren’t the ones bringing drugs up from Mexico. The importing is handled by the Mexican drug cartels, which have made Chicago a hub.

So, do we really care about Black babies like Mekhi James?

If he hadn’t been shot by an assassin’s bullet police say was meant for his father, chances are he’d have been ready for kindergarten in a few years and might have attended the Chicago Public Schools.

Woke world journalism and politics are full of anger over institutional racism. But aren’t the broken urban public school systems themselves institutionally racist? Yes. And they’ve had decades to prove it.

Public school systems are political systems. The one in Chicago really doesn’t serve the poor as much as other interests.

Like the Chicago Teachers Union, which brings votes and angry demonstrators on demand; and school bureaucrats who historically are Democratic political patronage functionaries; and politically connected vendors who sell goods and services to the schools.

This iron triangle of interests is served first. They fight any effort that threatens their monopoly and gives minority families an alternative, particularly charter schools and school voucher programs. And minority families and students? They’re the political cash cows of the system. But they’re served last, by design.

If Mekhi James lived longer, he might have played on Chicago streets where violent and repeat gun offenders are often arrested but released back onto those same streets, often with little or no bail, to prey on and in their neighborhoods. Democrat social justice warriors are quite proud of this, including Cook County State’s Attorney Kim Foxx, her patron, Cook County Board President Toni Preckwinkle, and Cook County Chief Judge Tim Evans.

I’ve written about this several times, from a column about a robber who slammed a young teacher to the ground in Lincoln Park for her cellphone and only had to post $100 bail, to a convicted felon arrested with a gun. His bail included electronic home monitoring. He was later arrested while driving; his electronic home monitoring device was plugged into a portable power pack, allowing him to roll through the city, freely.

In Cook County, the political class allows electronic home monitoring to be used for those arrested for murder, attempted murder, kidnapping, unlawful use of a weapon by a felon and rape.

“There are too many violent offenders not in jail, or on electronic home monitoring, which no one is really monitoring,” said Chicago police Superintendent David Brown. “We need violent felons to stay in jail longer.”

But they don’t. The politics won’t allow it.

And Chicago’s river of violence sweeps another child away.