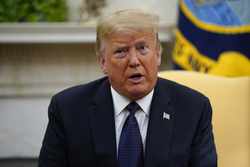 Election Day is still months away, but the current polling is painting a very bleak picture of President Donald Trump’s odds of reelection. On Wednesday morning, the New York Times released its latest national poll conducted in connection with Sienna College and it showed presumptive Democratic nominee Joe Biden with a massive 50-36 lead over Trump. As Nate Cohn, the Times’s polling guru, noted in discussion of the poll on Twitter, that lead is so large it’s essentially invulnerable to assumptions about the demographic composition of turnout.