The New Normal on Voting and Education 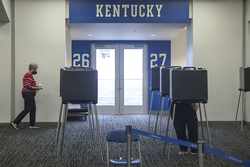 As states and local governments emerge from COVID-19 lockdowns, they are defining new normals in the face of budget shortfalls and a rising demand for police reform. In particular, prospective changes are under consideration regarding the voting process and in K-12 schools when many of them reopen later this year.

Because of the pandemic, a majority of voters participating in this year’s primary elections did so by mail. This trend is likely to continue in the November elections, said Wendy Underhill, director of elections and redistricting for the National Conference of State Legislators (NCSL).

“More people will vote by mail than ever before,” Underhill said. “Twenty-five percent of voters cast ballots by mail in the 2016 presidential election. This time it could be over 50%.”

This could be a conservative estimate if there’s a major surge of the coronavirus in the fall that forces states into new lockdowns. Many primaries were postponed this year because people were reluctant to vote in person at even the most hygienic of polling places. In some states there was also a shortage of polling places and trained personnel.

According to Milwaukee officials, six voters and one poll worker contracted the coronavirus because of in-person voting in the April 7 Wisconsin primary. Five states — Colorado, Oregon, Utah and Washington and, starting this year, Hawaii — vote by mail. These so-called “all mail” states allow in-person voting on Election Day; the percentage of voters who vote by mail is in the high 90s.

California Gov. Gavin Newsom (D) has directed that ballots be mailed to every registered voter in the state for the Nov. 3 election. Mail voting has steadily increased in the Golden State to a high of 67% in the 2018 election and it is expected to be higher this year.

In Michigan, Secretary of State Jocelyn Benson (D) has said she will send mail ballots to every registered voter for both the Aug. 4 primary and the Nov. 3 general election. Only 25% of Michigan voters cast ballots by mail in 2018.

California and Michigan are among 29 states with “no excuse” systems in which voters can obtain a mail ballot in any election upon request without having to give a reason. The six battleground states political analysts see as most likely to determine the outcome of the presidential election — Arizona, Florida, Michigan, North Carolina, Pennsylvania and Wisconsin — are all “no excuse” states.

Mail voting in these six states varied widely in the 2018 election, from a high of 77% in Arizona to a low of 2% in North Carolina. Sixteen states require applicants for a mail ballot to give a reason for voting by mail. Illness, disability or absence from home are considered legitimate reasons in all these states. Many of these states also excuse older voters and college students studying outside their counties from voting in person.

Recent public opinion surveys by Gallup (64%) and The Hill (67%) show strong public support for mail voting. Support is stronger among Democrats and independents than among Republicans, largely because President Trump claims that mail voting is riddled with fraud.

Another myth about mail voting is that it favors Democrats. President Trump declared on March 30 on “Fox & Friends” that under an all-mail voting system “you’d never have a Republican elected in this country again.”

But only 17 days earlier Republican Mike Garcia defeated Democrat Christy Smith in an all-mail special election in California’s 25th Congressional District. It was the first time in 22 years a Republican had ousted a Democratic member of Congress in California.

Smith, who had defeated a Republican incumbent by eight percentage points in 2018, lost to Garcia by nearly 10 percentage points. More broadly, a Stanford paper — of which political scientist Andrew Hall was the principal author — found recently in studies of elections in California, Utah and Washington that mail voting does not favor one party over the other.

While most assessments of mail voting are positive, voting analysts are concerned about in-person voting in the wake of the breakdown of new high-tech voting machines in the Georgia primary on June 9. Partisans blame each other for the malfunctions, but there is agreement that the system needs fixing.

In 2019 another high-tech voting system made by a different company failed in Northampton County, Pa., in which the Democratic candidate for a local judgeship received just 164 votes out of 55,000 that were cast. Myrna Perez, director of the Brennan Center’s voting rights and elections program, called the Georgia breakdown a “giant warning siren” for November.

While voters may feel more comfortable staying home and mailing in their ballots, millions of their children will be returning to school for the fall semester

Most of the nation’s 50.8 million public school students and 5.8 million private school students have studied remotely during the pandemic with mixed results. Two studies cited by the Los Angeles Times found that most remote education has not measured up to in-person schooling.

Rules and procedures will be different at many reopened schools, where students will have their body temperatures checked daily. Classrooms are expected to have half as many students, desks will face forward, supplies will not be shared, masks will be worn and social distances maintained. Many schools will also ban or limit assemblies, field trips and football games.

These recommendations, similar to those used in other states with high pupil density, were contained in a 62-page document sent to California’s 10,000 schools by State Superintendent of Public Instruction Tony Thurmond. There was immediate pushback on this checklist from school districts that say they do not have the necessary staff to maintain social distancing, especially in a year when schools are facing pandemic-induced budget shortfalls.

Pamela Kahn, president of the California School Nurses Association, told the website CalMatters that the state’s recommendations for face coverings and temperature checks are “absolutely not feasible.”

Half of the state’s school districts do not have school nurses, she said. In Orange County, where Kahn works, the ratio of nurses to pupils ranges from one nurse to every 1,000 pupils to one for every 10,000.

But there appears to be broad support for a “hybrid learning” plan that has been proposed in California, New York and other states. Students would be grouped into two cohorts, one of which would receive in-person instruction at school while the other learned at home. After a specified number of days, the two cohorts would switch. The reduced number of pupils at schools would enable them to be physically distanced from one another.

Laura Capps is president of the Santa Barbara Unified School District, which is poised to adopt such a hybrid system. She said she hopes the system would improve personalized teaching since members of the at-home cohort would be able to learn at their own pace.

In addition to dealing with consequences of the pandemic, schools will be affected by the nationwide call for police reform in the wake of the killing of George Floyd while in the custody of Minneapolis police.

The Santa Barbara school district, among others, is expanding its ethics studies programs and making ethnic studies a requirement for high school graduation. School districts in Denver, Portland and Seattle have cut ties with police, who will no longer provide security for schools in these cities. The possibility of cutting ties is also under discussion in several of the nation’s major school districts, including Los Angeles, Chicago and New York.

In the new normal of education, much — perhaps too much — is being asked of the nation’s teachers, who in addition to teaching the usual subjects will have to instruct their pupils about racial inequity and climate change. It’s a tall order.

Lou Cannon is editorial adviser and columnist for State Net Capitol Journal, a Lexis-Nexis publication. He previously worked for The Washington Post and is author of “President Reagan: The Role of a Lifetime.”