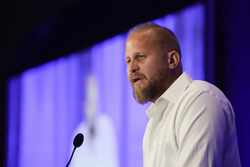 After attendance projections for President Trump’s rally in Tulsa, Okla., fell flat Saturday night, top Trump allies expressed frustration with his campaign manager, Brad Parscale, and many high-level advisers pressed for a reshuffling of the reelection team, according to sources close to the campaign.

Deep concerns started brewing about the rally turnout in the days leading up to it, with one Trump insider telling RealClearPolitics on Thursday that campaign staffers were complaining Parscale was inexplicably exaggerating the size of the expected crowd. Parscale had boasted on social media that 800,000 people had signed up for tickets.

At the time, there was no mention of any organized effort by young social media users or other malign actors to embarrass the campaign by urging followers to register for the rally and then not show up, as some claimed they had on Twitter during and after the event.

“That place better be packed outside because they floated that [800,000] number,” one former Trump campaign adviser told RealClearPolitics late last week.

Shortly before the rally, the campaign projected the crowd would be closer to 100,000. Since the BOK Center itself holds only 19,000, an outdoor area was built to hold the overflow. But after hoped-for crowds failed to materialize, Trump and Vice President Mike Pence hastily scuttled planned pre-rally speeches at the outdoor stage, and it was dismantled.

The official attendance was put at 6,200 by Tulsa officials, while the Trump campaign insists 12,000 were in the arena.

After the rally, the source said several campaign staffers expressed deep distrust in the reliability of Parscale’s digital operation, which he walls off from other staff. “You can’t grow your base by emailing and texting people – for heck sake, it annoys loyalists,” the source said.

Even before the rally, there was a push inside the campaign to elevate the role of Jason Miller, who was Trump’s communications director in 2016. Two weeks ago, Miller rejoined the campaign as a senior adviser, and some felt he should replace Parscale, the sources said.

“This is a real possibility, not speculation – it’s being discussed internally,” one source said.

During and immediately after the rally, Parscale went on Twitter to blame Black Lives Matter protesters for cutting off access to the arena. He issued a press release Sunday morning blaming the decreased attendance on the media for labeling the rally a coronavirus super-spreader and hyping fears of violent protests. The statement ended with a thinly veiled threat to pull the credentials of some reporters for the rallies over what he described as blatant anti-Trump bias.

“For the media to now celebrate the fear that they helped create is disgusting, but typical,” Parscale said in the statement. “And it makes us wonder why we bother credentialing media for events when don’t do their jobs as professionals.”

The Trump campaign on Monday tried to stamp out talk of a major campaign team shake-up in the offing that would remove Parscale from the top campaign leadership post. Asked whether President Trump has full confidence in Parscale to continue in the role, Trump 2020 Communications Director Tim Murtaugh lavished praise on his boss.

“Brad has built an amazing team and is doing a great job,” Murtaugh told RealClearPolitics. “He has a strong, 10-year relationship with the president and the Trump family.” Reached online, Miller told RCP that reports that he might replace Parscale are “fake news.” “Brad has built an amazing team, and the Biden campaign is in full meltdown trying to explain why Trump had 11,990 more supporters than Biden did at their last event.”

Miller was referring to a major economic address Biden delivered in the Philadelphia suburbs last week, which the New York Times described as strangely quiet and uninspiring. The report said “about 20 handpicked local officials, small-business owners and reporters sat in folding chairs, each placed within a large white circle taped on the floor of a recreation center to maintain or encourage social distancing.”

“A few attendees whispered to each other as photographers quietly chatted,” the report said. “You could hear the clack of typing echoing across the room. The silence was striking.”

Murtaugh blamed Saturday’s less-than-anticipated turnout for Trump on “a massive media push to crush the Trump rally.”  Still, he said, “12,000 bravely showed up.”

“The media had spent more than a week telling Americans that a Trump rally was a dangerous place to be because of the coronavirus and because of protesters,” he said. “The mayor of Tulsa issued a statement saying he had information that outside agitators were coming to make trouble and briefly instituted a curfew. Businesses downtown boarded up their windows.”

White House press secretary Kayleigh McEnany discounted reports that Trump is angry at Parscale over the rally’s attendance and was upset over the turnout. “The president was very pleased with the rally,” she told reporters Monday. “These media reports that he was somehow furious on the plane – there is no grounding [of that] in fact,” she said, noting that she was with him after the rally on Marine One and had talked to another senior aide, Dan Scavino, who was in the presidential motorcade with Trump after the rally. “He was very pleased with how the rally went . . .  he was very energized,” she said.

“The enthusiasm is with President Trump,” Murtaugh said. “As of Monday morning, more than 11.3 million people had watched the president’s speech on our digital platforms – by far a record. There is an enthusiasm gap – it is real and it is wide.”