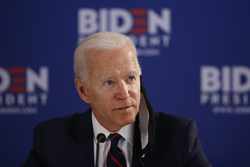 When President Trump got a good look at the coronavirus in late January, and listened to the opening choruses of the Democratic attack on him as “anti-science,” he evidently concluded there was nothing for it but a two to three month shut-down followed by a declaration of partial victory in the public health crisis along with an exhortation to a massive and almost instantaneous economic renaissance coming to a head in late October.

END_OF_DOCUMENT_TOKEN_TO_BE_REPLACED

Coronavirus has "brought this nation to its knees," CDC director says