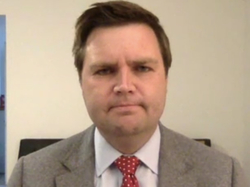 J.D. Vance, author of “Hillbilly Elegy,” appeared on Tucker Carlson’s FOX News show to discuss politicians dividing people by race and the protests across the country.

TUCKER CARLSON, FOX NEWS: JD Vance is the author of “Hillbilly Elegy.” He joins us tonight. JD, I can’t imagine that one in a thousand Americans seeks to divide the population by race. It’s the cruelest and longest lasting sin you could commit, I think in a country and yet clearly there are people who are intentionally trying to do that. Why?

JD VANCE, AUTHOR: Well, I think that you have to ask yourself who benefits from a lot of this tension and a lot of this division. If you think about a business, black owned or white owned that was destroyed in a riot over the last few weeks, who gets richer from that?

We know that Amazon has a little bit more market share. And so Jeff Bezos makes a little bit more money. If you think about what prevents new businesses from coming online and competing with those mega corporations that rule our financial world, well, every time a small business gets denied for a loan, every time a small business goes out of business, that’s obviously good for the folks who run our corporate culture.

And at the end of the day, what we’re doing is creating an entire narrative that’s dividing the country instead of actually causing middle and working class people to unify and to try to convince through political means others to share power with them.

CARLSON: Do you think that explanation might explain why the turmoil we’re watching has been largely funded by corporate America?

VANCE: I think that’s a huge part of it, Tucker, and one of the weirdest things, you know, people on the left right now act like they’re on the side of the oppressed. They like to think that they’re standing up for the little guy, they’re standing up for working people, but on every single one of these major issues, if you look at the big Supreme Court cases that have come down the line in the past few days. You look at what’s happening with the protests.

You know, if I was a member of a political movement that stood up for working people and found myself every single time on the side of Amazon, on the side of Apple, on the side of Google, I might ask myself, if I’ve actually chosen the right allies, and what it says about me, but unfortunately, too many folks on the left just aren’t doing that.

CARLSON: Why are Republicans playing along with this? I mean, they seem to think — I’ve been thinking of this all day that this is some kind of policy debate that can be won by passing some stupid Bill in the Congress. The people — they’re arguing against see this as a revolution that will replace our current system with a new one. Why is that a hard concept for elected Republicans to grasp?

VANCE: Well, if you step back a little bit from our current debates, one of the things that’s pretty obvious is that the Republican Party has been for far too long in the pocket of major corporate interests. That’s true in the think tank world in D.C., it’s true for a lot of major Republican politicians.

And I think the Republicans have just so forgotten that there are real economic, real social challenges in this country that needs to be solved, that they’re comfortable with just doing whatever the mainstream media says that they should be doing, instead of actually fighting back in a real and substantive way.

Really, the story of the past 30 or 40 years of American politics, unfortunately, is that in their own different ways, the left and the right have both found themselves effectively preaching that they’re standing up for the middle class, when in reality, they’re just standing up for corporate interests.

And so unfortunately, I think the answer to your question is Republicans have just gotten used to not solving real problems, to not legislating, to not doing the things that they’re supposed to be doing as political leaders. And this is almost the most important point here, Tucker, if you look at the average American, black, white, brown, whatever, they’re very sensible.

They want common sense solutions. They recognize that something is pretty broken about our current system. It’s fundamentally a problem of leadership that we’re not talking about the biggest issues that confront us as a country.

And so, you know, unfortunately, that falls on Republicans just as much as it does with Democrats.

CARLSON: They’re not defending their voters or any American. It’s can’t last, I would say. JD Vance, thank you for your insightful analysis of that.