The ACLU’s ‘Death Star’ Client in Its Title IX Lawsuit 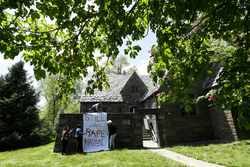 The American Civil Liberties Union has been deservedly criticized for its May 14 lawsuit indirectly attacking the civil liberties of students accused of sexual assault, who have since 2011 been subjected to grotesquely unfair campus proceedings that effectively presume their guilt.

It’s true, as the ACLU claims — after years of shameful silence during the Obama administration campaign to force (all too willing) universities to rig their processes against accused males – that its lawsuit against the Betsy DeVos Education Department does not directly attack all of the procedural-fairness reforms in its recently adopted Title IX rules.

But the lawsuit does insist that accused students be found guilty even if the evidence of innocence is almost as strong as the evidence of guilt. It also argues for a far more sweeping definition of sexual harassment than the one in the DeVos regulations (which parallels the definition adopted by the Supreme Court). And its central legal theory — that it was illegal for the Education Department to make the rules for universities processing student-on-student claims of sexual harassment and assault less accuser-friendly than those for race-based, national origin-based, and disability-based harassment and assault — would logically lead to invalidation of all of the new rules.

Other writers have detailed the above points and criticized three other legal challenges so far to the new regulations filed by a total of 19 Democratic state attorneys general, along with the National Women’s Law Center, which are even more sweeping than the ACLU’s lawsuit.

The ACLU filed its complaint on behalf of four organizations: Know Your IX, Council of Parent Attorneys and Advocates Inc., Girls for Gender Equity, and Stop Sexual Assault in Schools. The latter three groups have played a minimal, or nonexistent, role in the contentious debate about due process and campus sexual assault. Know Your IX, however, was dubbed the “death star” by one lawyer who frequently represents accused students. As such, it represents an odd partner to a civil liberties organization.

Know Your IX was co-founded by Amherst graduate Dana Bolger and Yale graduate Alexandra Brodsky. (Both claimed that their institutions, neither of which could be deemed a hotbed of men’s rights activism, had mishandled their claims of sexual assault.) The group was one of several active during the Obama years arguing that campus Title IX procedures — which routinely denied accused students basic rights, such as access to evidence or cross-examination — were actually biased against accusers.

Nearly 600 lawsuits from accused students — generating more than 170 favorable rulings in court, and more than 100 pre-decision settlements — exposed the folly of this portrayal of campus tribunals. And in recent years, most of the Obama-era organizations have fallen by the wayside. Know Your IX, however, soldiers on, funded by Advocates for Youth, with a staff of nearly 20. None of its current employees identify as male.

The Know Your IX website proclaims that “sexual and dating violence are manifestations of systemic gender oppression, which cannot be separated from all other forms of oppression, including but not limited to imperialism, racism, classism, homophobia, transphobia, and ableism.” Its Twitter feed is similarly filled with paeans to the latest trends in intersectionality-based talking points.

While linking Title IX tribunals to imperialism seems like a stretch, misogyny remains a powerful force in American society. But the data makes university undergraduate populations — the focus of Know Your IX’s efforts — an unusual example for demonstrating “systemic gender oppression.” Women comprise about 56% of student bodies. Many universities feature female-only scholarships, programs, student and faculty awards, STEM camps, gym hours, and other opportunities that are off-limits to males. (These might, or might not, be welcome programs, but their existence surely cuts against a “systemic gender oppression” interpretation of college life.) And while any amount of sexual violence on campus is deplorable, the most comprehensive data suggests that about one in 40 women is sexually assaulted in college, not the one in five suggested by various dubious surveys.

To co-founder Bolger, however, male students are inherently dangerous. In 2015, she told Yahoo News that the four Vanderbilt football players who collaborated in the horrifying rape of one player’s passed-out girlfriend were typical of male undergraduates, “particularly [at] ‘elite’ institutions.” She also stereotyped male students as having “a certain arrogance and entitlement, whether to a desired grade in a classroom, or to women’s bodies.” At the same time, Bolger portrayed the Title IX process as designed, at least in part, to achieve the “justice” that criminal trials deny in rape cases. During her time helming Know Your IX, she maintained that the “criminal justice process revictimizes rape survivors” because “police disbelieve victims” and “juries buy into the rape myths that saturate our society and acquit perpetrators.” But if the Title IX system substitutes for the criminal justice system, any argument against meaningful procedural protections for the accused is unsustainable.

For the most part, the organization has downplayed such extreme rhetoric. Showing a political savvy that other accusers’ rights activists lacked, Know Your IX presents the group’s agenda as seemingly balanced. It purports to reject “the notion that justice for survivors is in tension with fair procedural protections for accused students,” and therefore commits to “fight for fair processes both for survivors, and for accused students.” These are admirable goals, though scant evidence exists Know Your IX has ever implemented them. The organization has neither filed an amicus brief nor publicly supported even one accused student lawsuit, despite myriad complaints detailing obviously unfair procedures. Bolger even rejoiced at the expulsion of an Amherst College student victimized by the most procedurally unfair of these campus processes. (The college later settled a lawsuit filed by the student.) Co-founder Brodsky even unconvincingly maintained that Obama-era policies should be interpreted as favorable to the due process rights of accused students.

The differing approaches the ACLU and Know Your IX took to comments addressing the draft regulations further highlight the awkward alignment between the two organizations. The ACLU, while previewing many of the troubling themes from its later lawsuit, at least accurately described the relevant case law. Know Your IX, by contrast, misrepresented two of the most important federal court wins for accused students, on which the DeVos rules were partly based. In one passage, Know Your IX suggested that the 2018 decision of the Sixth Circuit U.S. Court of Appeals, in Doe v. Baum, did not say what it plainly held: that a public university “must give the accused student or his agent an opportunity to cross-examine the accuser and adverse witnesses in the presence of a neutral fact-finder” in all cases in which credibility is an issue.

In another section of its comment, Know Your IX wrongly asserted that the Education Department’s presumption that it is sex discrimination for a school to use unfair procedures to impose discipline had been rejected by the courts. False. The comment relied on a federal district court decision that had already been overruled by the Second Circuit Court of Appeals. That court declared in 2016 that a university “that adopts, even temporarily, a policy of bias favoring one sex over another in a disciplinary dispute … has practiced sex discrimination.”

In one key area, Know Your IX hasn’t had to reverse earlier practice as part of its new alliance with the ACLU — though here its position reflects a fundamental misunderstanding of the Title IX disciplinary process. The lawsuit faults the regulations for giving schools the choice of using either the preponderance of the evidence standard (50.01%) or the clear and convincing standard (around 75%) in determining an accused student’s guilt. Colleges have had this choice since 2017 and none has elected to use the higher standard, so this option is more rhetorical than real.

In its comment, Know Your IX argued that using the clear and convincing standard — which many due process advocates see as critical in the Title IX process because university procedures are so tilted against the accused in so many other ways — was “lopsided.” It suggested that the harm done to an innocent male who is wrongly found to be a rapist is no greater than the harm done to a rape victim whose assailant is wrongly found not guilty.

Know Your IX’s argument might have made sense if schools primarily used restorative justice programs designed to address allegations of sexual assault in a non-punitive way. Yet the Title IX disciplinary process is just that — a disciplinary process. The only person whom the college can punish as part of the process is the accused student. The idea that procedural protections for the accused in such a situation are “lopsided” is curious.

Few, if any, journalists have done better work in detailing the injustices faced by accused college students than Emily Yoffe. Her succession of meticulously accurate and fair articles in Slate, the Atlantic, Politico, and Reason have exposed unfair procedures faced by white and black students, in public and private institutions. Brodsky’s reaction, during her tenure at the helm of Know Your IX? “There is a special place in hell,” she tweeted, “for women who are Emily Yoffe.”

That the ACLU has chosen to team with a group co-founded by such a figure, targeting regulations that advance campus due process more than anything for a generation, speaks volumes of the organization’s decline as a leader in the protection of civil liberties.

KC Johnson is co-author, with Stuart Taylor Jr., of “The Campus Rape Frenzy: The Attack on Due Process at America’s Universities” (Encounter, 2017).

Stuart Taylor Jr. is co-author, with KC Johnson, of “The Campus Rape Frenzy: The Attack on Due Process at America’s Universities” (Encounter, 2017).