As the spectacle of mass crowds, militarized police and tear gas have faded in the wake of George Floyd’s burial, so too has media interest waned in racism and police brutality. In their place, Covid-19 has come roaring back. And, notably, for the first time in half a decade Donald Trump’s media limelight is beginning to dim.

The timeline below shows the percentage of weekly airtime on CNN, MSNBC and Fox News that mentioned protesting since March 24, using data from the Internet Archive’s Television News Archive processed by the GDELT Project. (Click to enlarge, or view an interactive graph here.)

From a high of nearly 20% of daily airtime to just 1% on June 18, this graph shows just how quickly the media loses interest in a story and moves on. Similarly, despite June being Pride Month, there have been few mentions of LGBT issues, in keeping with a broader lack of interest since Trump’s election. Aside from coverage of Monday’s Supreme Court decision protecting LGBT workers, the media’s attention has proven again to be short and easily distracted.

The most salient case in point: The moment the mediagenic clashes between protesters and police gave way to police-less marches, the focus swung rapidly back to the coronavirus, with coverage ramping up linearly since June 4, as seen below. (Interactive graph here.)

From receiving a steady state of 10%-15% of airtime prior to the protests to a low of 2%-3% during the protests, Covid-19 coverage has climbed back up to 4%-10%. CNN has been the quickest to resume its coverage and is already at two-thirds of its pre-protest coverage levels; MSNBC is just two percentage points below its previous levels. Fox, however, seems to have slowed its return to pandemic news, leveling off at around half its previous coverage level.

CNN has even begun bringing back its infections dashboard, with the timeline below showing the total seconds of airtime each day displaying the graphic. Over the past two weeks it has risen to three hours a day and is increasing linearly towards its pre-protest level of nine hours a day. Even coverage of the John Bolton book critical of the president has prominently featured the dashboard off to the side. (Interactive graph here.)

Most strikingly, the timeline below shows the weekly percentage of airtime on the three news channels devoted to mentions of Donald Trump. Since June 2017 he has maintained remarkably steady media coverage of around 10%-15% of each week’s airtime. Beginning in late February, however, the pandemic began to rapidly displace him, with the president bottoming out the week of March 22. His media coverage increased through the Floyd protests and then diminished the following week. (Interactive graph here.)

While Trump’s media profile has increased slightly, this week he was mentioned on just 5%-7% of the airtime of the three channels. The last time he received so little attention was back in November 2015.

Even Trump’s Twitter account is struggling for attention. The timeline below shows the total number of online news articles monitored by GDELT by month that linked to an @realDonaldTrump tweet since GDELT started tracking tweet links in April 2016. Over the course of this year his tweets have received just two-thirds the attention they did in 2019, bringing them down to coverage levels they haven’t seen since he was a candidate.

Making matters worse for Trump, in the last 30 days, presumptive Democratic presidential nominee Joe Biden received almost a third as many mentions as Trump on CNN, MSNBC and Fox, a quarter as many mentions on the ABC, CBS and NBC evening newscasts and 19% as many mentions on online news. While these numbers are  modest, they represent an enormous change since March.

The streamgraph below compares the number of daily mentions of Trump vs. Biden since Jan. 1 of last year on CNN, MSNBC and Fox News. ((A streamgraph is an area chart where the data series are stacked on top and below of each other around a central axis; positioning above/below is not meaningful — only the relative height of each series.) While the pandemic displaced Trump from the news in late March, Biden seems to have been far less affected by the surge in Covid-19 coverage. The end result is that while Biden is still far from dominating the airwaves, Trump’s previous wall-to-wall coverage has been greatly diminished and is not quickly recovering. (Interactive graph here.) 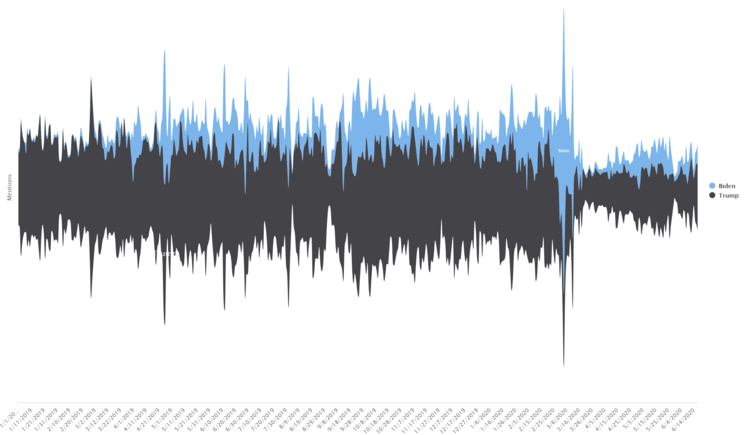 Putting this all together, the media’s fickle attention span is clearly seen in its quick pivot away from the George Floyd protests. Most troubling for Trump as the 2020 election nears is that the media seems to have grown — at least to some extent — similarly bored with him.