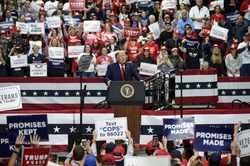 President Trump is clearly relishing the chance for a re-election reset this weekend – to be back in the comfortable role of showman in chief and reality-show ringleader to a packed arena of raucous, cheering supporters.

Just like old times, pandemic and polling be damned.

More than a million people requested tickets for his rally in Oklahoma Saturday, the campaign tweeted earlier this week, and team Trump is going all-in on preparations for the historic event, set to take place as Joe Biden has opened up his biggest lead in the 2020 contest so far – 8.8 points, according to RealClearPolitics’ latest national average of polls

The all-day event will feature musical acts, numerous high-profile surrogates, and the chance for Trump to display – with rows of news cameras running – the intense anti-lockdown anger most of his supporters have been harboring since the coronavirus pandemic began.

That resentment over the way the one-size-fit-all, shelter-in-place rules has tanked the once-strong economy, Trump’s best argument for re-election, has only grown deeper in the last few weeks of racial unrest when Democrats dismissed social-distancing rules for Black Lives Matter protests after bashing lockdown protests as COVID-19 super-spreaders.

While much of the excitement will be inside the arena, outside staffers will be tackling the more arduous and perhaps more important task of engaging supporters, registering them to vote and securing contact information to keep them mobilized in the coming months.

Both Republicans and Democratic groups, as well as other voter-oriented organizations, are way behind in their planned in-person voter registration drives and other traditional components of a strong ground game, which ground to a halt during the pandemic.

David Bergstein, director of the Democratic National Committee’s battleground state communications, stressed that voter behavior is changing so rapidly in response to the pandemic and racial unrest that the impact of voter registrations will likely take a back seat to other issues such as mail-in voting and voter enthusiasm.

Still, he said, Democrats are meeting the registration goals “we need to,” and now hold registration edges in Pennsylvania, Florida, Nebraska, North Carolina, Nevada and Iowa, where there now are more registered Democrats than Republicans for the first time in two decades.

“If you look at the Democratic performance across the battleground states in the last several months, the trend line is very clear,” he said. “Democratic voters are extraordinarily enthusiastic to participate in elections, and we are out-performing and beating Republicans in key metrics like registration and voting by mail and are winning races” in important Wisconsin suburbs and cutting into traditional GOP voter territory in states such as Pennsylvania.

Registered Democrats now outnumber Republicans in all of Pennsylvania’s suburban counties, including Chester, traditionally a Republican stronghold, he pointed out.

The Republican National Committee declined to discuss any specific voter-registration number goals and whether they have been met. Instead, a committee spokeswoman said Republicans already have doubled the number of new voter registrations over 2016. The RNC also stressed the Trump campaign’s work to mobilize voters and ensure they mail in their ballots or get to the polls as a key part of Trump’s re-election strategy.

“Voter registration is absolutely an emphasis in the 2020 campaign, which is why Trump Victory has been focusing on it for years. In fact, we are already well ahead of the curve on these efforts and have doubled the amount of new voter registrations this cycle [over] the entire 2016 cycle,” RNC national press secretary Mandi Merritt told RCP.

For Trump, rallies are an essential part of energizing and mobilizing supporters. They provide “a treasure trove of data and information as tens of thousands of supporters come together in one place,” Merritt said. “Our teams are outside of every single rally registering new voters and updating existing voter files to ensure accurate information come November.”

The information, such as cell phone numbers, emails and addresses, are used to stay in regular communication with supporters.

“No state just comes down to voter registration, because that is step one of the process, and the final step is actually turning them out to vote for your candidate,” Merritt said. “No candidate is a greater motivator than President Trump.”

Both sides claim an intense focus on the ground game, but there’s plenty of evidence the coronavirus lockdowns have run the voter-registration part of the equation off the rails.

“Spring and summer are busy seasons for voter registration every year, but in the presidential years we see a massive increase,” Jeanette Senecal, the director of mission impact for the League of Women Voters, told RCP. “That’s not been the case in 2020 because of the coronavirus. As it’s impacted all aspects of American life, the COVID-19 pandemic has greatly impacted in-person voter registration this spring, and we’re expecting that to continue into the summer.”

League volunteers were planning to register students at 850 high schools around the country, leading up to graduation. They expected to offer to register 140,000 new citizens at 1,600 naturalization ceremonies between January and November 2020. The coronavirus disrupted those plans.

In recent days, some groups on the left have tried to offset the time lost with a big digital push to register voters online. Groups such as Vote.org and Rock the Vote have reported hundreds of thousands of new online registrations in the first week of June, attributing it to a surge in civic interest linked to the national protests against racial injustice and outrage over the death of George Floyd. Some protests have included booths where those supporting the movement can register to vote.

This week the Southern Poverty Law Center, a liberal group, announced a $30-million initiative called Vote Your Voice to increase voter participation among people of color who historically have had lower turnouts in Alabama, Florida, Georgia, Louisiana and Mississippi.

It’s hard to tell whether those new methods will pay off in November. Both the Trump and Biden campaigns last summer said they were laser-focused on voter-registration efforts, RCP reported last June. The pro-Trump group, America First Policies, said it planned to spend $20 million on voter registration efforts in the battleground states of Florida, Pennsylvania, North Carolina and Georgia.

The big prize was Florida, where, as of last summer, 4.96 million voters were registered Democrats, 4.7 million were registered Republicans, and an estimated 9 million eligible voters were unregistered. In 2008, Florida Democrats held a 700,000 voter-registration lead over Republicans but saw that dwindle to roughly 260,000 during the 2018 midterms.

But those goals have not panned out, according to the most recent registered-voter numbers reported by the Florida Secretary of State. Democrats have increased their edge over Republicans, but only by 20,000. As of April 2020, the latest numbers available, there were a total of 4.85 million active Republicans compared to 5.13 million Democrats in Florida.

While in-person voter-registration drives are nearly nonexistent, the lion’s share of the spring declines in new voter registrations are also directly linked to motor-voter offices being closed because of the pandemic. The Center for Election Innovation and Research, a nonpartisan nonprofit, has released a study showing new voter registrations in 12 states and the District of Columbia plummeted 70% in April compared to January. In Florida, there were 77,000 new registrations in January, with that number sliding to 21,000 in April.

David Becker, director of the center, said in such an unprecedented election climate, it’s difficult to predict how the COVID-19 setbacks will hurt or help both candidates’ ground games.

Voter-registration drives may not be as instrumental as the changing nature of voting itself, how voters respond to expanded mail-in options spurred by COVID-19 social-distancing efforts, and the anticipated high voter enthusiasm for participating in this presidential election with so many contentious news events  shaping it, he said.

Becker pointed to Georgia’s June 9 primary, which was postponed from March. Absentee ballots were sent to every voter, with 1.1 million returned. Total Democratic turnout surpassed the previous record of 1.06 million in the 2008 primary, when Barack Obama beat Hillary Clinton in a landslide.

The total turnout for the Georgia primary far outpaced previous voting records even though there were no big contested races to determine.

Because of expanded mail-in voting options, “it blew any record away, but there were still 800,000 people who showed up to vote on a 90-degree day in the rain in pandemic conditions – that’s more than a bit inspiring,” Becker said.

Still, he argued, during the pandemic, when mail-in voting is being greatly expanded across the country, “it’s more important than ever to get voters to register early.”

“Because a lot of motor-vehicle agencies haven’t been open in the last four months, that’s going to be more of a challenge than ever when the need is the greatest,” he said.

Babyteeth and You Should Have Left – Reason.com