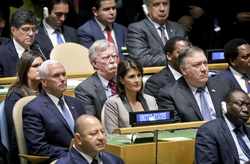 As far as exit interviews are concerned, this one was unofficial and especially ugly.

In his forthcoming book, “The Room Where It Happened,” John Bolton condemns President Trump as a bumbling executive and mocks Treasury Secretary Steve Mnuchin as a political opportunist and dismisses Secretary of State Mike Pompeo as generally averse to conflict.

But he doesn’t stop there, as one rising GOP star is finding out.

The highly unflattering 494-page tome, cataloguing the former national security adviser’s time in the Trump White House, seems destined for bestseller lists — that is, if it can get published. Citing national security concerns late Wednesday, the Department of Justice asked a judge to issue a restraining order.

But copies are already floating around Capitol Hill, and regardless of what the court rules, a harsh picture of Nikki Haley is among the portraits emerging. The U.S. ambassador to the United Nations during much of Bolton’s tenure acted like a “free electron” more concerned with political ambition than international diplomacy, according to a copy of the book obtained by RealClearPolitics.

Haley, the rare Cabinet member to leave the White House on good terms with the president, is considered a top presidential aspirant in a post-Trump Republican Party. Bolton seems intent on denting that reputation.

After Syrian President Bashar al-Assad unleashed a chemical attack on his own people, Bolton suggested that Haley stand with ambassadors from the United Kingdom and France in the U.N. Security Council to present a united front against the rogue leader.

“I had done that many times,” Bolton wrote, “but Haley declined, preferring to have pictures of her alone giving the U.S. statement in the Council. That told me something.” It was indicative, he added, of an “untethered performance in New York over the past year-plus,” and Bolton, still new in his job at the time, made a note to discuss the performance with Pompeo.

A hawk when it comes to military intervention, Bolton advocated a muscular response during a meeting in the Situation Room. Others were opposed, he recounts, especially Haley, who “explained that her husband was in the National Guard, so we should try to avoid military casualties.”

An alumnus of both Bush administrations, Bolton has advocated for regime change in Iran, Syria, Libya, Venezuela, Cuba, Yemen and North Korea. He was also an early and enthusiastic proponent for the war in Iraq. Though not as hawkish, Haley was by no means a dove while at the U.N., a post she left at the end of 2018. When North Korea continued testing intercontinental ballistic missiles despite international condemnation, she warned that the United States was willing to use military force in response, a performance that won her high praise in many conservative circles and fueled presidential speculation for the former South Carolina governor.

Some of that praise came from within the first family, namely from Jared and Ivanka Trump. Both advisers to the president were so taken with Haley, Bolton alleges, that they actively lobbied Trump to replace Vice President Mike Pence with her on the ticket ahead of 2020.

Interest in a swap grew so intense that Haley herself eventually had to tamp it down. “Enough of the false rumors,” she tweeted last August. “Vice President Pence has been a dear friend of mine for years. He has been a loyal and trustworthy VP to the President. He has my complete support.”

Bolton still insists that the former ambassador was angling for the job, and after attacking her handling of sanctions against Russia and the U.S. withdrawal from the U.N. Human Rights Commission, he asserts that Haley was more interested in getting her photo taken to climb the political ladder. He alleges that she sought Trump’s permission in June of 2018 to take a diplomatic envoy to meet with the Dalai Lama.

“The purpose of this trip was unclear, other than getting a photo op with the Dalai Lama, always good for an aspiring pol,” Bolton wrote. “The minefield she strayed into by raising the China trade issue showed a political tin ear: Once Trump wondered how China would view Haley’s seeing the Dalai Lama, the trip was essentially dead.”

The episode, he concluded, “confirmed to Pompeo how far out of line Trump had allowed Haley to drift, and why it had to stop.”

Others were apparently unimpressed or threatened, none more so than former Secretary of State Rex Tillerson. Bolton recounts a conversation he had with Trump in the Oval Office where the president claimed that Tillerson told Haley, “You’re nothing but a c***, and don’t ever forget it.”

Even Bolton questions whether Tillerson actually said this. Clearly opposed to such language, he noted that such insults would mean automatic termination in any other administration. But if the nation’s top diplomat had not actually uttered those words, he wrote, “why did Trump tell me he had?” Bolton included it in the book anyway.

A spokeswoman for Haley did not return request for comment.

The criticism could be harmful for Haley, who has remained far from the partisan fray.  If she plans on a return to Washington, the barbs could hamper her rise. Bolton has numerous strings to pull among the GOP establishment. He has served three presidents, knows many fundraising kingmakers, and — until recently — could be seen regularly on Fox News.

But Haley has something Bolton does not: the approval of the president.

Bolton was not as lucky. “He is a liar,” Trump told the Wall Street Journal Wednesday evening before adding that “everybody in the White House hated John Bolton.”