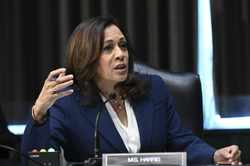 In politics, as in baseball, June predictions aren’t the wisest — especially when it comes to forecasting presidential running mates. That said, Joe Biden has done a favor for those of us who engage in idle “veep” speculation. By limiting his choices to strictly double-X-chromosome, the Democrats’ nominee-in-waiting has a tapered list of options. And if recent news accounts are to be believed, at the top of said list is California Sen. Kamala Harris, who at this time in 2019 was a presidential hopeful.

Let’s suppose that Harris does wind up on the Democratic ticket and, come November, she’s elected as America’s 49thvice president. Then the real fun begins — back in Sacramento, where Gov. Gavin Newsom would choose Harris’ Senate successor (her current term expires in 2022).

This last happened in the Golden State in 1991, with a newly elected Gov. Pete Wilson choosing his own replacement — Wilson having served in the U.S. Senate since 1983. That process was also constricted, as the chief concern was finding a fellow Republican who shared Wilson’s pro-choice views on reproductive rights. Wilson handed the job to John Seymour, a little-known state lawmaker who went on to get trounced by Dianne Feinstein the following year (not coincidentally, a congressional “Year of the Woman”).

If only Newsom, like Biden (and Wilson), had such limited criteria.

For openers, California’s governor could appoint himself (it’s happened before, in other states).

OK, I’m kidding. Although, given California’s losing streak – wildfires, massive power outages, a pandemic and a cratered economy all since last October – Newsom maybe regrets not running for the open Senate seat Harris scooped up back in 2016.

Door No. 2: Newsom could attend to the business of eliminating a potential rival in the 2022 gubernatorial race. That might mean giving the Senate seat to billionaire Tom Steyer, like Harris a 2020 presidential hopeful and, more recently, the chair of the governor’s economic recovery task force.

But that’s not so much a portal as it a trap door for Newsom. In woke California, the last thing he wants is fallout should he do the same as did Wilson in 1991 – confer a Senate seat to a privileged white male. Such is the political headache that Vice President Kamala Harris presents: whomever Newsom chooses, he’ll offend one or more factions of a California Democratic Party that swims in identity politics.

Let’s suppose Newsom wants to do a historic “first” and tap a prominent Latino officeholder like State Attorney General Xavier Becerra or California Secretary of State Alex Padilla. As a female has held both of California’s Senate seats dating back to 1993 (Harris, Feinstein, Barbara Boxer), women’s groups wouldn’t be amused. And that’s not a good way for Newsom to begin a 2024 presidential bid.

Given Harris’ own heritage (her parents are of Jamaican and Asian-Indian descent) and the current conversation about race, Newsom could promote Rep. Karen Bass, the chair of the Congressional Black Caucus and the lead on the House Democrats’ policing-reform effort. But by doing so, Newsom would risk offending Latinos (about 35% of California’s adult population, versus only 6% that’s black), as well as possibly antagonizing Asian-Americans (15% of California adults) likewise looking for a breakthrough U.S. senator.

And there’s yet another consideration: sexual orientation.

Well before he became California’s governor, Newsom was best known in political circles as a godfather of same-sex unions – his issuing of marriage licenses in early 2004, as San Francisco’s mayor, a precursor to the practice becoming legal nationwide (some John Kerry fans would have you believe Newsom’s act of defiance cost their man the presidency).

So there you have it – and please understand that the following is not meant to be disrespectful to any member of our society, but rather to underscore the trap that identity politics can create.

Were a Biden-Harris ticket to prevail in November – and, in order to remain cutting-edge-California cool and to placate the p.c. mob in this age of identity-driven politics (this is taken to a facetious extreme, of course) — Gavin Newsom would have to send to Washington a woman or someone gender-fluid, either of no known ethnicity or with ties to three or more non-white voting blocs.

Ideally, that would be a Californian over the age of 30 (the Senate’s age minimum) who’s not discernably heterosexual – a true deep-blue Democrat (no wiggle room there) who’s an absolutist on climate change, gun control, universal healthcare, sticking it to the rich, and a fervent apostle of the view that Trump hijacked the 2016 election.

Sound silly? Let’s see what the nation looks like once this election is over.