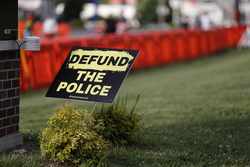 The protection of life, liberty, and property are cornerstones of our republic. As a former police officer, a former congressman, and the current Louisiana attorney general, I’ve had the privilege of working alongside the men and women dressed in blue who are on the frontlines in our communities. Almost all of them are heroes who work tirelessly to keep us safe. They selflessly put themselves in harm’s way to confront uncertainty and danger when we need them.

The Democrat refrain to “defund the police” is dangerous. At best, it is designed by lawless liberals to push an extremist agenda. At worst, it’s intended to create communities of chaos and undermine the economic and political stability of our nation. Defunding the police has nothing to do with reform in the wake of George Floyd’s killing and everything to do with disturbing the peace and disrupting years of progress.

Graffiti messages of “ACAB,” “F the 12,” “Capitalism is Murder,” and other hate phrases have been spray-painted on courthouses, statues of Abraham Lincoln, and small businesses. They are not part of any conversation we should have as Americans, and I don’t believe they summarize the feelings of the majority of protesters. This hateful and destructive propaganda is done purposefully by antifa to sow deeper divisions in our communities and stifle discourse.

I entered politics to serve. It’s the same reason I wore a badge, and the reason I went to law school. Discussions centered on meaningful and lasting reforms to make our country better are at the heart of our republic, but there’s no place for the violence, damage, and destruction being waged by antifa. This left-wing extremist group claims to be fighting injustice but, ironically, small business owners who serve marginalized communities, residents of majority minority neighborhoods, and law enforcement officers who protect these individuals have been the victims of antifa’s vitriol and hatred.

I believe in the rule of law and have spent my career protecting and defending it. Our civic and political leaders have an obligation to promote stability and order, not cheer on anarchy. Unfortunately, last week a Democrat attorney general cheered the burning of America, and this week senior policy advisers to Joe Biden endorsed the defunding of police. Americans must demand that their leaders do better. While politicians can passionately pursue systemic change through advocacy and proper legislative channels, they do not cede their moral imperative and legal obligation to enforce the rule of law and ensure stability for all citizens.

George Floyd should still be alive. His death is a tragedy that should not have happened, and our legal system is ensuring the rule of law is being followed so those responsible for his killing face the consequences of their reckless actions.

Unfortunately, too many innocent victims, from law enforcement officers to minority store owners to residents, have unfairly faced the consequences too, as their lives, livelihoods, homes, and neighborhoods have been destroyed.

As American cities burn, now more than ever before we need law and order, not the anarchist solution of “defund the police” nor the reckless politicians who are fanning the flames of destruction and encouraging lawlessness. We believe that our greatest days are yet to come – that means we must always seek ways to do better, to improve, and to ensure the freedom to fail or to succeed is bestowed upon every American.