A Hollywood Ending for the Coming U.S.-China Divorce 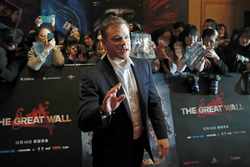 Let’s face it. The marriage of superpowers looked great on paper. Globalists and free market proponents, seeking earnings growth and the prospects of slowly democratizing the People’s Republic of China, eagerly arranged it. The courtship began in 1972 when Richard Nixon and Henry Kissinger first set foot on the soil of China’s 4,000-year-old nation. The relationship then blossomed for decades, culminating in the 2008 story-book wedding, the Beijing Summer Olympics. American sponsors Coca-Cola, General Electric, Johnson & Johnson, McDonald’s, Nike, and Visa, as well as athletes like LeBron James and Michael Phelps, arrived with great fanfare to represent our nation’s nuptial commitment to China. Hollywood’s presence was absent, but that was to be short-lived.

Though many of our great nation’s companies and athletes, particularly from the NBA, had substantial histories with China by that point, the movie studios had not. After those Summer Games ended, China’s Communist Party prioritized the growth of various industries, aiming to boost their middle class. The film industry was one of those, and Hollywood jumped in. China soon had 5,000 movie screens, and they multiplied dramatically over the next decade to the more than 70,000 today. Hollywood’s share of China’s box office riches followed similar course.

Other American companies in various industries experienced identical growth trajectories. China’s 1.4 billion customers were just as hungry for world-class movies as they were for Buicks, Kentucky Fried Chicken, and Starbucks. Even better, consumers absorbed the soft power influence of aspirational democratic values and principles emanating from each product, though none could compare to the stories produced by our fabled studios. Movies, by far, were the strongest and most engaging form of Western propaganda. The CCP understood that. To them, movies weren’t just a product of commercial exchange. They were also a vehicle for cultural exchange. Films mixed the two evenly and potently.

I see the U.S.-China relationship connected like a cell phone connects to a cell tower. In the perfect scenario globalists hope for, there are five bars of service connecting the two. I compare those five bars to five diplomacy forces that either connect or distance our countries: politics, national security, human rights, culture, and commerce. In the misguidedly arranged marriage between the U.S. and China, three of those forces never shared nor will share common ground —politics, national security, and human rights. In fact, through events such as the trade war, Hong Kong protests, Uyghur controversy, information war, gutting of domestic manufacturing, South China Sea conflict, Taiwanese election, supply-chain disruption, and COVID-19 crisis, divisions affecting each force have never been more amplified. The best we can hope for is both countries agree to disagree on each. And since these three absent forces represent a majority of diplomatic glue necessary to hold the marriage together, I highly recommend the superpowers file immediately for divorce.

However, the split can and should be amicable. Why? Because the other two forces — culture and commerce — can continue to exist bilaterally. That’s where Hollywood comes into play. Hollywood forges the bilateral exchange of culture and commerce. With Tinseltown involved, there will always be connective tissue between the superpowers. The cell service will work, at least with two bars.

Those remaining bars can keep our nations in a constructive relationship continuing through the decoupling. They’re capable of more change than presidential visits, parades, political speeches, or even military force. One could argue that Big Macs (commerce) and David Hasselhoff (culture) had more to do with the end of the Cold War than an arsenal of nuclear weapons, so they surely could prevent one too. And this diplomatic effect is also good for business — really good! I witnessed it first-hand as a production executive on the films “Iron Man 3” and “Looper,”and I’ll watch from afar with Disney’s upcoming “Mulan.”

Even as our nation grows more hawkish, I still must stress the importance of looking at China as a massive opportunity. With respect to Hollywood, true China hawks must keep in mind that with every American movie monetizing China’s massive market, American influence goes with it. Each one touches the Chinese people with the subtle soft power of artistic freedoms, storytelling, democratic principles, and culture. Economically, the growing Sino-consumption of Hollywood’s best-in-class product creates jobs and increases our nation’s gross domestic product.

I implore steadfast hawks to recognize such promise. And though this bilateral exchange of culture and commerce benefits Americans, we can’t be reckless with it. We must protect our nation’s interests moving forward. For example, Sen. Ted Cruz suggested prohibiting the CCP from censoring Hollywood’s films beyond China’s borders. I agree. Paramount should not be forced to remove the Taiwanese flag from the global cut of “Top Gun’s” sequel. If the CCP wants to censor that flag in their market, fine, but outside of it, they have no jurisdiction. Our nation then needs to protect Paramount’s creative freedoms by preventing CCP retaliation.

We also must cure imbalances on an economic and protectionist level. Studios receive a paltry 25% of each dollar their films generate in China, roughly half of the global norm. That needs to increase. Additionally, China must end its annual market-access quotas for foreign films, presently limited to just 35. Approving market access to more international films provides studios the ability to monetize while also mitigating piracy – another item the CCP must deter and enforce.

Bottom line, the arranged marriage between the U.S. and China was well-intentioned, but the differences between the superpowers prohibit the nuptials from lasting. However, Hollywood applies two key forces of common ground, creating the glue for a strong post-divorce bond utilizing new rules to make things fair. But, if bilateral cultural and commercial exchange stops, the final two bars of cell service go blank. The connection between cell phone and cell tower ends. The world’s two superpowers stop communicating, and a new and mighty cold war begins… Ever escalating… With no end in sight….

Chris Fenton is an author, media executive, producer, and U.S.-Asia Institute trustee. His book, “Feeding the Dragon: Inside the Trillion Dollar Dilemma Facing Hollywood, the NBA, & American Business,” can be pre-ordered at www.feedingthedragonbook.com. Twitter @TheDragonFeeder.